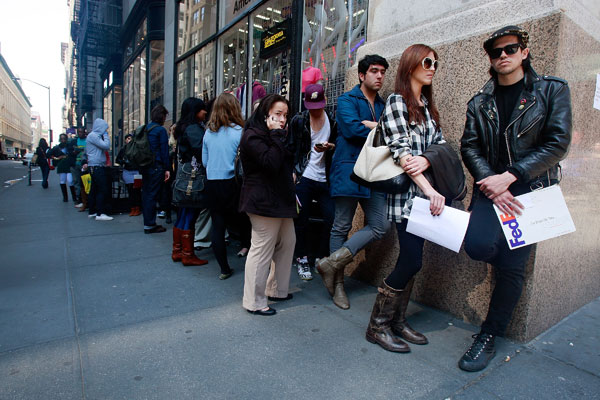 On April 2 in New York, job seekers line up to apply for non-union positions at American Apparel, a store that sells clothes made by non-union workers.

Shilling on the Corporate Dollar

Richard Epstein, who has attacked the minimum wage and unemployment benefits, argues that sweatshop conditions can only be ameliorated by market forces, not by laws and unions.

Testifying before the Senate labor and health committee hearing in March, economist Anne Layne-Farrar of the corporate consulting firm LECG warned about the horrendous impact of the Employee Free Choice Act. Its potential to increase union membership from between five and 10 percent, she said, “would result in an increase in the unemployment of around one and a half to three percentage points. These are sizable effects for the U.S. economy.” Earnest and well-prepared, Layne-Farrar cited her study that concluded that 600,000 jobs would be lost in the first year after the Employee Free Choice Act (EFCA) became law. Fox “Fair and Balanced” News, naturally, in its TV report neglected to mention that her “research” was funded by the corporate-friendly, anti-union “Alliance to Save Main Street Jobs.”

Since the report’s publication in March, this statistic has circulated through the media, showing up on MSNBC, CBS News, The Wall Street Journal and, in spades, Fox News. EFCA has been Swift-Boated for purportedly taking away the secret ballot from workers. But union supporters say it will level the playing field, offering workers the choice of whether to form a union either through an election or “card check”­–the majority sign-up of authorization cards. Plus it toughens penalties and mandates arbitration after 120 days if employers refuse to negotiate in good faith.

Yet business interests have used Layne-Farrar’s study and that of prolific legal scholar Richard Epstein of the University of Chicago to tell a different story. Ads citing the “600,000” statistic appeared on Politico and other political insider publications aimed at buttressing anti-union lobbying that targets moderate senators such as Arlen Specter and Blanche Lincoln, who subsequently backed away from the EFCA legislation.

Epstein, by some measures the third-most cited law professor in the country, has issued two major reports and five op-eds for the Wall Street Journal and other publications denouncing EFCA as a job-killing, unconstitutional “regime.” His wide-ranging attack on the pro-union bill for Stanford University’s Hoover Institution was paid for by the same Alliance to Save Main Street Jobs that subsidized Layne-Farrar’s work. In the past Epstein, an extreme libertarian, has attacked minimum wage and unemployment benefits, denouncing such New Deal legislation as unconstitutional “takings” that violate the Fifth Amendment. That is no surprise. Epstein has argued that, historically, sweatshop conditions can only be ameliorated by market forces, not by laws or unions. He told In These Times: “The level of wages will be determined by the intersection of supply and demand…the escape from that system is not driven by unions, which cannot increase productivity.”

Epstein’s past work is even a bit too radical for his business backers. He told In These Times that he is “unrepentant” about his earlier writings, but he concedes that his corporate-funded sponsors have asked him to omit some of those previous arguments when attacking EFCA.

Progressive bloggers, law professors and economists have launched counter-attacks, but these conservatives’ talking points, theories, and, most importantly, their data cannot be easily marginalized. In fact, they strengthen the hyperbolic rantings comparing the bill to the Gestapo or Islamic terrorism, claims that may seem laughable to progressives, but set the tenor for the debate in Washington. And Layne-Farrar’s and Epstein’s conclusions serve as the academic veneer for the PR blitz that has tried to demonize the Employee Free Choice Act.

Despite the wide dissemination of Layne-Farrar’s report, critics like Chris Kromm of the Institute of Southern Living have found distortions and shoddy analysis in her work. Of the 10 Canadian provinces she studied, Kromm discovered that only three actually had significant changes in card check rules. And he found that the report itself acknowledged there wasn’t enough data to draw conclusions about the impact of card check. It further admitted that the provincial card check data they did collect was too “weak” for economic analysis. Kromm also wondered, “If unions really were the cause of unemployment, why has Canadian unemployment risen in recent years…even as union membership has declined?”

But Layne-Farrar massages the data using a complex “regression analysis” to connect the dots between card check, higher unionization rates and more unemployment, putting the loss at between 600,000 and 2.6 million new American jobs in the first year.

“That’s bullshit,” says Canadian labor economist Charlotte Yates, now the Dean of Social Sciences at McMaster University in Hamilton, Ontario. “I don’t know of any credible economists who say [now] there is a direct correlation between unionization and the rise in unemployment.”

Even so, Layne-Farrar invokes her use of “regression analysis” as a sort of holy totem to ward off criticism of her work from other economists who cite what she says are “simplistic correlations.” These include studies showing that countries such as England, Denmark and Norway have higher unionization and lower unemployment rates than the United States. She says, “This is empirical analysis, not an opinion piece, with results based on publicly available data and using well-accepted econometric tools. You can’t rig these.”

John DiNardo, a labor economist at the University of Michigan and author of the textbook Econometrics retorts, “Just because she calls it ‘econometrics’ and ‘regression analysis’ doesn’t mean that it makes any sense.” While some earlier research had found a link between unionization and unemployment, more rigorous, recent research in Europe and the United States has found no connection between unionization and unemployment. In fact, Layne-Farrar’s study concocts a negative jobs impact from unionization that is 200 to 300 percent higher than even the most critical anti-union research.

Behind the statistical wizardry

Here’s where it helps to look behind the curtain of her statistical wizardry designed to dazzle common folk and legislators alike with econometrics. Her regression analysis supposedly aims to tease out the factors driving unemployment increases. But, DiNardo says, if unemployment shoots up and the unionized percentage of the workforce goes up, that could just as well be caused by more non-union workers getting laid off–while union members still keep their jobs. Hence, the percentage of unionized workers increases.

How do you get around this thorny problem if you want to blame unions for unemployment? Layne-Farrar purportedly “corrected” for the hopeless muddle of such simultaneous factors by, in part, merely measuring the unionization rates a year earlier than the unemployment rates. Presto! Unionization causes massive unemployment, she concludes. “She has very poor research design,” says DiNardo. “She doesn’t have anything resembling a natural experiment.” And he says that his review of the economic impact in America of unionization shows the “the casual effect of union recognition is zero.”

But for Epstein, the virtually unanimous opposition of business groups to the pro-labor legislation is proof positive that it will be “a job-killer of the worst sort.” In his report for the Hoover Institution, he paints an Edenic portrait of a non-unionized labor market, and laments the passage of the National Labor Relations Act in 1935 that legalized unions. “If the National Labor Relations Act offends every principle of the voluntary exchange of private property, this new bill is much worse,” he says. “I’ve never seen a statute so draconian.”

Epstein is the labor market equivalent of Candide’s Dr. Pangloss: If employers could just be left alone, all things work for the best in this best of all possible worlds. If there were no minimum wages laws, for instance, Epstein told me, “Wages would go up because productivity gains would offset any short-term losses [to workers].”

Such anti-union assertions don’t take into account the real world of employment–and the justifiable fear of being fired. Kim Bobo, author of Wage Theft in America, asks, “What bubble does he live in?” Even the Bush labor board found that nearly 30,000 workers are illegally fired or discriminated against each year because of union activity. And these researchers don’t really consider the widespread estimated $19 billion in wage theft.

While Epstein’s more radical views are left off the table, his intellectual firepower adds to the impact of his arguments against EFCA. Both Epstein and Layne-Farrar see an idealized world waiting to be born where unions don’t exist, and where workers and businesses thrive without them.

The question remains, will Washington politicians still listen to business interests that use these researchers’ dubious claims to argue, as Epstein does: “Unions are a bad deal for most workers.”