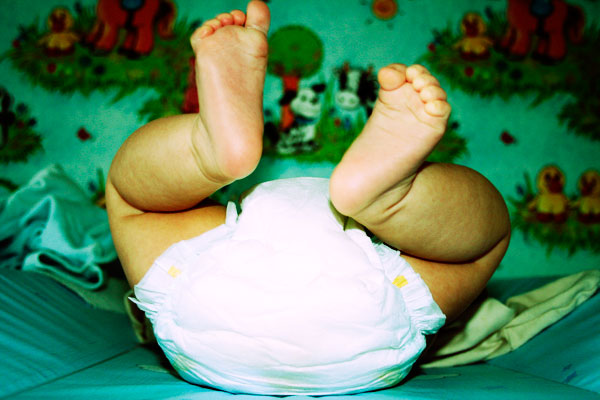 The Poop on Population

Disposable diapers harm the environment, so here’s a modest proposal.

Every year 250,000 trees and 3.5 billion gallons of oil go into keeping the bottoms of American babies dry and happy.

You can’t pick up a newspaper or a gossip magazine these days without being hit in the face with news about another super-family. And while I was busy following the progress of Octo-Mom’s brood of tiny bundles and keeping up-to-date (but pretending I’m not) with the shenanigans of Jon, Kate and their eight, I somehow overlooked the news that Jim Bob and Michelle Duggar, the Arkansas couple with 18 children, are expecting a grandchild in October. Well, glory hallelujah! Just what the world needs–another American consumer.

The world’s population is spiraling out of control, and United Nations estimates suggest that the current 6.7 billion will have grown to 9.2 billion by 2050. Already, we cannot provide a large percentage of these people with the basic needs of food and water. But here in the United States, we have plenty of food; our population isn’t in danger of going hungry and we can feed 18 children, no problem. But our measly 4 percent of the world’s population accounts for 25 percent of greenhouse gases. The problem here is not hunger, but consumerism and the environmental impact each of us has. More Americans equal more pollution, and it begins at birth.

On average, a single baby will go through 5,000 to 7,000 diaper changes in the first two years of life. This means that Nadya Suleman’s octuplets will need as many as 56,000 diapers and the Duggar brood has already used well over 100,000! Where do all of these diapers come from and where do they go to? Well, they come in boxes from Target or Wal-Mart, and once they’re all nasty and poopy they disappear, like magic, into the Diaper Genie. Poof! Nearly 18 million amazing vanishing acts performed every year.

But of course it doesn’t really work like that, does it? Diapers are feats of modern engineering, a combination of trees and petrochemicals molded into ultra-absorbent, disposable miracles. Every year 250,000 trees and 3.5 billion gallons of oil go into keeping the bottoms of American babies dry and happy. That amounts to 3.5 million tons of diapers headed for landfills to spend the next 200 to 500 years decomposing, kicking out greenhouse gases, and leaching all of the toxins associated with the disposal of human waste into the soil and eventually into our water supply. Figure in the impact of chemical by-products like dioxin created during the manufacturing process, add the carbon cost of transportation from China and the packaging–one cardboard box per baby per week, on average–and it’s easy to see why disposable diapers are such an environmental nightmare.

And all this before the baby is even big enough to become a serious consumer and polluter.

It’s a tough call for environmentally conscious parents, and debates rage back and forth about the pros and cons of cloth versus disposable diapers. Even traditional cloth diapers have their own set of environmental hazards that come along with producing, delivering, bleaching and laundering. But babies need diapers, lots of them.

Big families were once necessary to ensure that at least some of those offspring made it to adulthood to reproduce and continue the family line, but with modern medicine and our current standard of living, infant mortality rates are low and life-threatening childhood diseases have all but been eradicated. Plus, child labor laws mean that little Billy no longer has to head for the coal mines or the chimneys to earn enough to help feed the little ones. Unless you’re one of the approximately 200 million women worldwide who do not have access to birth control options, there’s no real reason for producing a bigger-than-average brood.

Michelle Duggar explains that her enormous family came about because the loss of her first child through miscarriage was God’s punishment for using birth control. So she renounced the pill and the results are evident, with her current brood now numbering more than eight times the national average birthrate of approximately 2.1 births per woman, a figure already significantly higher than that in other developed nations such as Canada, Germany and the U.K. And there are no signs that Duggar plans to stop at 18.

God may want us to value life and reproduce like it’s going out of fashion, but I’m pretty certain that the same God would prefer a planet that is inhabitable for all His creatures. I myself subscribe to the evolution school of thought and firmly believe that if the human race keeps destroying its own natural habitat, we’re going to evolve ourselves right out of the picture, which may ultimately be the best thing for the planet and its remaining species.

Every American, including Octo-Mom, is responsible for doing his or her part to reduce the damage caused by their overconsumption. We need to drive smaller cars shorter distances, learn to value our natural resources, and consider the source and ultimate disposal of the products that we buy. And perhaps it’s also time to reconsider the number of new mega-consumers that we bring into the world.

Lisa Manterfield is a California-based freelance writer whose essays have appeared online and in print in the Los Angeles Times magazine, Mad As Hell Club and Latitudes & Attitudes. She recently completed her debut novel, Waiting for the Big One. She lives in Redondo Beach with her husband and cat.