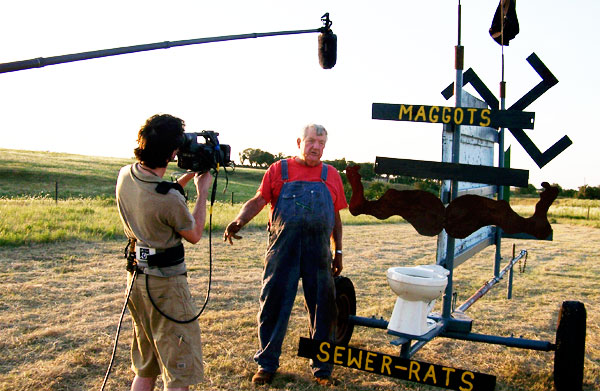 An eccentric Kansan. (Photo courtesy of What’s the Matter with Kansas?)

A new documentary details how politics and religion intersect in America.

The new documentary What’s the Matter With Kansas? is a funny, smart and important look at the intersection of religion and politics in America today. Loosely based on the 2004 book by Thomas Frank, it tells the stories of several conservative Kansans who care deeply about hot-button cultural issues like abortion and gay marriage. According to Frank’s polemical thesis, Republicans succeeded in getting poor whites to vote against their own economic self-interest by focusing on these issues.

However, filmmakers Laura Cohen and Joe Winston devote little of the film’s 90 minutes to Frank and his argument, focusing instead on the lives and motives of their subjects. The documentary begins by following a Democratic canvasser who visits the home of a Republican who explains that he could never support the Democrats because they’re “pro-abortion, pro-homosexual, pro-gun control.” Then it shifts to a market where the Kansas Democrats booth can’t attract a crowd, while the “Choose Life” booth is busy signing up recruits and selling plastic babies for 25 cents.

Frank’s book and this movie are both vulnerable to accusations of condescending elitism, Frank for his thesis and the movie for its focus on the eccentric Kansas personalities. To be sure, the film sometimes provokes laughter at its subjects’ expense, such as on the Barden family’s trip to the always-ridiculous Creation Museum in Petersburg, Ky. Still, the depth of the connection that develops between the subjects and filmmakers–and, eventually, the audience–stops this from being mere mockery.

In the hands of someone determined to ridicule conservatives, Angel Dillard’s CD release party, featuring performances of such tracks as “When Satan Comes A-Callin’”, would make an easy target. But that scene comes late in the film, after we’ve learned to understand her as a person rather than as a stereotype. As Joe Winston noted in the Q&A that followed a Chicago screening, “This movie’s all about not generalizing about people.”

The movie briefly traces the history of the conservative movement in Kansas, which blossomed in 1991 during the anti-abortion “Summer of Mercy” blockades in Wichita. Mark Gietzen recalls how he recruited people there to run for precinct committeeman, and an overwhelming number won. By 1994, popular Democratic Rep. Dan Glickman lost. He was beaten, he says, by “people who had never been involved in politics.” Glickman reports that he did best in the high-income, Republican parts of his district.

It wasn’t all about abortion. Glickman was also hurt by his pro-NAFTA stance. Dale Swenson, a union worker, recalls, “I thought, ‘Well, there’s nothing left for me to vote for in the Democratic Party.’ ” This point is the other part of Frank’s argument: Republicans may be fooling working- and middle-class voters with the culture wars, but Democrats are equally responsible for their losses by refusing to stand up for economic values. Others in the documentary have a similar view, such as Kansas Farmers Union president Donn Teske, who resigned from the Republican Party but notes, “I’m a populist without a party.”

What’s the Matter With Kansas? doesn’t fully answer the question in its title. But it provides a funny, in-depth analysis of the intersections between religion, economics and politics. It’s a movie that needs to be seen in both red and blue states, by liberals and conservatives alike.