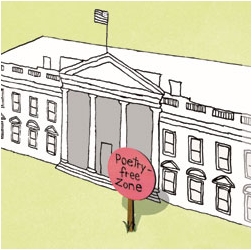 Poets Against the War

BY Joe Knowles
Share TweetReddit0 EmailPrint
When First Lady Laura Bush decided to host a literary salon on February 12 about “Poetry and the American Voice,” she invited the nation’s leading poets to come to the White House for some elegant chit-chat on the works of Emily Dickinson, Langston Hughes and Walt Whitman. The sleepy, grant-fed American poetry establishment, well-conditioned to sing for its supper and keep politics at arm’s length, rarely dares to court controversy—especially in Washington. But Mrs. Bush was in for rather a rude surprise.

When the respected editor and poet Sam Hamill opened his invitation to tea with Laura, he writes, “I was overcome by a kind of nausea. … Only the day before I had read a lengthy report on George Bush’s proposed ‘Shock and Awe’ attack on Iraq, calling for saturation bombing that would be like the firebombing of Dresden or Tokyo, killing countless innocent civilians. Nor has Bush ruled out the use of nuclear weapons.”

Hamill decided to make the First Lady’s “symposium” very special indeed. But when Mrs. Bush got wind of plans circulating among Hamill’s colleagues to bring antiwar poetry to the White House, she “postponed” the event, saying through her spokeswoman that it would be “inappropriate to turn a literary event into a political forum.” The date has not been rescheduled.

Nor is it ever likely to be, judging from the reaction Hamill has been getting since he launched a Web site, www.poetsagainstthewar.org, and declared February 12 a national day of poetry against the impending carnage in Iraq. The Web site quickly ballooned with more than 5,000 poems (and counting), and more than 160 readings were speedily scheduled across the country for the 12th. Hamill’s online chapbook features poetry by the likes of John Balaban, Gregory Orr, Rita Dove, Lawrence Ferlinghetti and Adrienne Rich, as well as a statement by Pulitzer Prize winner W.S. Merwin, who angrily writes: “To arrange a war in order to be re-elected outdoes even the means employed in the last presidential election. Mr. Bush and his plans are a greater danger to the United States than Saddam Hussein.”

Other poets signing on to the antiwar movement include Stanley Kunitz, Marilyn Nelson, Jay Parini, Jamaica Kincaid, Grace Paley and even U.S. Poet Laureate Billy Collins, a famously gentle ironist not generally known for making political stands. It’s one thing when such notably engaged writers as Rich or Ferlinghetti speak out, but when protest extends to the very mainstream of American poetry, we can assuredly say that the conscience of a nation has been pricked.

Hayden Carruth, Ursula K. Le Guin, Galway Kinnell and Lawrence Ferlinghetti are four American writers who have been in the vanguard of that conscience for decades. With thanks to Sam Hamill and Poets Against the War, we reprint their poems here as living examples of “Poetry and the American Voice.”


Complaint and Petition
Mr. President: On a clear cold
morning I address you from a remote
margin of your dominion in plain-
style Yankee quatrains because

I don’t know your exalted language
of power. I’m thankful for that. This
is a complaint and petition, sent
to you in the long-held right I claim

As a citizen. To recapitulate your
wrong-doings is unnecessary; the topic
is large and prominent and already
occupies the attention of historians

and political scholars, whose findings
will in the near future expose your
incontinent and maniacal ambition
for all to see. Let it suffice to

say that you have warped the law and
flouted the will and wisdom of the
people as no other has before you.
You have behaved precisely as a tin-pot

tyrant in any benighted, inglorious
corner of the earth. And now you are
deviously and corruptly manipulating
events in order to create war.

Let us speak plainly. You wish to
murder millions, as you yourself
have said, to appease your fury. We
oppose such an agenda—we, the people,

artists, artisans, builders, makers,
honest American men and women,
especially the poets, for whom I dare
to speak. We say, desist, resign,

hide yourself in your own shame,
lest otherwise the evil you have
loosed will destroy everything
and love will quit the world.


The Olive Wood Fire
When Fergus woke crying at night.
I would carry him from his crib
to the rocking chair and sit holding him
before the fire of thousand-year-old olive wood.
Sometimes, for reasons I never knew
and he has forgotten, even after his bottle the big tears
would keep on rolling down his big cheeks
—the left cheek always more brilliant than the right—
and we would sit, some nights for hours, rocking
in the light eking itself out of the ancient wood,
and hold each other against the darkness,
his close behind and far away in the future,
mine I imagined all around.
One such time, fallen half-asleep myself,
I thought I heard a scream
—a flier crying out in horror
as he dropped fire on he didn’t know what or whom,
or else a child thus set aflame—
and sat up alert. The olive wood fire
had burned low. In my arms lay Fergus,
fast asleep, left cheek glowing, God.


American Wars
Like the topaz in the toad’s head
the comfort in the terrible histories
was up front, easy to find:
Once upon a time in a kingdom far away.
Even to the dreadful now of news
we listened comforted
by far timezones, languages we didn’t speak,
the wide, forgetful oceans.
Today, no comfort but the jewel courage.
The war is ours, now, here, it is our republic
facing its own betraying terror.
And how we tell the story is forever after.

And the terrorists in Washington
Are drafting all the young men

And no one speaks

And no one speaks