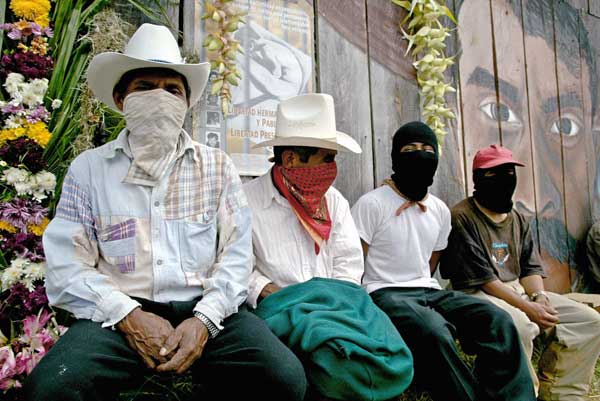 Taking it slow: Members of the Zapatista National Liberation Army (EZLN) rest upon arrival at Oventic, in southern Mexico, in August 2003. (Photo by JORGE UZON/AFP/Getty Images )

Escape From the Dismal Life

Raj Patel’s new book explains the value of nothing, and everything.

‘What the Zapatistas are practicing is slow politics,’ writes Raj Patel. Slow Food and the Zapatistas share ‘the notion that everyone has the right to participate in, and enjoy, the world around them.’

In 1971, the most popular field of study at universities in the United States was education. Social sciences and history came in a fairly close second, with all other fields falling far behind. But by the millennium, those patterns were a distant memory.

Business had become king on campus. It now awards twice as many degrees as any other field. As a corollary development, the famed “dismal science” is also surging. Ask Harvard undergraduates what they are studying, and their most likely answer will be “Econ.”

In this age of bailouts and bonuses, the high priests of finance lord over public policy. As Oscar Wilde said, “Nowadays people know the price of everything and the value of nothing.”

This is the premise of Raj Patel’s new book, The Value of Nothing: How to Reshape Market Society and Redefine Democracy. A writer, academic and former analyst for the Oakland-based Institute for Food and Development Policy, Patel traces the origins of the dominant market-based worldview, examines its negative impact on the planet and finally maps an escape route.

He writes, “The dazzle of free markets has blinded us to other ways of seeing the world.” The remedy, he argues, “is not a democracy run by experts, but the democratization of expertise and resources.”

In his investigation, Patel goes back to the eighteenth century–to the enclosure of the English countryside described in Karl Polanyi’s The Great Transformation–and then moves to the present. Along the way, he shows how thinking that views social relationships as commodities can lead to some very scary places.

In a notorious 1991 memo, Larry Summers, now director of President Obama’s National Economic Council, contended that African countries are “vastly under-polluted”–that “the economic logic behind dumping…toxic waste in the lowest wage country is impeccable.” Using the same kind of reasoning, one can come to the conclusion that the poor are overly possessed of kidneys and should be allowed to sell their organs to the needy rich. Indeed, Patel tells us this argument was actually made by University of Chicago economist Gary Becker, whose neoliberal views have become all-too prevalent in Washington.

The market is not just amoral; it is shortsighted. Patel’s most eye-catching claim is that a Big Mac, commonly sold for under $4, would properly go for $200 if its true costs to society were factored in. This is not an entirely novel concept; Patel cites a study from the Center for Science and the Environment in India, which in turn was the subject of a 1994 Financial Times article. Still, he uses the catchy example to give a skilled explanation of “externalities”–all those societal costs that are not reflected on an item’s price tag.

In the case of the burger, the high cost owes something to the fact that a significant portion of the beef grown worldwide comes from pastures that are clear-cut from ecologically precious forests. Add in that fast food chains often pay workers so little that employees’ “poverty-line wages are supplemented by Medicare, food stamps … and other government services.” Lastly, consider the public-health costs associated with a rising crisis in diabetes and childhood obesity. After we pick up the tab for all these things, that burger no longer looks like such a great deal.

The Value of Nothing does not draw on the kind of weighty archival research that might give a book door-propping heft, and it contains too few reported scenes to qualify as a journalist’s exposé. Rather, at just under 200 pages, Patel’s essayistic narrative is half a critique of the market’s penetration into our collective consciousness and half a showcase of bottom-up social movement responses, with some Malcolm Gladwellian social psychology thrown in. It is left-wing political economy in a contemporary, user-friendly format. T0 the extent that our era of economic crisis cries out for such mainstream repackaging of venerable but too-often-ignored ideas, it is a fine and noble contribution to today’s political debate, if not an altogether groundbreaking one.

Patel is a witty writer, capable of some fun turns of phrase. Yet he too often reaches for tired references. He cites FDR (in a story that is popular but, Patel neglects to mention, probably apocryphal) telling activists “Okay, you’ve convinced me. Now go on out and bring pressure on me!”

One of the more humorous passages in the book is a paragraph about Ayn Rand: “There are two novels that can transform a bookish fourteen-year-old’s life: The Lord of the Rings and Atlas Shrugged. One is a childish daydream that can lead to an emotionally stunted, socially crippled adulthood in which large parts of the day are spent inventing ways to make real life more like a fantasy novel. The other is a book about orcs.” Unfortunately, this quip is by writer John Rogers, circulated on the Internet in the spring of 2009. (When alerted, Patel indicated he was embarassed by his inadvertent error and issued an online apology.)

When he turns to discuss solutions to market madness, Patel effectively and appropriately uses a different joke, one about activists’ penchant for long meetings:

Q: How many Zapatistas does it take to change a light bulb?

A: Come back in two weeks.

So frequently are the masked rebels from southern Mexico lauded by international admirers that one would not expect Patel to come up with fresh insights about them. But he does. All joking aside, he argues that just as environment- and health-conscious eaters are rejecting McDonald’s and opting for ‘Slow Food,’ “What the Zapatistas are practicing is slow politics.” In the autonomous communities under their control, they use village-wide assemblies and rotating governing councils to bring all community members into decisions about local governance. Slow Food and the Zapatistas share “the notion that everyone has the right to participate in, and enjoy, the world around them, and that genuine democracy takes time.”

Of course, this brings to mind another one-liner frequently attributed to Wilde: “The trouble with socialism is that it takes up too many evenings.”

Other than participatory process, what “slow politics” entails remains a bit unclear.Patel approves of the organizing efforts of dissident Chinese workers, Florida campesinos, South African shack-dwellers and free software developers. However, he does not wrestle with the hard questions of whether “small ‘d’ democrats” should engage with political parties, how influential but ossifying labor unions in many countries might still make a difference, or what lessons can be drawn from the interactions between social movements and newly elected progressive governments in South America.

Yet, if sometimes vague, The Value of Nothing makes a forceful case that our reliance on the market to solve public problems must end. After poking numerous holes in pro-business plans for a cap-and-trade system to address global climate change, Patel casually observes, “it seems unwise to use the same tools that have hewn [the trillion-dollar economic meltdown] to solve the most pressing problem facing the planet.”

It is a beautifully understated conclusion. Business majors take note.