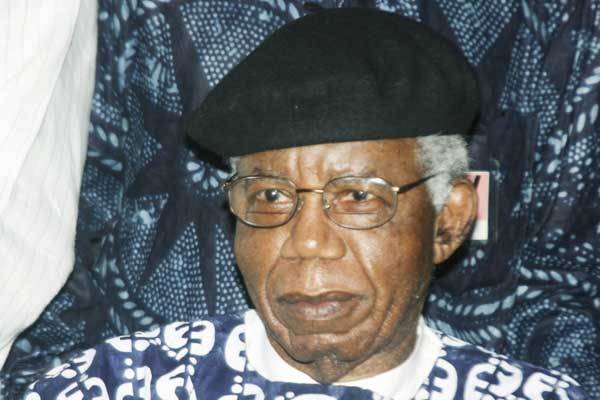 The Oracle of Africa

Chinua Achebe reminds us that his continent’s problems are as old as colonialism.

Nigeria is no longer the butt of jokes, known only for spam mail importuning readers to assist in the recovery of an ill-gotten fortune. Home to one in every six black Africans, Africa’s most populous country is now a trendsetter worthy of serious attention, political analysis–and great puzzlement.

Anglicans in Nigeria now give orders to their American counterparts, who have aligned with them in opposing rights for gay Christians. Unrest in Nigeria’s oil-rich Delta region–where rebels abduct employees of Chevron, the California-based oil multinational–translates into higher gasoline prices for Americans, who consume more than 800,000 barrels of Nigerian crude a day (nearly as much as that provided by Saudi Arabia).

On Christmas Day, Nigeria broke into the consciousness of even the most provincial American when a Muslim from the country’s fundamentalist north tried to blow up a Detroit-bound plane by detonating explosives hidden in his underwear. Umar Farouk Abdul Mutallab, son of a wealthy banker, had visited Yemen, where he allegedly received training, material and instructions from al Qaeda in the Arabian Peninsula.

Suddenly, what happens in Nigeria seems of vital interest to ordinary Americans. Even to experts on Africa, Nigeria is an enigma–an energetic, dynamic country with a great gulf between rich and poor, whose president has been ill for months and is possibly incapacitated in a Saudi hospital. Politically rudderless and socially challenged, Nigeria is spawning something new. But Americans don’t know what it is.

Chinua Achebe gives us some clues as to what is afoot in his native land in a new collection of essays, The Education of a British-Protected Child (Alfred A. Knopf, October). The title refers to Achebe’s own rearing in a land occupied by Britain, where imperial hegemony co-existed with rigid notions of African inferiority and casual racism. “I went to a school modeled on British public [i.e. private] schools,” Achebe writes. The rare beneficiary of a formal education because of his father’s position aiding Anglican missionaries, Achebe’s youth in colonial Africa was one of privilege steeped in English literature. “Africa was an enigma to me,” he writes. “I did not see myself in” such required reading as Treasure Island, Oliver Twist, and Prisoner of Zenda. Even adventure stories he read about Africa, written by Englishmen John Buchan and Rider Haggard, distanced him from his roots and surroundings. Recalling his youth in the 1940s, Achebe writes:

I took sides with the white men against the savages. In other words, I went through my first level of schooling thinking I was of the part of the white man in his hair-raising adventures and narrow escapes. The white man was good and reasonable and smart and courageous. The savages arrayed against him were sinister and stupid, never anything higher than cunning. I hated their guts.

By embracing a different set of role models, notably a favored uncle who rejected both Christianity and the presumed superiority of white colonizers, Achebe transformed his own mentality, becoming the rare artist who can see the best in both the oppressor and the resister. Already 30 years old and a mature novelist at the time of Nigeria’s independence in 1960, in his new essays Achebe dissects Nigeria’s post-colonial predicament while at the same time providing rich insights into the condition of modern sub-Saharan Africa. His book, while slim, also offers subtle insights into the love-hate relationship that many writers from former colonized places have with the culture of their colonizers.

Author of the classic novel about the European invasion of Africa, Things Fall Apart, Achebe lives and works in the United States, but his heart is in Igboland, the southeast portion of Nigeria that his ethnic group considers home. Many Igbo (also known as Ebo) are commercially minded, are the driving forces behind

Nigeria’s prominent movie industry, and are present so widely throughout the world that they are sometimes called “the Jews of Africa.” (Full disclosure: I’m married to an Igbo from Nigeria.)

In his unabashed Igbo pride, Achebe is a rare African artist who openly and whole-heartedly proclaims his ethnic affiliation in defiance of the conventional wisdom that African nations suffer from too many ethnic–read “tribal”–divisions and that the embrace of cosmopolitanism, if not narrow nationalism, requires the condemnation of ethnicity or at least keeping quiet about one’s own “tribe.”

Achebe’s full-throated affection for the Igbo language and culture enables him to avoid a major pitfall of writing and thinking about the continent–an approach that erases differences among Africans themselves in favor of a monolithic concept of African-ness that is believed, perhaps wrongly, to promote political power through presumed racial solidarity. In Things Fall Apart, published in 1958, Achebe recounts the tragedy of an Igbo hero who resists British meddling only to face humiliation and death.

The best-selling novel ever by an African writer, Things Fall Apart looks backward at the brutality and costs of colonialism–and prefigures the tragedy of the first modern ethnic war in Africa, the Igbo secession from Nigeria in 1967. Achebe lived through Africa’s first ethnic civil war and sided with the Igbo, despite holding a high-ranking post in Nigeria’s equivalent of the BBC at the time of the war. Three years later, when millions of his fellow Igbo were dead and Nigeria once more ruled the defeated breakaway province, Achebe left Nigeria to teach in America–for many years he’s been a professor of literature at Bard College–and never returned to Nigeria to live.

Despite his decades in America, Achebe remains alive to the problems, structural and temporal, that bedevil his country of origin. Awash in petro-dollars, Nigeria suffers from huge inequalities, and most people suffer from a lack of electricity, water, education and healthcare. While Achebe blames Nigeria’s leaders–or the lack of good ones–for the country’s troubles, he finds the root of the country’s problems in its colonial past. While Nigeria will celebrate its 50th anniversary as a nation in October, in Achebe’s eyes political independence was and remains a fraud, because of a range of economic, political and social constraints imposed on the country, chiefly by Britain. He writes: “Independence from Britain was virtually a trap and has remained so to this day.”

In labeling independence a sham, Achebe highlights the corrosive effects of competition between the United States and the Soviet Union during the Cold War. Even as newly independent African nations struggle to build democratic institutions and address vast social needs, political elites in Africa, Achebe writes, “would soon be captured by Cold War manipulators and skewed into a deadly season of ostensible ideological conflicts, which encouraged the emergence of all kinds of evil rulers able to count on limitless supplies of military hardware from their overseas patrons, no matter how atrociously they ruled their people.”

Achebe’s emphasis on the failures of decolonization in Africa, while familiar, is a useful reminder that the region’s contemporary problems have historical roots and that aid donors and self-styled saviors of Africa’s poor–such as Bono and Jeffrey Sachs–often ignore these roots in crafting remedies that, implicitly, blame ordinary Africans for their plight.

While Achebe criticizes Western thinkers on Africa, he also sets himself apart from other African intellectuals by his complex stance toward the Christianization of his people. The Igbo are among the most fervent Catholics in Africa, and evangelical Christianity is also strong among them. Achebe’s own father was enlisted by Anglican missionaries to convert other “natives,” and Achebe himself benefited from the schools established by foreigners. Yet he remains alive to the damage done by Christianity and relishes how traditional spiritual beliefs persist among Igbo and other Africans.

The critiques of the colonial and the Christian legacies in Africa come together in Achebe’s powerful indictment against Western do-gooders who, he asserts, demean and diminish Africans in their pursuit of helping them. “Lurid and degrading stereotypes,” he writes, are invoked by aid workers, humanitarians and missionaries in order to drum sympathy for African causes. Yet by “dehumanizing the sufferer,” advocates of assistance for Africa, abetted by international media and Hollywood, promote corrosive stereotypes that drown out authentic African voices.

Achebe insists that the relevance of the African writer partly rests on his or her obligation to rebut persistent stereotypes of African backwardness. The need for alternatives is “the very reason the African writer came into being. His story had been told for him, and he had found the telling quite unsatisfactory.”

Indeed, Achebe is at heart a storyteller, not a policy analyst. While he helps to identify the sources of various pathologies in Nigeria today and in Africa generally, he refrains from presenting cures. “I am not an apologist for Africa’s many failings,” Achebe writes, but he believes these African solutions will be created by and for fellow Africans. In the final essay of this collection, “Africa is People,” Achebe invokes the powerful Bantu declaration, “Umuntu ngumuntu ngabantu.” (“A human is a human because of other humans.”) Africa’s future, Achebe insists, depends on a new appreciation for the value of “an African communal aspiration.”