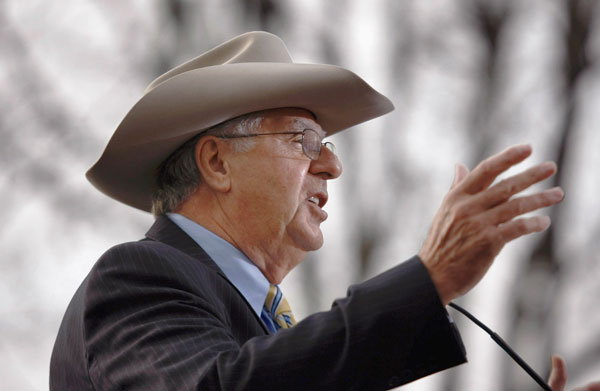 Secrets of the Tea Party

As the Tea Party movement has gained momentum during the last 12 months, it seems few Tea Partiers have caught on to the troubling past of the man at the center of their movement: FreedomWorks chairman, former House Majority Leader and recently-retired lobbyist extraordinaire, Dick Armey.

As chairman of FreedomWorks, the group credited with mobilizing the Tea Party movement, Armey is the movement’s de facto leader. Yet Armey’s years spent lobbying for a group recognized by the State Department as being a terrorist organization should give Tea Partiers pause.

In the weeks before April 15, 2009, local newspapers began reporting that groups calling themselves TEA, or Taxed Enough Already, were planning rallies to protest wasteful government spending. By the time Tax Day rolled around, over 300 protests were under way in all 50 states. More than 100,000 people took to the streets, gathered in parks and city centers with signs, slogans and costumes evoking America’s revolutionary past.

The protests have continued. On Sept. 12, 2009, Tea Partiers marched on Washington, D.C. From a podium at the base the Capitol Building, Armey addressed the crowd with his wife Susan by his side. They were standing there together, he said, for the future of their grandchildren.

When the first rounds of stimulus didn’t work, what’d they do? The same thing the government always tries to do with a bad idea: If it doesn’t work, do more. … I want to make one clear idea: Not too long ago, President Barack Obama stood right there on that stage. He said the one singular pledge of commitment that we ask of every elected official in America at every level. He pledged a commitment of fidelity to the United States Constitution.

At which point the crowd burst into the collective chant: “You lie! You lie! You lie,” echoing Rep. Joe Wilson’s (R-S.C.) outburst during Obama’s address to Congress three days earlier.

The man behind the movement

Only one month before that populist moment on Capitol Hill, Armey was employed as a lobbyist by leading international “consulting firm” DLA Piper. In that capacity, from 2005 to 2009, Armey promoted the People’s Mojahedin Organization of Iran, otherwise known as Mujahedeen-e-Khalq (MEK), which the State Department has branded a terrorist group. Armey lobbied his former colleagues on behalf of legislation that would have provided taxpayer support to the MEK.

Armey’s work as a lobbyist–during which time he also served as chairman of FreedomWorks and organized Tea Party protests–is not mentioned in his FreedomWorks biography. This omission can perhaps be explained by the anti-lobbyist sentiments held by so many Tea Partiers. At the first national Tea Party Convention held in Nashville in February, former Alaskan Governor Sarah Palin spouted off on the Obama administration’s failure to eliminate lobbyists and cronyism in D.C. during her keynote speech and the crowd burst into loud applause.

As a lobbyist, Armey has not let his stated ideology stand in the way of his paycheck. In 2008, as corporations and banks across the nation were being bailed out with billions of tax dollars, Armey was lobbying on provisions of the TARP Reform and Accountability Act of 2009 for CarMax, a Fortune 500 company that went on to issue $1.5 billion in asset-backed securities eligible for investor loans under the TARP and Federal Reserve-subsidized Term Asset-Backed Securities Loan Facility (TALF).

However, the most interesting set of clients Armey represented during his career as a lobbyist were two Iranian-American businessmen: Akbar Nikooie and Saied Ghaemi.

From 2005 to 2008, Ghaemi paid out $910,000 to DLA Piper for the service of Armey, his former staffer Jean Campbell, and a handful of other lobbyists to bring issues relating to Iranian “foreign relations” and “human rights” to the attention of Congress, the Department of Defense, the State Department, the White House, the National Security Council and the Department of the Treasury.

2007 was a banner year for Armey’s work on U.S./Iran relations. Ghaemi shelled out $400,000 for Armey and his team of Capitol Hill lobbyists. There were two bills before Congress that year that would have had a profound effect on U.S.-Iran foreign policy and could have potentially benefited a group of exiled Iranians greatly–namely MEK. Armey, during his time as Ghaemi’s voice on the Hill, became the outspoken proponent of MEK, repeatedly urging Secretary of State Condoleeza Rice to remove the group’s terrorist designation.

In a 2007 article written by Armey in The Hill, he said the Bush administration would be wise to utilize MEK, which is violently opposed to the current Islamic regime. “Supporting the democratic opposition holds great promise for promoting the cause of freedom and democracy in Iran, particularly the group feared most by the regime (MEK),” wrote Armey, who concluded by saying “the enemy of my enemy is my friend.” This statement had never before been so true.

According to the State Department, MEK, a group that blends Marxist and Islamist tenets, was founded for the purpose of overthrowing the U.S.-backed Shah of Iran. In 1975 and 1976, MEK allegedly killed seven American defense advisors to the Shah.

MEK’s initial purpose was realized in 1979 when the group, along with followers of Ayatollah Khomeini, successfully staged the Islamic revolution, seizing the Tehran U.S. Embassy and sending the Shah into exile. Following the revolution, MEK was sent into exile by the Islamic Republic of Iran. Over the following two decades MEK allied itself with Saddam Hussein to undermine the Islamic government of Iran. During the onset of the Iraq War in 2003, U.S. troops captured and detained 4,000 MEK soldiers near the Iran/Iraq border.

One of the bills Armey was lobbying for in 2007 would have directed the State Department to place the Quds Force of Iran’s Revolutionary Guard Corps (IRGC) on its list of foreign terrorist organizations, because the IRGC was involved in both surveillance and combat against U.S. forces in Iraq. The bill (HR 1324) quoted an article published in Sobh-e Sadeq, an Iranian state-run publication produced for the IRGC, that advocated the capture of “blue-eyed blonde soldiers, who would become grain to be fed to hungry gamecocks that are waiting for our signal.” In effect, the bill would have in effect justified U.S. military action against Iran.

The second bill, the Iran Human Rights Act of 2007, asked Congress to “hold the current regime in Iran accountable for its human rights record and to support a transition to democracy in Iran.”

One of the bill’s several provisions, custom tailored for MEK, called for an amendment to the Iran Freedom Support Act of 2006 that would have endorsed U.S. support for groups dedicated to overthrowing the Ahmadinejad regime, both within (as the law then provided for), as well as outside Iran (as in the case of MEK).

Critics note that the proposed legislation was strikingly similar to the Clinton administration’s use of the Iraq Liberation Act to employ and fund the Iraq National Congress and its less-than-reputable leader, Ahmed Chalabi, in a failed attempt to overthrow Saddam Hussein’s regime.

Despite the fact that neither bill passed in the 110th Congress (though the State Department did designate the IRGC as a foreign sponsor of terror in October, 2007), Ghaemi continued to employ Armey until July 2008. After that, Armey did not drop the banner; that same month Nikooie began to patronize DLA Piper and Armey lobbying on issues of “Iranian human rights.” To date, Nikooie has paid the firm $210,000.

Neither Ghaemi nor Nikooie could be reached for comment.

Armey hasn’t been alone in his support of MEK. Rep. Tom Tancredo (R-Colo.) led a concerted effort during the Bush administration to have the State Department remove MEK from its list of terrorist organizations.

Ironically, given his support of a socialist group, Tancredo delivered an acerbic opening address at the National Tea Party Convention. “People who could not even spell the word ‘vote,’ or say it in English, put a committed socialist ideologue in the White House,” he said. “His name is Barack Hussein Obama.”

“Around the world people seeking freedom from oppressive regimes wonder if Alaska [sic] is still that beacon of hope for their cause,” Palin said. “The administration has cut support for democracy programs, and where the president has not been clear, I ask: Where is his strong voice of support for the Iranians who are risking all in their opposition to Ahmadinejad?”