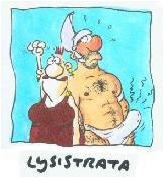 BY Ben Winters
Share TweetReddit0 EmailPrint
On March 3, a New York actor named Sharon Bower was at the forefront of an international movement. On that day, nearly 1,100 performances were held, all over the world and in every U.S. state, of the Aristophanes play Lysistrata, as an international protest against war. There were performances in Minnesota and in Karachi, across from the White House and outside Westminster Abbey. In Brooklyn, Kevin Bacon and Kyra Sedgwick took part; in Los Angeles, Alfre Woodard and Eric Stoltz.

First staged in 411 B.C., the comedy (like at least three of Aristophanes’ other works) was written to protest the Peloponnesian War, which at that point had been going on for 21 years. The play was witty and trenchant, regarded in its time as now as a masterpiece. In Lysistrata, the women of Athens are fed up with endless war, and decide to withhold their sexual favors until the men of Athens sue for peace.

Aristophanes’ script drips with innuendo and crudeness; no other giant of world literature had such a sure hand with an erection joke. Scholars today call Aristophanes’ work “Old Comedy,” but the situations of Lysistrata are those you might expect from a contemporary frathouse comedy: Athenian Pie, perhaps.

The creators of the Lysistrata Project knew this full well when they decided to organize a protest around it. “This play is very funny, and it’s very sexy,” Bower says, “and sex sells.”

It wasn’t just the smut that appealed, of course. “The reason this play works for this purpose is that it’s about a group of people who feel disempowered in their current society, and yet they have this need to make a change, to stop a war,” Bower says. “So they have to get resourceful and creative in order to do that. … I think so many people want to do the same thing right now.”

Lysistrata was produced at the American Repertory Theatre in Boston last spring, though translator (and then ART artistic director) Robert Brustein avoided fully embracing its pacifist message. Aristophanes, he said in an interview, “was implying that war by its very nature was an unacceptable thing. After September 11, I don’t think many of us believe that any more.” So Brustein’s version considered the message to be that only “civil conflicts—those between blood kin” are what is being resisted.

Which points up part of the challenge of political theater. An author with an opinion to express will find his message interpreted by a director, and then by an actor, and then by critics and an audience. The Lysistrata Project was striking because it resisted this mutability. The message of the participants was unambiguous: No to war.

The whole project started with Bower and her friend Kathryn Blume, who called on January 4 to say, “Hey, I’m thinking of doing a reading. Do you want to be in it?”

Two days after the worldwide reading, Bower was back at work, doing a day’s worth of shooting on a Law & Order episode. Surely this was a bit of a let down, to return to the picayune life of the working actor after bringing a moment of drama—in every sense of the word—to the world stage. “I don’t feel let down yet,” Bower reports, “But I will. Right now I’m just so tired.”

Bower and Blume have earned their rest. In two months of preparation, The Lysistrata Project gleaned not only an impressive breadth of participation, but copious and generally positive mainstream news coverage—not to mention the money each individual production raised for progressive causes like the Education for Peace in Iraq Center.

And there were, Bower notes, certain tertiary benefits to the process. “I think we gave a lot of people hope,” she says. “And I think many, many people became activists for the first time with this, and I don’t think they’ll return to being silent.”

Yet Bower still does not count the Lysistrata Project a success: “We might still be going to war.” Theater of protest has always had a difficult road–one example is Lysistrata itself. The Peloponnesian War, after all, lasted another seven years.

Ben Winters is a journalist, arts critic, and playwright living in Brooklyn.