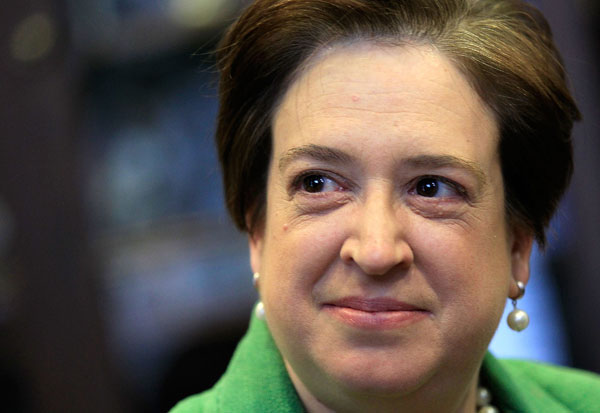 Whether or not Elena Kagan is a lesbian shouldn’t distract us from a simple fact: America isn’t ready for an openly gay Supreme Court judge.

For Sullivan and AFTAH, the rumor was an opening to expand the fight for (or against) gay rights into uncharted and influential territory: the Supreme Court nomination process.

Two hours after President Barack Obama’s May 10 announcement that Solicitor General Elena Kagan was his nominee to replace U.S. Supreme Court Justice John Paul Stevens, journalist Andrew Sullivan asked a question on his popular blog the Daily Dish: “So is she gay?”

At almost the exact same moment, Christian Newswire posted an urgent press release from “Americans For Truth About Homosexuality” (AFTAH) titled: “If Elena Kagan Is a Lesbian, She Should Say So because Public Has a Right to Know.” The organization demanded that Kagan–who is single and has never married–answer a question familiar to students of the McCarthy era: “Are you now or have you ever been a homosexual?”

The fact that Sullivan, who is gay and has been arguing forcefully for state recognition of same-sex marriage since the early 1990s, had become sudden bedfellows with AFTAH, which is “devoted exclusively to exposing and countering the homosexual activist agenda,” was surreal enough. But things got weirder the next day, when Politico published the story “Elena Kagan’s friends: She’s not gay.” One of those friends, former New York Governor Eliot Spitzer, tried to put the lesbian rumor to bed: “I did not go out with her [at Princeton], but other guys did,” he said in an e-mail to Politico. “I don’t think it is my place to say more.”

But many reporters, editors and pundits did think it was their place to say more–on cable news, radio talk shows and in print–about a “story” apparently too juicy to ignore, especially after the Wall Street Journal ran a front-page photo of Kagan playing softball. (We all know what sort of women play softball and oppose the military’s “Don’t Ask, Don’t Tell” policy, right?) The feeding frenzy continued throughout the week, despite a White House official’s unequivocal statement weeks earlier that Kagan is not gay. (Kagan herself has never said she is gay, or not.) That comment was triggered by a CBS News blog post by a former Bush administration aide asserting (without sources) that Kagan would be the “first openly gay justice,” and that “her female partner is rather well known in Harvard circles.”

On his May 13 show, Comedy Central’s Stephen Colbert joked that the saga revealed Rupert Murdoch’s ability to manufacture “news” within his U.S. multi-media empire, which includes the Wall Street Journal, New York Post and Fox News.

The viral spread of the unsubstantiated Kagan-lesbian rumor was pack punditry and lousy journalism–not one story offered a named source saying Kagan is gay–but it wasn’t a right-wing smear job meant to trip up Kagan’s confirmation. For Sullivan and AFTAH, the rumor was an opening to expand the fight for (or against) gay rights into uncharted and influential territory: the Supreme Court nomination process. Given the crucial role the Court will likely soon play in deciding whether states can ban same-sex marriage, full disclosure of Kagan’s orientation as Sullivan put it, is relevant and would be a good thing.

But would it? Or would it trample on Kagan’s right to privacy, create a new sexuality litmus test for nominees, and bring identity politics into an institution built on the idea of nonpartisan, dispassionate justice? Imagine the confirmation hearing as Senate Judiciary Committee Chairman Patrick Leahy (D-Vt., pro-gay marriage), or Ranking Member Jeff Sessions (R-Ala., anti-gay marriage), asks Kagan if she is gay–for exactly opposite reasons.

If you cringe imagining the scene, you’re apparently not alone. The Senate committee did not ask the question–or any other pertaining to gay rights issues–in its bipartisan written questionnaire sent to Kagan in May, and no Washington politician from either party has said it should be asked during the hearing, which begins on June 28.

Some gay activists believe that is for the best. “I understand that call for people of privilege and power to be forthright about who they are,” says Joe Wilson, whose documentary Out in the Silence exposes the reality of homophobia in rural America. “But the anger shouldn’t be directed solely at the individual.” Forced public outings damage people, Wilson says.

Few except AFTAH and Sullivan have demanded a clear answer from Kagan about her sexuality, and argued that her privacy interests are trumped by the public’s right to better understand how she might rule on gay rights issues. A Newsweek columnist dismissed the whole topic as inappropriate and immaterial–and then opined that “we need more diversity on the court,” so how about a mother?

Undoubtedly, the Supreme Court is more diverse than ever–Kagan would replace the only Protestant left on the court, and be the third woman and Jew currently sitting on the bench. Sonia Sotomayer became the first Latina judge last year after President Obama said he wanted a justice with “empathy” for those facing discrimination.

All this points to the current strange parameters of diversity vis-a-vis the Supreme Court. We talk openly about, even celebrate, gender, religious and ethnic diversity on the court–just as Newsweek did, in a story titled “Twilight of the WASPs”–yet mostly whisper about a nominee’s sexuality, a topic that remains officially out of bounds in Washington and most media.

Apparently, the media is happy to fill broadcast time and column inches with a titillating rumor, as long as it can discard it after a few news cycles and avoid answering a more important and less invasive question than Sullivan’s: When will Congress confirm an openly gay Supreme Court nominee?