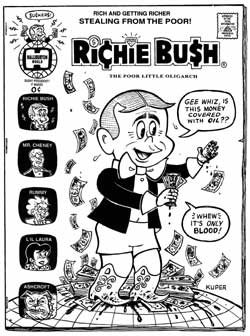 BY Paul Buhle
Share TweetReddit0 EmailPrint
The startling cinematic success of American Splendor—an indie film uniquely merging the real-story-behind-the-film-story with the comic drawings that stand between the two—has kicked the familiar dilemma of the vernacular American artist up to new levels.

Over most of the planet, adults as well as children love comics, read them throughout life, and regard a considerable dimension of the output as “Art.” Not in the United States, at least not until Art Spiegelman’s MAUS and the author’s Pulitzer Prize (Ben Katchor’s MacArthur award added fuel to the fire). The publishing industry has only belatedly developed commercial interest in what has come to be called the “graphic story” (not quite as misleading as “comic,” to describe non-humorous material). And here comes World War 3 Illustrated, a political-artistic wallop at the System.

Actually, the WW3 project has been around for 20 years, annual volumes more or less self-published by a collection of youngish artists, anthologized occasionally (as Confrontational Comics by Four Walls, Eight Windows in 1995). But the political situation and the growing sense that a new art is aborning has turned a corner. World War 3 Illustrated: Taking Liberties, just off the press, has Spiegelman inside the front cover, Sue Coe close at hand, Tom Tomorrow delivering his usual jabs, and more than a dozen others, young and middle aged, including co-founder Peter Kuper (who draws the “Spy vs Spy” for the current Mad Magazine, and whose “Richie Bush,” a splendid takeoff on Richie Rich, is one of the hard-hitting highlights).

What we have here, in historical terms, is a recuperation of the 1910s Masses magazine’s Ash Can artists interacting with another war threat (the approach of the World War I, during which the magazine was suppressed) and a social promise (something of Greenwich Village and the Industrial Workers of the World). Offering a wide variety of artistic approaches, WW3 artists offer realistically and surrealistically enticing views of the horrors in front of us, the struggles to turn things around—and how stupid our leaders really look.