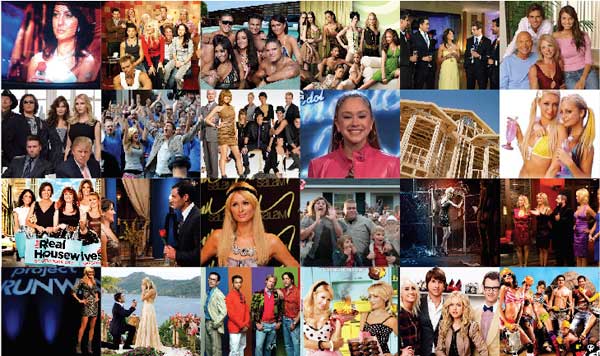 Class anxiety, hyperconsumption and mocking the poor, for your viewing pleasure.

Potential stepmoms were welcomed to the California estate where they’d be living while dating divorcee Don Mueller on NBC’s Who Wants To Marry My Dad? “This is our house,” said Mueller’s son Chris. Except it wasn’t.

Neither was the six-car garage or the $165,000 Ferarri Don drove on the show. Despite the entry sign that read “The Muellers” and the family photos on the walls, Don’s family lives in a lovely, but hardly-palatial, Cincinnati house. The same bait-and-switch mansions and hot tubs were used on Meet My Folks.

Reality TV producers relocate “the folks” on such shows from their own modest homes to erase anything so banal as a middle- or working-class existence because integrated marketers prefer upscale homes as the sets where their products will be showcased. Reality TV coaches us to lust after the exorbitant lifestyles of trust fund brats on MTV’s Paris Hilton’s My New BFF, trophy wives on Bravo’s Real Housewives franchise and wealthy bachelors on The Millionaire Matchmaker. Watching the bad behavior of heiresses, Housewives, and bad-toupee-wearing moguls plays on Americans’ twin desires to hate the rich for having what most of us don’t–and to be them.

From Fox’s The Simple Life to wedding-industrial complex series such as WeTV’s Platinum Weddings, reality TV has skewed our economic realities, overemphasizing the short-term pleasures of “having nice things” while hiding the long-term economic consequences of our nation’s overconsumption. “I don’t understand saving for the rainy day,” celebrity stylist Rachel Zoe said earnestly on The Rachel Zoe Project. Never mind that Americans are drowning in debt–we need couture. “Live like it’s your last day, every day!” she urged.

By the end of 2009, while 34 million of us received food stamps, Bravo rolled out NYC Prep, profiling rich kids in “the top 1 percent” of the “elite.” As crippling healthcare costs continue to force hundreds of thousands into bankruptcy every year, E!’s Dr. 90210 is always on call to provide costly cosmetic surgeries to wealthy women with body image issues. And just as millions were facing foreclosure, Bravo invited us to root for massive profits for real-estate speculators on Million Dollar Listing. Of course, there’s no acknowledgment that our protagonists here come from the same industry that gave us the collapse of the housing market.

On reality TV, low-income women’s struggles to feed, clothe, shelter, and educate themselves and their kids become fodder for mockery. Broke, busty babes beg for a photo shoot on America’s Next Top Model, proclaiming that posing nearly nude is their “only chance” at a better life. American Idol taunts young, poor single moms, often African-American and Latina, who say they just know that Idol will be their stepping-stone out of wage-slave jobs at McDonald’s. After their ear-splitting auditions and humiliation from the judges, cameras follow these pitch-poor rejectees as they head home, cursing and crying about their dashed dreams, dragging sad toddlers behind them. Meanwhile, host Ryan Seacrest takes snarky swipes at their pathetic pipes. Thought you could escape poverty through song? Hilarious!

Disturbing, yes, but not surprising for a genre that allows advertisers to collaborate with producers to craft content. One of the myths surrounding reality TV is that it exists because the public demands it, via astronomical ratings. This is false. Reality TV is created to meet advertisers’ needs. Megahits like American Idol undeniably draw boffo numbers. But unscripted series (for example, The Pickup Artist, in which awkward guys are coached how to erode women’s self-esteem to manipulate them for sex) are allowed to languish on the primetime dial despite terrible ratings–because they are cheap to produce, and can draw hundreds of thousands of product placement dollars before the networks ever sell a single commercial. In exchange for that investment, these shows aim to convince us that sponsors’ products are intrinsic to our survival, whether it’s a Target tent sheltering Survivor contestants from the elements or Sears giving new homes to natural disaster victims on Extreme Makeover: Home Edition.

Reality TV encourages us to lust after things we might have never wanted or needed. During an episode of What Not To Wear, TLC gave a record industry staffer $50,000 for a “dream wardrobe.” Turns out 50 grand doesn’t go very far at Armani and Gucci: her “fashion intervention” netted just two small suitcases of clothes and accessories.

“Need” isn’t the issue. Improving people’s lives can be a happy side effect on some shows, as when Extreme Makeover built flood-damaged homes for Hurricane Katrina survivors, or when What Not to Wear gives single moms new wardrobes to help them dress for the job they want. But altruism is these shows’ feel-good tactic, not their purpose. The presentation of these gifts is about plugging the brand, and cultivating the idea that luxuries are the secret to happiness.

Extreme Makeover families weep with joy at the end of every episode, shielding viewers from problematic follow-ups: Exorbitant property taxes, building code violations and legal issues that lead to headlines such as, “With ‘Extreme Makeover’ Homes, Some Get Foreclosure Instead of Happy Ending.” The big reveal at the conclusion of What Not to Wear is as much ideological as visual. Made-over women’s former protestations about frugality, comfort, and nontraditional gender presentation vanish. By the end of the show, one stiletto-clad foot after another, these Stepford Shoppers march to the same consumerist beat, raving about their newfound “shopping bug.”

Give them a piece of cake

At the opposite end of the reality TV spectrum, “do-gooder” programs promise to explore solutions to poverty–yet reinforce the flawed notion that America needs charity, not social change. On ABC’s Oprah’s Big Give, well-intentioned participants give $2,000 worth of flowers to passersby on the street, pay off medical bills for the uninsured, and donate supplies to under-resourced schools. Viewers get warm fuzzies, but nothing is fundamentally improved. On Fox’s The Secret Millionaire the uber-rich are dropped into “the hood,” given a week’s worth of welfare wages, and go “undercover” at soup kitchens and battered women’s shelters. They learn a lesson eight-year-olds understand: sometimes bad things happen to good people. Then they write a few well-placed checks, and, *poof*–everything’s all better. And each episode of CBS’s post-recession Undercover Boss is a full-length commercial for corporations such as Hooters and Waste Management, Inc. packaged as a populist fantasy: Greedy CEOs pose as workers, observe mistreatment and labor abuses, have emotional awakenings, then promise their employees that things will be different from now on.

As we know, corporate officers’ feelings don’t result in workplace policy shifts–union organizing does. It’s lovely when companies donate books to needy kids, but that can’t replace national investment in education. Yet reality TV represents the national scourges of poverty, failing schools, homelessness and workplace injustice as individual misfortunes, not institutional problems requiring policy solutions. The truth is, the world will not be a better place if only more of us would give flowers to strangers.

Reality TV’s mockery of the poor and elevation of the branded superrich has coincided with an increasing dearth of opportunity in the United States. Add to that the genre’s glorification of spending for spending’s sake, and the result is a strain of pop culture that contributes to a superficial mindset and a misrepresentation of public life that does not serve America, or its people, well.

This essay is adapted from Reality Bites Back: The Troubling Truth About Guilty Pleasure TV (Seal Press). For media literacy resources, see www.RealityBitesBackBook.com.