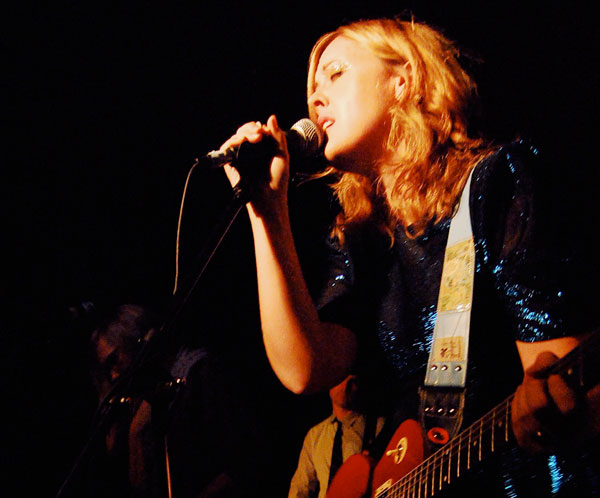 The End of Indie?

The difference between “mainstream” and “indie” music has almost disappeared.

Today, no simple narrative of development or decline can capture the shifting complexity of music in the digital age.

Under the banner of the 2010 CMJ Music Marathon, the annual New York City music festival, an October 20 Madison Square Garden concert featured two bands that dissolve the distinction between “indie” and “mainstream.” French rock band Phoenix, the headlining act, records on major labels (EMI and Universal) and has won a Grammy. The Dirty Projectors, the opener, records on an independent label (Domino Records) and sounds more at home in a theater or art gallery than a sports arena.

The prominent pairing hints at deep changes in the music industry since the festival, which showcases new music from independent labels and unsigned artists, began 30 years ago. Corporate labels have collapsed under the weight of digital piracy and peer-to-peer file sharing (CD sales have fallen by 50 percent since 2000); emerging musicians now calculate their online buzz with sophisticated Web analytics; bands on independent labels reach Top 40 status; and governments sponsor pop music concerts as celebrations of national identity. Which all raises the question: What does the word “indie” mean today?

The digital revolution has caused the mostly Anglo-American music calling itself “indie” since the early 1980s to change at an accelerating pace over the past decade in several interrelated ways. Because it is easier than ever before to record and distribute music cheaply or for free, the sheer number of “independent” artists producing popular music has skyrocketed. On the listening side, the Internet has made almost any recording instantly accessible, along with huge quantities of information about artists, genres and labels. This implies profound shifts for a subculture founded upon record collectors’ encyclopedic knowledge of pop and rock history as well as up-to-the-minute connoisseurship.

Those of us avid listeners who came of age in the 1990s and earlier remember how much effort it took to learn about obscure bands and track down their recordings. Today, a panoply of automated services recommend new artists and upcoming shows based on your personal taste preferences. These developments have brought about a paradox: “indie music” still thrives on elitist hipster sensibilities, yet at the same time the actual music is more democratically available than ever.

At this year’s CMJ (College Music Journal) Marathon–four days of industry panels, parties and performances by more than 1,200 artists in over 75 venues–it was clear how the do-it-yourself drive of basement shows, four-track recordings and Xeroxed zines of the ’80s and ’90s has morphed into the digital entrepreneurship of social networking, Pro Tools plug-ins and influential blogs. As accessible technology ups the ante of professionalism, making intentionally sloppy or amateurish performance, recording and marketing less common, the nature and impact of “indie” music has changed.

While any label that is not one of the four majors (Universal, Sony, Warner and EMI) or their subsidiaries is still considered independent by CMJ, which tracks college radio station playlists, it’s not at all clear many listeners actually notice the distinction. The factors that allow a new band to reach large audiences have shifted in recent years, though talent, hard work, connections and luck remain crucial. As sales of recorded music have declined, the profitability of live performances has risen with increasing ticket sales, ticket prices, and numbers of bands on tour. The result? Emerging bands must demonstrate a relentless commitment to touring (and attracting fans to shows via social networking sites) in order to capture the attention of a respected indie label.

The digital dissemination of audio and information has also made independent music easily accessible worldwide. Young musicians in many parts of the Global South now create “indie” rock inspired by the same American and European influences as the Brooklyn bands filling Marathon shows with Facebook friends.

It is easy to wax celebratory about the potential of technology to democratize music production, or nostalgic about the days when songs you liked would never, ever appear in car commercials. But today, no simple narrative of development or decline can capture the shifting complexity of music in the digital age. For every corporate sponsor at the Marathon, there were dozens of hard-working young local bands, as well as a few current projects from luminaries of earlier periods of indie rock history like Dean Wareham (formerly of Luna and Galaxie 500, now with Dean and Britta) and Corin Tucker (of Sleater-Kinney).

But ultimately, as marketing guru Kevin Wortis of Rock Steady Music said during one Marathon panel: “None of us knows why some records succeed and others don’t. We have no clue.”