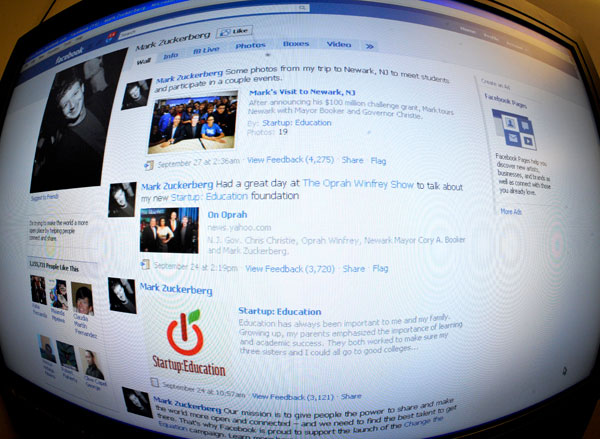 Beware this beguiling distraction--and the spume of accolades surrounding the film it inspired. (Photo by: KAREN BLEIER/AFP/Getty Images)

Friend Your Day Away: The Anti-Social Network

David Fincher’s film The Social Network is on its way to taking virtually every Best Film prize available to American movies, from the National Board of Review, to critics’ circles across the country to a Best Picture Oscar. Leaving aside the dubious honor an Academy Award becomes with just a little perspective (consider how much fun you’d have settling down tonight to revisit recent Oscar winners like Crash, Chicago, A Beautiful Mind), the spume of praise and accolades arising around the Fincher’s new film is remarkable. Hailed by Rolling Stone’s Peter Travers as “an American landmark!”, The Social Network is thought to be The Film with Its Finger on the Pulse, as it were, which is, in some ways, unarguably true, but in other ways as useless and empty as the acceptance of a “friending” by a total stranger.

The narrative of the film is, in outline, drab and inconsequential: college squabbles, modest programming achievements, money, betrayals, lawsuits. If the entity at the center of the cyclone weren’t Facebook, it would barely justify a TV drama’s single episode, regardless of how many thorny zingers Aaron Sorkin stuffed into his screenplay. But it is. And how familiar we all are with Facebook by now is the film’s raison d’être–its extra-cinematic fuel.

The boilerplate cant regarding Facebook in the media posits the site as having changed our lives. But has it? How is your life significantly different due to Mark Zuckerberg’s contraption? Is it more than a monstrous distraction? You should clock yourself on an average day, and see how many minutes you waste futzing with Zuckerberg’s masterpiece. If you aggregated the time expended in the last three years between FarmVille (reportedly, 1% of the world’s population plays it) and the strained efforts by millions to post witty status updates every day, you would have enough man-hours to build a small nation’s economy.

Facebook’s stupendous popularity seems to suggest a pervasive and alarming need for even the tritest “connection” in a world many times less socialized, connected and communal than the one in which our parents and grandparents grew up. But ubiquity itself is not much of a significator, particularly when the product at hand is completely free. Imagine the exodus of attention Facebook would suffer if Zuckerberg decided to charge $1 for its use.

But the site’s mechanics are more complicated than that in social terms. More than a time-suck, Facebook has the express intention to propagate social adhesion (something the movie’s Zuckerberg ironically lacks any capacity for). Yet instead it erects an artificial public simulacra of human contact. Since you’ve used it, you know that its potential for alleviating genuine loneliness, fostering a real sense of community and retaining bygone friendships is minimal and possibly even counteractive. In the medium run, Facebook may well depress the emotional engagement and opportunities needed for live relationships, and foster the social atomization it purports to remedy. Substituting for the real thing may well be part of the Facebook business plan by now–the real Mark Zuckerberg would surely be chagrined if his 500 million customers were to suddenly defect in favor of real meetings, real conversations, real intercourse. If Facebook is the future, it’s dystopian. It’s built around a voluntary form of social control that would’ve astonished George Orwell.

As an October 2010 New Yorker article by Malcolm Gladwell made plain, Facebook isn’t even useful as an activism engine, as has been so widely claimed. Its “connectivities” are too thin, too ephemeral, too much like advertising. Our rationales about expending our time on it, day to day, run parallel to the filmmakers behind The Social Network, which storms along as if every tiny step toward the creation of the site is like the drafting of articles for the Constitution or discovering the cure for polio.

Needless to say, it all needs to be taken down a peg or two. Indeed, David Fincher’s movie could have saved itself from true irrelevance if it had been pitched as a full-on satire. A bitter, Waughian stance toward not just Zuckerberg’s mild megalomania, but toward the entire weird, non-social “social” phenomenon he created, would have been a sweet calling-out of the emperor’s nakedness. As it is, the movie is a zesty advertisement for the further meaningless Facebookization of our daily routines, and the further squandering of our free time. I suspect that the nebulous rewards of Facebook, far from representing the future, will seem hardly worth the trouble and time inside of five years, at which point some other online concoction-fad will doubtlessly beguile us. Then, Fincher’s movie will be as dated as a ’60s musical. For now, of course, I’m on Facebook and often wish I weren’t. Go ahead and friend me. It’s a fart in the wind.