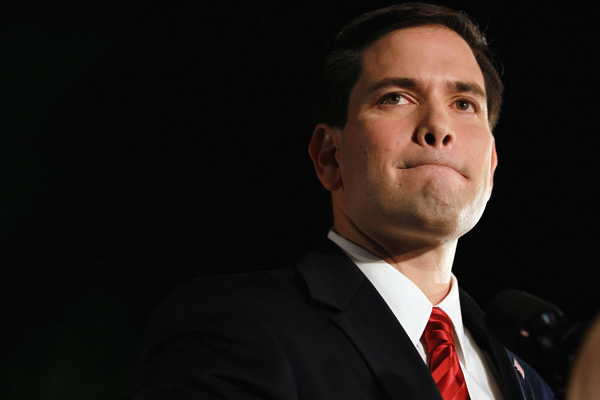 As the FBI investigates $120 million in subsidies for a new private prison in Florida, the new U.S. senator could end up in the hot seat over close ties to prison operator Geo Group.

investigations into members of the Florida Republican Party, as well into party donors, have resulted in multiple indictments.

This article is excerpted from a longer investigation, the full text of which is available at Beau Hodai's website, DBA Press.

On January 5, newly elected U.S. Senator Marco Rubio (R-Fla.) was sworn into office in Washington D.C. But the former speaker of the Florida House of Representatives has some unfinished business back home.

Rubio–as well as other state GOP lawmakers and party contributors–are currently the likely subjects of multiple wide-ranging state and federal investigations conducted by the FBI and the Florida Department of Law Enforcement (FDLE) into improper use of credit cards issued by the Republican Party of Florida, as well as tax evasion and improper budgetary appropriations.

Some of the legislative actions reportedly being investigated by federal authorities are those that led to the development of the state’s largest private prison, the Blackwater River Correctional Facility (CF), which opened its gates for operation in November 2010. The prison was designed and is operated by Florida-based Geo Group, the nation’s second-largest private prison operator.

To date, investigations into members of the Florida Republican Party, as well into party donors, have resulted in multiple indictments. On November 2, 2010- election day–federal investigators subpoenaed the party’s financial records.

Perhaps the most notable individual charged to date is former Rep. Ray Sansom (R-Destin), who while serving as Rubio’s budget chief inserted language into the Florida’s 2008-2009 budget for what was to become Blackwater CF.

While Sansom has not yet been indicted or officially charged with any wrongdoing in relation to Blackwater prison’s development, in February 2010, while serving as successor to Speaker Rubio, he resigned amid criminal and ethics investigations. Sansom allegedly falsified the 2007-2008 budget by inserting a $6 million appropriation for the construction of an aircraft hangar for Jay Odom, a Destin businessman and prominent Florida Republican Party contributor.

Indicted on charges of lying to a grand jury, official misconduct, grand theft and conspiracy in relation to the Odom case, Sansom is currently awaiting trial.

On March 30, 2010, Elva McCaig, a nurse employed at the Florida Department of Corrections’ (FDOC) Santa Rosa Correctional Institute, and treasurer of Nurses Behind the Gate, a prison nurse advocacy group, wrote a letter addressed to U.S. Attorney for the Northern District of Florida Thomas Kirwin and State Attorney for Florida’s Second Judicial District Willie Meggs.

The letter laid out McCaig’s concerns that the development of Blackwater CF was yet another legislatively-mandated handout to yet another prominent Florida Republican Party contributor, Geo Group. Geo consistently reports annual revenue in excess of one billion dollars–all of which it earns through state, county and federal contracts for the detention of both criminal offenders and immigrant detainees.

Geo’s PAC spending, however, is not the limit of their appreciation shown to Rubio.

On September 13, 2010, several top Geo corporate executives, along with Geo lobbyists and subcontractors, gave a total of $33,500 in individual contributions to the Florida Victory Committee, a PAC created for the benefit of three other PACS: Marco Rubio for U.S. Senate, the National Republican Senatorial Committee and the Republican Party of Florida. In addition, Geo Chief Executive Officer and founder George Zoley gave Rubio a further $4,800 in personal contributions over the course of 2009 and 2010–half of which Zoley gave to the Rubio campaign on September 13, 2010–putting his own personal disbursements to the Rubio campaign for that single day at $7,400.

McCaig’s letter apparently contained enough salient information that it sparked the interest of federal investigators. According to multiple sources in the area, during the summer of 2010 federal investigators began making house calls in Santa Rosa County (home of Blackwater CF) and around the capitol buildings of Tallahassee, asking questions about the origins of Blackwater.

FBI spokesman Special Agent Jeff Westcott declined to either confirm or deny reports of the bureau’s interest in Blackwater.

For the rest of this article, visit Beau Hodai’s website: DBA Press.