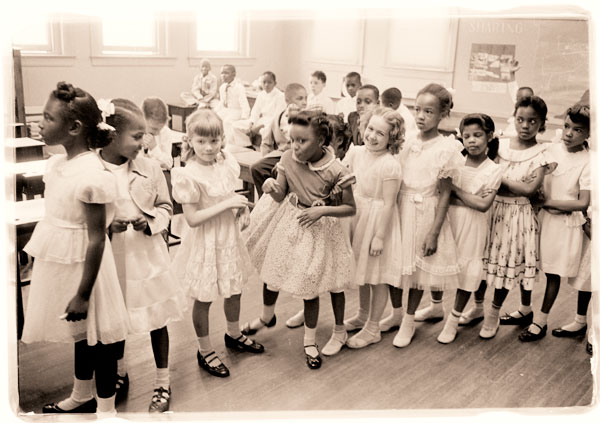 Integration in action at the Barnard School in Washington, D.C., on May 27, 1955. (Photo by Thomas J O'Halloran/Library of Congress)

How our reverence for diversity and multiculturalism helps perpetuate inequality

Progressives have become participants in a ‘separate but equal’ scheme. By promoting diversity, we think we are promoting both equality and individual rights. They are not the same thing.

We like to think of the Supreme Court’s 1954 Brown v. Board of Education decision as a watershed that marked the beginning of an America characterized by greater equality and individual rights. So profound were the changes it wrought, we tell ourselves, that blacks were just one of many minorities that benefited. What began as a demand for greater African American equality enlarged to include the demands of various ethnic groups and “unprotected” classes. We think that what followed the Warren Court’s decision gave meaning to claims that we are a multicultural, pluralist and inclusive society.

The truth of the matter is very different. Ours is, indeed, an admirably pluralistic society. It is also increasingly unequal and shockingly segregated. Our first African-American president, Barack Obama, governs a country in which the richest 1 percent of people takes home almost 24 percent of the wealth–up from about 9 percent in 1976. The median household income of African-Americans is now 40 percent less than that of white households. The nonpartisan Civil Rights Project of UCLA says U.S. schools are more segregated today than they have been in four decades.

What began as a radical egalitarian impulse 56 years ago aiming to remake our educational and racial landscape has ended in the de facto reinstatement of “separate but equal” and an end to most integration efforts. (Recent evidence: In January, the school board governing Raleigh, N.C., eliminated its program of integrating schools based on socioeconomic status.) Yet virtually every institution of higher education takes as part of its mission or value statement a ­set of phrases that recognizes and promotes the diversity and equality of cultures.

How did we get here? How did separateness, which the Warren Court understood as the root cause of inequality in America, acquire such intellectual currency and legitimacy? Liberals and progressives are partly to blame. We fetishize multiculturism–celebrating increasing diversity in government, universities, corporate boardrooms and popular culture–while tacitly tolerating rampant inequality, poverty and informal segregation. Through our less-than-circumspect arguments for multiculturalism, we have engaged in a massive equivocation. The Warren Court would not recognize these arguments as anything but antithetical to its views about education and culture.

‘Stirring the pot’ for equality

When Chief Justice Warren wrote the Court’s unanimous decision in Brown v. Board of Education, the justices were largely reacting to one particular argument in Plessy v. Ferguson. That decision, handed down in 1896, had argued that there was no connection between social equality and civil equality, and it further declared that it had no power to intervene in social and natural differences. The Warren Court, feeling no such constraints, adopted an agenda of social and political change. Integration would be its tool to address civil and social inequalities. It recognized that, as sociological studies had discovered, social and civil inequalities were bound to one another. Segregation and separation led to feelings of inferiority and dependence.

In Brown, the Court could not have stated its point more clearly: Schools are the primary vehicle for acculturation and socialization, and the separation of races creates inherent inequalities. Education the court ruled “is the very foundation of good citizenship. Today it is a principal instrument in awakening the child to cultural values, in preparing him for later professional training, and in helping him to adjust normally to his environment.” Separating racial groups arrested the professional, social and cultural development of the individual. It was hostile to the egalitarian intent of the Constitution.

As a corrective, integration disperses groups and blunts differences. It seeks to ensure that groups are mixed thoroughly, blended seamlessly and “distributed” equally. When the Warren Court landed on integration as its tool to engineer a new social and political equality, it relied on other intellectual currents of its time–assimilation and “the melting pot”–but with a difference. Equality before the law would be restored by stirring the pot, so to speak, and by eradicating separateness to the fullest extent possible.

Modern pluralism and multiculturalism, on the other hand, have at their root the ideas that all cultures or groups are equal; that qualitative distinctions between them are impossible or undesirable; that ethnic cultures–above all differences–should remain distinct and separate and be preserved, much like we would defend an endangered species. The Warren Court had presented an extremely radical and opposing viewpoint. While we can take pride in the decision and in the progress we have made since 1954, we might rightfully ask one uncomfortable question. How did it come to pass that we found “separate but equal” wholly inappropriate in our educational system–as the center of cultural development–and then ultimately enshrined the idea of “separate but equal” in our newfound respect for cultural diversity and multiculturalism?

That newfound respect for multiculturalism can and should exist alongside a core commitment to economic and social equality. But today our emphasis on the former makes it difficult to notice how poorly we pursue the latter to keep the radical promise of the Warren Court’s historic ruling.

Taking the Warren Court’s notion of integration seriously would have led to public policies not limited solely to education. In this, the segregationists and the conservatives may have understood the issues better than many of their contemporaries. Following the logic of Brown, one might have expected a public housing policy that integrated all neighborhoods, so that class and race were distributed. More than a half century after the Brown, it is difficult to grasp the full implications of the idea that integration should be our prescription for change–and that the separation of groups creates inequalities manifest in personal, professional, social and cultural attenuation.

Of course, we have used the thinking around the Fourteenth Amendment–whose equal protection clause became the basis for Brown v. Board–to make progress in a number of areas. We have extended to workers some important rights regarding their work hours, labor standards and wages. In addition to class and race issues, Roe v. Wade extended rights under the Fourteenth Amendment to gender.

Yet, despite these and other meaningful and important advances, nothing in progressive thinking has enough traction when set against the mantras of pluralism and multiculturalism. Progressives have become the chief proponents of cultural diversity and multiculturalism, unwitting participants in a “separate but equal” orientation; we think that by promoting diversity, we are promoting both equality under the law and individual rights. They are not the same thing.

Understood this way, the protection and promotion of the uniqueness of diversity–today’s prevailing “separate but equal” doctrine–is a colossal failure of nerve. It is an avoidance of both social justice and civic equality as it was understood by the Warren Court. True recognition, acceptance and exploration of differences begins with contact, with “mixing the pot” and distributing differences throughout the larger community. Reconciliation occurs by democratically determining and affirming the nation’s shared ideals and goals. Hopefully, it makes the best common to us all.

The paradox is this: Equality is bound to universals and what we share–what binds us together. Equality has little to do with the diversity of groups. Emphasizing differences, particularly of class and race, has historically led to segregation, political particularism and privilege for the few. Put more directly: Every day that we decline to be outraged by America’s growing inequality and persistent segregation, we break the radical promise of Brown v. Board–and make our celebration of it more hollow.

John M. Davis taught social and political thought at the University of Toronto in the distant past and teaches at the College of the Sequoias in Visalia, Calif.