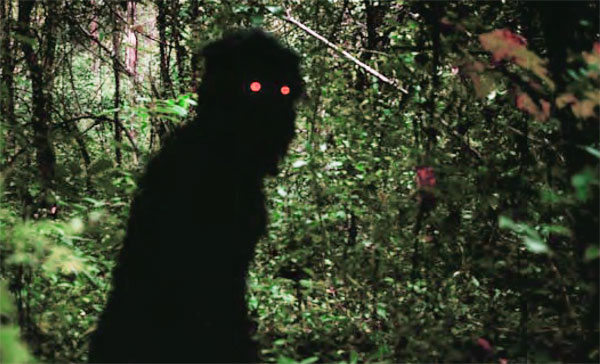 Boonsong, the Bigfootish furry monkey god who has many stories to tell.

2011 has hardly begun, but Uncle Boonmee Who Can Recall His Past Lives is probably the year’s best film.

Thai master of mystery Apichatpong Weerasethakul–otherwise known on the festival circuit and at home as Joe–may be the world’s greatest and most original working filmmaker. If you haven’t confronted his work, you’re missing a heady slice of what cinema in the new millennium has to offer. Which is a pep-rally way of saying that Weerasethakul’s films are radically different than both mainstream multiplex fare and Euro-Asian “art films.”

His new film, Uncle Boonmee Who Can Recall His Past Lives, was sanctified with a top prize at Cannes, but that doesn’t mean we’re looking at the new Kurosawa or Bergman or Wong Kar-wai, a serious artist exploring the modern condition in understandable semi-symbolic ways. Weerasethakul does something without precedent, and what that is is as difficult to nail down as a blob of mercury.

Part of the “problem” a viewer with a certain cast of mind commonly has with this moviemaker is inherent in the way we approach “serious” films–as texts brimming with expressive codes and meanings that embody the artist’s perspective or “vision.” This perspective is a remnant of New Criticism that leaves us interpreting what he or she “meant,” and what the film is finally “about.” Weerasethakul, from his first indie feature, Mysterious Object at Noon (2000)–a title that could apply to each of his films–detours completely around this transactional dynamic. He could better be characterized–buckle up, here comes the poetic critical hyperbole–as an enabler of magical experience. Don’t resist that phrasing, because it applies rather succinctly to the films and describes an essential aspect of cinema in general: its unique capacity to conjure hypnotic experience, its basic form as a visual corridor in which we forget ourselves, and its inherent use as ravishing spectacle and transport.

These are not easily dissected, “meaningful” components, although they are a large part of why we watch movies; we may appreciate the metaphoric thrust behind Antonioni’s empty landscapes or Bunuel’s surrealistic flourishes, but we also bask in their irrational beauty. Uncle Boonmee is nothing if not triumphantly irrational, and seemingly disinterested in narrative per se. Still, it has a story: Boonmee (amateur actor Thanapat Saisaymar) is a widower slowly dying of kidney disease, retiring to his jungle tamarind farm, where his aging sister-in-law (Weerasethakul regular Jenjira Pongpas) comes to care for him. Not terribly philosophical about his approaching demise, Boonmee’s home is nevertheless visited by both the ghost of his wife (Natthakarn Aphaiwonk), who gradually becomes corporeal enough to change his dialysis dressing and embrace him and his son, Boonsong, who appears, after having disappeared many years earlier, as a red-eyed, furry Bigfootish “monkey god,” and who naturally has stories to tell.

That’s merely the first half-hour or so. From there, Weerasethakul dallies and meanders and observes at a pace and in a bemused way that may be Buddhist but is also distinctly his. The only soundtrack for most of the film is the cicada chorus from the jungle outside. Folktales, transmogrifications, glimpses of metaphysical mysteries, tours through the jungle (no filmmaker anywhere loves his native terrain the way Weerasethakul does), sly jokes, surreal references to military violence following Thailand’s 2006 coup d’etat, all scrambled leisurely together and adding up to something beatific and vacational that you live through, not consume or interpret. Late in the film, as Boonmee and his coterie travel through ancient caves, he asks off-camera, “What’s wrong with my eyes?” Someone answers: “They’re open.”

Critically, Weerasethakul could be seen as the ultimate manifestation of the Godardian revolution–that a film isn’t a “convincing” alternate reality but part of our lives, like a painting on the den wall or a piece of music from a passing car stereo, and that moviemaking and moviewatching are equally transparent–and equally beautiful. Just as Godard’s quirky, testy, fun-loving personality, stamped all over his rapturously ramshackle movies, is what make them timeless, Weerasethakul’s films ooze with his applied battery of gentle passions, whimsies, private amusements, childhood memories, idiosyncratic ideas and quiet sense of humor.

The manner in which the filmmaker frames and paces his shots, attends to details of overlooked splendor and generosity, and uses matter-of-fact framing and real time, has something to do, I think, with love–for his characters, for happenstance, for Thailand, for the unexplainable and inexplicable. From the opening sequence, which follows a water buffalo as he liberates himself from his tether and trucks through the jungle as if on an exhilarated spree (observed, it happens, by one of the film’s many red-eyed monkey gods), to a mythic interpolation that has a homely princess seduced in a waterfall-fed pond by a talking catfish, Uncle Boonmee is art that embraces, rather than reorders, life’s chaos. It will probably be the best film released in the United States in 2011–but deciding such a thing would mean measuring it up against others, and already that seems a preposterous task.