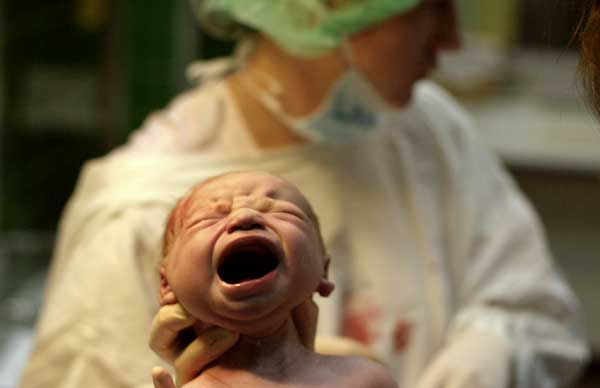 Welcome to the world. (Photo by Tomasz Kobosz)

The Other Labor Struggle

In defense of midwifery.

‘Physicians have been educated to view pregnancy as an illness and to view birth as a life-threatening problem that often requires surgery to save mother and baby.’

Forty years ago, when Ina May Gaskin began working as a midwife, approximately 5 percent of all U.S. babies were delivered by Cesarean section. Today the rate is 32.3 percent. Since we can safely assume that the increase has nothing to do with anatomical changes, logic suggests that the explanation lies elsewhere.

In Birth Matters: A Midwife’s Manifesta (Seven Stories Press, March), Gaskin identifies the culprit. “Women have been taught that they must sacrifice themselves in order to have a baby–that the greater good of the baby means that the mother must submit herself to greater risk, even if that means a C-section for which there is no medical reason,” she writes.

Ah, yes, doctors. Gaskin is aghast at the medicalization of childbirth and Birth Matters is an angry look at the ways medical consumers continue to be manipulated by medical professionals. While the book takes some unfair swipes at feminists–as if the excesses of some early ’70s activists who likened childbearing to slavery were still the norm–it is an important look at the business of reproduction.

Gaskin’s interest in midwifery began shortly after she and her husband Stephen founded The Farm, an intentional community in Lewis County, Tennessee. Women can deliver in The Farm’s midwifery center and can stay on-site for several weeks before and after giving birth, paying a modest (but not insurance reimbursable) fee for room and board. Diary-like accounts from several women who chose this option are interspersed throughout Birth Matters; their reflections are compelling and engaging.

They’re also unusual. Clearly, only a tiny percentage of women have the ability to go to The Farm or choose midwifery in their local communities. Even fewer have the confidence to challenge their doctor’s contention that a C-section is needed. Gaskin finds this unconscionable, and argues that surgical childbirth–frequently a first resort–puts women at unnecessary risk of hemorrhage, infection, deep vein thrombosis and pulmonary embolism. “In 1985 and again in 2007, the World Health Organization convened consensus conferences to review scientific evidence on technologies used in childbirth. These conferences made a series of recommendations, including that the rate of C-sections should never be more than 10 to 15 percent of all births,” Gaskin writes.

So how and when did we go from assuming childbirth could be done naturally, at home, to accepting the necessity of in-hospital deliveries complete with monitors, forceps and scalpels? Gaskin found the answer by probing history. The writings of Dr. Hugh L. Hodge, penned in the late 1830s, were particularly instructive. “If females can be induced to believe that their sufferings will be diminished, or shortened, and their lives and those of their offspring will be safer in the hands of the profession, there will be no further difficulty in establishing the universal practice of obstetrics,” Hodge wrote.

The switch, Gaskin concludes, was aided by a relentless propaganda campaign that denigrated midwifery and elevated medicine–an all-male profession at that time. “Certain influential doctors portrayed the midwife as a relic of the barbaric past, incapable of learning and filthy, making the most of racist and anti-immigrant sentiments that were easy to exploit,” she writes. The strategy worked perfectly, and female midwives–many of them trained in Europe–found themselves shunted aside by patients seeking the promise of scientific security.

The upshot, Gaskin continues, has been profound. For more than 150 years, “physicians have been educated to view women’s bodies as machines that often malfunction, to view pregnancy as an illness, and to view birth as a life-threatening problem that often requires surgery or instruments to save mother and baby.”

Unsurprisingly, Gaskin’s hands-on experience runs counter to these claims. While childbirth on The Farm is never pain-free, she has learned a few tricks-of-the-trade to make it less arduous. According to Gaskin, certain techniques, from deep, slow breathing to laughter, help. So does kissing one’s partner to elevate levels of “ecstatic” hormones. “Women who think that their minds and bodies are separate from each other have little idea how much their thoughts and feelings affect the course of labor,” she writes.

Alleviating fear to lower adrenaline levels is also paramount. Likewise, Gaskin advocates letting nature take its course rather than rushing the process. (In fact, one of the book’s most startling revelations is that most C-sections are performed between 5 and 6 p.m., apparently to allow doctors to exit the operating room in time for dinner.) Lastly, Gaskin encourages physical movement–a short walk, or even dancing, until it’s time to push–instead of lying prone during labor.

Despite these tactics, Gaskin concedes that doctors and surgeons are sometimes needed. At the same time, she argues that since 49 percent of U.S. counties–most of them rural–lack obstetrical practices, training thousands of new midwives and enticing them to move to the countryside makes sense. What’s more, she writes, if we expanded the pool of birth coaches to include midwives and doulas, urban and rural areas would be far better served. “Twenty-five percent of the U.S. population–about 77 million people–live in rural areas, but only 10 percent of doctors practice there and only a few of those–mostly family physicians–provide maternity care,” she writes. Her solution:  Create birthing centers, separate from hospitals, throughout the country. As Gaskin sees it, such centers would involve both midwives and doctors, and would be a cost effective way to provide better access to improved OB-GYN care.

“It is simply unacceptable that a U.S. woman giving birth today has a greater chance of dying than her mother did,” Gaskin concludes, noting that while anecdotes about maternal mortality are widely available, most states fail to collect data about women who die in childbirth. Indeed, Gaskin’s outrage is palpable as she reports that only six of the 50 states require hospitals to report deaths during childbirth to the Centers for Disease Control. Change is clearly needed. Can anyone concerned with perpetuating the human race possibly disagree?