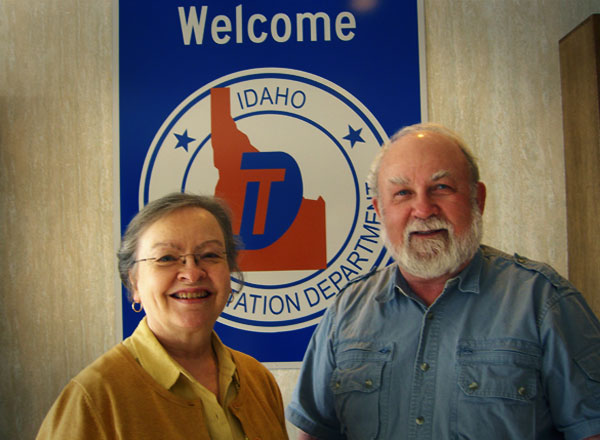 Karen ‘Borg’ Hendrickson and Linwood Laughy have taken on the oil industry in Idaho.

Running Big Oil Off the Road

An Idaho couple pushes back against oil companies’ efforts to transform a scenic road.

When people are willing to go out in a snowstorm and videotape a mile-long convoy along the Lochsa River, you know you’ve got commitment.

In May 2010, Linwood Laughy’s curiosity was piqued by the sight of workmen raising power lines near his home not far from the northern Idaho hamlet of Kooskia. He discovered the lines were being moved to accommodate passage of massive truckloads of oil company equipment along twisting, two-lane Highway 12, a Wild & Scenic River Corridor prized by recreationists, environmentalists and local Indian tribes. No announcement had been made of such plans.

Laughy, a tour company owner, and his wife, Karen “Borg” Hendrickson, began digging for answers. They discovered that several oil companies had been colluding for years with the Idaho Transportation Department (ITD) to transform the beautiful byway into a “high and wide” industrial corridor for hundreds of so-called “megaloads” of oil sands mining equipment, which would block both lanes of this sole access route to hospitals and other services.

The equipment would be barged from the West Coast to the inland port of Lewiston, Idaho, before being trucked across the state into Montana, where the vehicles would veer north to the huge, environmentally controversial oil sands extraction operations in northern Alberta, Canada. (Oil sands, also known as tar sands, are huge deposits of bitumen that are mined and transformed into oil through a process environmental groups say has polluted Alberta’s air, land and native people.)

Hendrickson started a website, FightingGoliath.org, to disseminate what she and her husband were learning. They gathered 3,600 signatures on a petition opposing the megaloads, which threaten the sparsely populated area’s principal industry, tourism. They induced the state to hold a series of public meetings on the issue, during which ITD spokespersons denied any intention to permanently change the scenic route. Laughy and Hendrickson retained lawyers and have been fighting court battles for months. Their grassroots movement spread to Montana, garnering press coverage across America and overseas.

In December, four ConocoPhillips loads got onto the road, traveling at night and parking in the daytime. But that’s light traffic compared to what could come next: ExxonMobil’s Canadian subsidiary, Imperial Oil, wants to truck more than 200 loads into Alberta. A test run conducted by that company in April knocked a 20-foot branch off a tree and later hit a wire that caused a road closure and a five-hour power outage.

The battle to preserve the scenic status quo continues in courts of law and public opinion, as Laughy and Hendrickson continue to fight at the heart of the movement they sparked.

What have you learned about government agencies?

HENDRICKSON: It’s difficult to understand their motives. They seem to be very closed and secretive. At the same time, when we meet people involved in ITD, for example, they’re good people, and yet we hear some of them in public venues telling what we know are lies. So we’ve developed some cautions and suspicions and recognize that to penetrate government agencies, you really need to be willing to prod and push, and use the Freedom of Information Act and the Public Records Act.

LAUGHY: Another way of putting it is, we went from trust, to trust but verify, to verify, to suspect.

What role has the Idaho State Police (ISP) played in this controversy?

HENDRICKSON: All of us are law-abiding citizens and have been all our lives, and have believed that when the police are on hand, we are in good hands. That changed for virtually all the citizen monitors. They all developed a sense that they were being intimidated. Some of them were harassed. Several of them said that the word “terrorist” was used by ISP. The word for the police when they’re out there with the megaloads is “escort.” They really are acting like armed guards, and Big Oil is being protected.

Describe what you call your guerrilla tactics.

LAUGHY:For example, Exxon takes out a full-page ad in the papers all over the state, spending huge amounts of money. We can’t do that, but we can muster letters to the editor. That’s a guerrilla tactic that doesn’t cost anything. It costs people’s hearts and souls and minds and time, but people are willing to do that.

HENDRICKSON: Or we can have three-dozen supportive citizens on the highway in the middle of the night, monitoring what Big Oil is doing. You know you’re doing something that is not in the rules, that is unexpected and probably has never been done before.

LAUGHY: When people are willing to go out in a snowstorm and videotape a mile-long convoy along the Lochsa River, you know you’ve got commitment.

What have you learned about how to deal with the news media?

HENDRICKSON: I started with a core list of media contacts, and just used that. Gradually, the media started contacting me beyond that core list, saying please put me on your list. I think as this story grew, the media were just like other people, drawn to it. And maybe they interacted among themselves and discovered they were getting good information from me and supporting documents that they would have had to go get themselves. We spent probably six hours with the woman from the Los Angeles Times, another six hours with the New York Times reporter, and more than four hours with the Canadian Broadcasting Corporation reporter, although that availability is now harder for us, because we’re feeling more overwhelmed.

LAUGHY: I think related to that is that we both try to be as accurate and honest as possible. Certainly, we have our perspective, but if there’s an error, we correct it. So they recognized our integrity.

What is the origin of the word “megaloads”?

HENDRICKSON: I started saying “megaloads,” and a local newspaper reporter used the term in her first article about this. It just became the word. Linwood came up with those other phrases. We decided we needed to have a way besides numbers for people to visualize all this.

LAUGHY: And Borg came up with “Fighting Goliath” for our website FightingGoliath.org.

HENDRICKSON: And “The Rural People of Highway 12” for its subtitle. Those phrases have narrative attached to them. You don’t have to say any more.

How have you summoned the resolve to devote so much of your lives to this cause?

HENDRICKSON: At some point, when you’ve been touched at that deep level by something, you have to say “yes” or “no” to the question of whether or not you’re going to take this journey. And we said “yes” without question.

Has the experience of leading this movement changed you?

LAUGHY: I have a greater appreciation for living in the United States. A couple months ago an acquaintance of mine, whom I respect a lot, told me he had worked for a large oil company for a few years out of college as a geologist and had traveled in several countries as part of his job. He said Borg and I should be thankful we live in the United States, adding that if we were doing this while living in South America, we would end up being pushed out of an airplane.

Can you think of a better way to solve such disputes than by legal arguments?

LAUGHY: We are both fairly collaborative people. But sometimes you reach the point where there’s no compromise. Either they get this highway or it stays as a Wild & Scenic River Corridor and Scenic Byway. The two are not compatible.

What do you tell people who want advice about starting a grassroots movement?

HENDRICKSON: Know where your heart is when you start. Dig into your soul, and explain what is stirring all the passion in you. This gets back to people.

Steve Bunk is managing editor of Idaho magazine. His writing has appeared in numerous publications, including International Wildlife and Mother Jones.