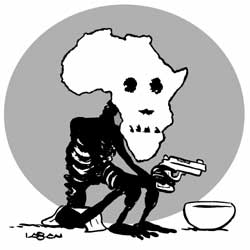 Is There Hope for Africa?

BY G. Pascal Zachary
Share TweetReddit0 EmailPrint
Being held up at gunpoint seems like a rite of passage for those who frequent Africa south of the Sahara. I can recall my first encounter with what, in reference to the “failed states” of the region, Robert Kaplan has called “the coming anarchy.” On a visit two years ago to the old colonial capital of Ivory Coast, a quaint but crumbling seaside city named Grand-Bassam, I took a stroll through dark streets after dinner only to be greeted by three young men carrying handguns. The men emptied me of money. One even took my light vest jacket.

As the robber tried on the jacket, he spun in circles in imitation of a fashion model. As he delighted his fellow robbers with his dance, I realized I’d left my only pair of eye-glasses in the jacket. I insisted on their return. The gunmen fished inside various pockets, found the glasses and returned them to me. As I fastened the specs on my face and looked at my assailants, I felt a sudden source of hope about the African predicament. The moment ended abruptly, however, when the robbers demanded that I flee, or they might shoot me. Off I ran.

Hope would appear not to be a feeling inspired by an encounter (in day or night) with Africa. The ’80s and ’90s are called “the lost decades” for what is also known as “black Africa,” with declines posted in every social and economic metric, in virtually every country. Africa’s problems are so well known as to require only a mere recitation: endless civil wars; exodus of the best and brightest; rampant AIDS; ethnic and religious strife; poor governance and selfish elites; fading economies. These problems have persisted for so long and are so serious that the cover story presented by The Economist magazine in May 2000—“Hopeless Africa”—is no longer viewed as a provocation but a prediction.

Faced with a steady media diet of African tales of disaster, disease, and mayhem, the world hardly recalls the optimism that greeted the independence of much of black Africa more than 40 years ago. Sudan became the first African colony to lose its master in 1956, but with the independence of the West African country of Ghana a year later, the promise of African freedom burst onto the global scene. Ghana’s independence leader was Kwame Nkrumah, a fiery advocate of “pan-Africanism,” a political and moral vision of black brotherhood that cut across national lines and even included the oppressed souls of the African diaspora, still groaning under the boot of Jim Crow and other forms of legalized discrimination in the United States. Ghana’s example made independence for much of the rest of Africa inevitable—and fueled civil-rights protests in the United States.

A half-century later, the optimism has vanished, and even Africans themselves sometimes privately bemoan the sudden passing of colonialism. In my travels, ordinary people often confess that they wish “the whites had stayed longer,” even for another century. Nostalgia for colonialism is no justification to regret African self-government; however, most Africans “do not expect anything from the state,” to quote Fantu Cheru, an Ethiopian scholar. In short, government exists only to be looted—and ignored by those with no opportunity for predation.

What went wrong? The most obvious explanation is that the transition from colonial rule to independence proved more complicated than expected. No revolution marked the break between the two periods, but rather independence was granted by colonial masters who retained great influence over their former charges. What Benjamin Disraeli said in the 19th century was just as true in the 20th: “Colonies do not cease to be colonies simply because they are independent.”

Indeed, students of Africa were concerned about the continent’s fate almost from the start of decolonization. In 1964 the great British Africanist Basil Davidson published a perceptive book— Which Way Africa?—in which he cautiously outlined the barriers to African prosperity: a dependence on the export of raw materials, a lack of educated people, and an untested political system. Ten years later, when Davidson published Can Africa Survive?, his alarm was clear enough in the book’s title. Ever since, standard surveys of Africa have grown more shrill, less buoyant. In 1998, George Ayittey, a Ghanaian teaching in the United States, published to critical acclaim Africa in Chaos. Three years later, Africanist Peter Schwab produced an excellent survey on the region’s problems and prospects, Africa: A Continent Self-Destructs.

But what is missing from these and other studies is any sense—beyond platitudes—of how Africa can get out of its current mess. A new survey of the continent, Africa’s Stalled Development, seeks to remedy this situation. David Leonard, dean of international and area studies at the University of California at Berkeley, has studied Africa for the past 40 years. He has produced, with Scott Strauss, a graduate student and a former Nairobi-based journalist, a succinct therapy for the sub-Sahara. In a little more than 100 pages, Leonard and Strauss distill the latest scholarship, diagnose the region’s central problems, and sketch out credible, even compelling solutions. The result is a rare feat of scholarship: an authoritative work, well documented, and as relevant as today’s news headlines.

From the very first page, Leonard and Strauss balance the need for an honest appraisal of African options with a reasoned sense of hope. Their aim is to blend the best of the critiques from the left and the right. They take a page from conservative critics of development by arguing that aid corrupts African societies and should be reduced. At the same time, the authors accept the established liberal view that Africa is shortchanged by global capital and thus needs relief from debt. Their starting point is radical, likely to provoke those with a serious interest in Africa to rethink traditional views: “We advocate the cancellation of all debts and the reduction of aid in order to return the initiative for Africa’s development to Africans themselves.”

Both debt and aid, Leonard and Strauss argue, make Africans “outward looking,” more concerned about influencing foreign advisers, donors, and bankers than their own citizens. As a consequence, Africa’s “local elites have no stake in the productive capacity of most of their brethren”; they need not depend on their economies for prosperity. Since half of all aid goes toward debt payment, Leonard says, both debt and aid can be reduced in tandem.

Leonard and Strauss’s other radical proposal aims to remove the incentives for insurgents to seize natural-resource “enclaves” within African countries. These enclaves, which provide the dominant share of exports in far too many African countries, usually have only weak ties to the wider locale. While “tribalism” is often presented as a source of violent conflict in Africa, control over these rich enclaves is more often the cause of civil wars. The diamond-producing region of Sierra Leone, seized by rebels, became an important source of cash for the continuation of its civil war. Resource-rich pieces of the Congo, engulfed in war for nearly a decade, provide incentives for armies from other countries in the region to invade. The oil-producing enclave of Cabina, in Angola, proved a bloody target.

Contests over enclaves can only be halted by international actors willing to intervene directly in African affairs. The case of Sierra Leone, where a decade of war was ended by a British occupation force, is paradigmatic. Leonard and Strauss favor what might be called a new approach to international stewardship, where the threat of a peacekeeping invasion is so real that insurgents will no longer attempt to seize resource-rich enclaves. The authors also recognize that “a narrow economic base (enclaves oriented toward foreign export) has proved disastrous” for Africa, and “has dovetailed with high dependence on foreign aid, crippling foreign debt, and a colonial legacy of domestic weak states in order to support a host of negative dynamics in Africa.”

What is still missing in the debate over Africa’s future is the role of the peasant. More than half of all Africans live off the land. Independence meant little change in their lives, partly because of Africa’s failure to achieve “a green revolution” of the kind that transformed the peasantry in India, China, and elsewhere in Asia. Peasant farmers remain invisible in Africa, the victims of government policies aimed at sustaining the lifestyles of urban dwellers by insuring low food prices. There has been no peasant revolution anywhere in Africa.

In African Renaissance: Roadmaps to the Challenge of Globalization (2002), Fantu Cheru observes: “Africa is yet to experience a well-organized peasant movement ready to challenge autocratic regimes in a credible way.” While peasant revolutionary movements have lost their rationale in Latin America and Asia, they may be Africa’s only real hope. Combined with Leonard’s sensible advice on restructuring Africa’s international relations, the political mobilization of indigenous farmers—still the backbone of African society— would set a truly new course for the world’s poorest region. In Africa, peasants are more likely to dislodge parasitic elites from positions of power than are foreign do-gooders. That there is still no sign of a revolution in Africa suggests that the big story of decolonization is yet to be written.