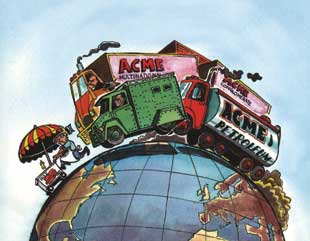 Revenge of the Combat Cartoonist

A man crawls through the burning sands of Arizona’s Sonoran Desert. He is scorched and famished. But he’s not the kind of guy who will accept a glass of water. He wants a Pepsi.

Meet Charro Machorro, the hero of How to Succeed at Globalization: A Primer for the Roadside Vendor, a cartoon history of capitalism by Mexican satirist Rafael Barajas, better known as El Fisgón (“the busybody” in Mark Fried’s translation). As the book opens Charro has braved a dangerous border crossing. But he won’t let anyone confuse him with an undocumented immigrant. He is a taxpaying entrepreneur, he insists, a dedicated capitalist. Back home he works as a roadside windshield-washer who sells snacks to motorists caught in traffic—or, as he prefers to describe it, “a small businessman in the automotive maintenance sector with a subsidiary operation in the peanut industry.”

Despite having read all of the top self-help books, from “How to Succeed, by Dale” to “Better Loopholes,” Charro can’t seem to get ahead in business. Thus, he has ventured into the desert to seek career advice from the famous Cassandra Carrera, a soothsayer and faith healer who specializes in voodoo economics. After he finds her Carrera Clinica, Cassandra shows Charro her crystal ball, which allows them to peer straight into the mind of Alan Greenspan. From there the adventure begins. The two go on a whirlwind trip through economic history, looking for the secrets to how industrious citizens of the developing world can strike it rich in the age of globalization.

It soon becomes evident to the reader that the mind these characters are surveying is less Greenspan’s than Trotsky’s. Loyal to the framework of socialist political economy, El Fisgón provides an accessible and entertaining overview of the end of feudalism, the industrial revolution, the rise and fall of colonialism, the Cold War, and present-day globalization. It’s plenty heavy handed, but you can’t say the author doesn’t warn you. In his prologue, El Fisgón writes, “I have allowed myself the use of certain terms no longer in vogue, such as capitalism [and] imperialism … because, vogue or no vogue, they’re still the best labels around.”

“There are other words,” he adds, “that more than adequately describe … modern-day multinational corporations. But overuse has dulled their edge. Rarely, then, does this book employ such terms as corporate assholes, greedy bastards or plutocratic sons of bitches.”

Of course, Charro will not sit quietly through this pinko chatter. “I come all this way to get a little advice and all you do is badmouth people who try to make a few bucks,” he says to Cassandra. “You know, I think you’re jealous.” She calms him by offering him more services from her spa, a Swedish massage or a high-tech vibration treatment to reduce stress. Then she continues her lessons in market exploitation.

Throughout the tale, El Fisgón proves a tremendously versatile illustrator. His images range from big-nosed cartoon caricatures of public officials, to darkly inked photographic renderings of indigenous Mexicans, to smudged charcoal sketches of gun-toting skeletons. At times, he resorts to cliched conventions: El Fisgón’s bosses are invariably rotund, while his workers tend to be emaciated. But more often he creates a gripping agitprop iconography.

After discussing U.S. reliance in the ’70s on Chilean dictator Augusto Pinochet to put into practice the neoliberal free-market theories that, until then, had only been a twinkle in Milton Friedman’s eye, El Fisgón provides an image of Pinochet kneeling and praying before a cross inside his home. Meanwhile, through an open doorway, the reader can see hundreds of crosses lining the general’s backyard in neat rows.

Extending his story through today’s war on terrorism, El Fisgón shows the U.N. logo, a globe surrounded by laurels. In the next panel, a cowboy boot kicks the globe clear of the frame. George W. Bush, dressed in a Roman toga, then places the laurels above his ears.

In addition to serving as one of the in-house editorial cartoonists at Mexico City’s prominent La Jornada newspaper, Rafael Barajas has illustrated popular children’s books and published a history of Mexican cartooning in the 19th Century, an era when radical “combat cartoonists” rebelled against colonialism and government censorship. Barajas puts his command of art history to work in How to Succeed at Globalization. He visually alludes to period styles in his romp through past centuries and he includes arresting, macabre historical illustrations by Albrecht Dürer, George Cruikshank, and Gustave Doré.

Barajas clearly identifies with his 19th Century predecessors. “I takes sides on everything, even if I see two dogs fighting on the street,” he joked in a 2002 interview with The New York Times. “If a big dog attacks a small dog, then I am outraged. If a small dog attacks a big dog, I figure justice has been done.”

Barajas stands in good company in Mexico City. There, elder statesman Eduardo del Rio (pen name Rius) works alongside a generation of cartoonists that came of age politically in the shadow of the government’s 1968 Tlatelolco massacre of student demonstrators. Along with illustrations by El Fisgón, How to Succeed at Globalization includes drawings by Rius, Antonio Helguera and José Hernández, making it a small treasury of activist Mexican cartooning.

Of course, admirers of right-wing President Vicente Fox have their own satirists. Barajas has publicly complained about pro-government cartoonists who seem to make a far easier living than his leftist colleagues. Yet the fact that El Fisgón has gained considerable notoriety at one of his country’s most prominent newspapers points to a spectrum of acceptable political opinion in Mexico that is considerably wider than in our domestic media. It is as if Al Franken were cracking jokes in celebration of the Zapatistas rather than the bygone Clinton administration.

Indeed, the drawings in How to Succeed at Globalization are not tailored to U.S. sensibilities. El Fisgón’s cartoons on 9/11 and on Afghanistan, although ultimately emphasizing the message that “horror does not justify horror” and that “a world of social injustice is a world where terrorism can thrive,” would have quickly earned him a place of scorn alongside Susan Sontag in the eyes of most U.S. pundits. At the same time, the artist shows that you can get away with a lot more with picture book humor than text-heavy treatise—that taking cartoons into combat remains a vibrant activist endeavor.

At the end of his visit to Carrera Clinica, Charro is shocked to receive a bill for $20,000 itemizing the relaxing care and fine food he inadvertently indulged while hearing of free-market evils. “This is a scam,” he protests.

“All business is a scam,” Cassandra replies with a wink, “but it sure took you a while to figure it out, didn’t it?”