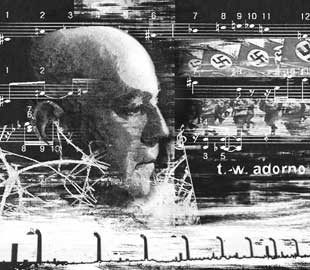 The work of Theodor Adorno, the German-Jewish social and cultural theorist who died in 1969, isn’t likely ever to become “popular.” From the essays on modernist music written in the early days of the Third Reich before he was forced to seek exile in New York in 1938 to the series of densely complex studies of Kant and Hegel written after his postwar repatriation, he produced an intimidating body of work that has consistently provoked antipathy among anti-intellectuals on both the right and the left.

Born in Frankfurt in 1903 into a well-off secular Jewish family, Adorno grew up in a kind of hyper-acculturated environment that it is now difficult to imagine. Weekend afternoons were spent playing double-concertos on the family’s two grand pianos; when he was in his teens, the family hired cultural theorist Siegfried Kracauer to tutor the young Teddy in his study of Kant. There is no record anywhere of his ever having had to work for wages. He was a talented musician and for a time was a protégé of Vienna School composer Alban Berg. He decided instead to take a doctorate in philosophy, writing a dissertation on Kierkegaard.

On the eve of a promising career at his hometown university, he was stunned to find himself barred from teaching there because he was a Jew. Like so many other German Jews from privileged backgrounds, he seriously underestimated the threat posed by the Third Reich. Only considerable efforts by his friends convinced him to finally leave Germany in 1934.

But unlike other exiles such as Herbert Marcuse, who became a Californian, if not an American, Adorno never took to the United States. And it didn’t take to him. Regularly criticized by fellow researchers in New York for acting “so foreign,” he would be caricatured again posthumously by American cultural studies advocates of the ’80s, who condemned him as the para-digmatic European elitist because of his aversion to what he derided as the “culture industry.” Adorno famously loathed both American jazz and Hollywood movies, once declaring provocatively that he liked everything about the experience of going to the movies except what was on the screen.

Lisa Yun Lee’s new scholarly study, Dialectics of the Body: Corporeality in the Philosophy of T. W. Adorno, signals a welcome shift in the U.S. reception of this challenging theorist. Grounding her study not in the culture wars, but in the questions raised by feminism and other so-called identity-based scholarship, Lee gets beyond the usual reduction of Adorno’s work to a face-off between mass-produced entertainment and the high modernist aesthetics he championed. Instead, she opens up a conversation on the much more important central focus of his work—its persistent analysis of the extraordinarily pernicious impact of capitalism, not just on popular culture but on our perception, our bodily experience and, ultimately, our capacity for humanity.

No one was better than Adorno at dissecting the psychic and emotional brutality of capitalism’s regimes of commodification and the increasing pressure it exerts on individuals to define themselves through consumption. This, he argued, led to the compulsion to shut off one’s capacity for empathy, whether with working people whose labor produces commodities (how could we shop at Wal-Mart otherwise?) or those whose homes, lives and futures are being sacrificed in the name of a market-friendly abstraction called “Iraqi freedom.”

Adorno referred to this “shut off” compulsion in refreshingly severe terms, calling it “the mechanism of psychic mutilation upon which present conditions depend for their survival.” As Lee suggests, he surely would have had much to say about our contemporary equivalent of proto-Nazi “body culture,” in which such perverse phenomena as full-body cosmetic “extreme makeovers” have moved from creepy evidence of psychopathology to prime-time entertainment.

Thus, those who assume that Adorno was politically conservative because he didn’t like American mass culture don’t look closely enough at why he didn’t like it—they miss the deep ideological interconnectedness he traced between subjectivity, consumption, production, the conditions of possibility for empathy and, with this, political agency. Because he saw these questions as interconnected, his work can be very hard to read. Yes, it is stylistically complex to an extent that can repel even those who agree with his analysis—“Critique of Capitalism for Dummies” this is not. But I would argue that the complexity is necessary to accommodate his consistent constellations of concerns.

As was the case for the late Edward Said, Adorno did not consider his responsibilities or values as a cultural critic in any way separable from those that obliged him to intervene in public debates over politics and social questions, especially after his repatriation in post-war Germany. He intentionally blurred the distinctions we’ve come to expect between, say, essays on culture and works of sociology, philosophy or political commentary.

Adorno examined the phenomenon of highly commodified mass culture not to get people to read Beckett rather than go to the movies (although he clearly wished we would). Rather, it was a site he could use to expose the seepage of what SUNY professor Rosemary Hennessy has termed “capitalonormativity” into every aspect of modern life.

In one of the autobiographical essays he wrote before his death, Said wrote, “Those of us who are American intellectuals owe it to our country to fight the coarse anti-intellectualism, bullying, injustice and provincialism that disfigure its career as the last superpower.” As a German intellectual who survived his own country’s catastrophic attempt at empire, Adorno provides us with a valuable counter-model to the dumbing down of public discourse upon which the Bush administration relied to win the last presidential election, and upon which its “bullying and provincial” foreign policy depends.

Lee’s book, which engages this work with a generous combination of critical intelligence and compassion, provides us with ample reasons to accept that challenge.

Jamie Daniel is the Director of Organizing and Development at UPI Local 4100, IFT/AFT and a co-chair of the Chicago Center for Working Class Studies.