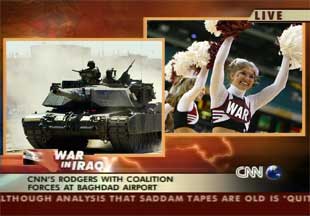 End of the Barrel

Reading the mea culpas on Iraq from previously pro-invasion pundits and “experts” across the media spectrum these past few bloody months, I’ve found myself wanting to shout out loud, “We told you so!” and “You can’t have it both ways!”

But such angry self-vindication is not just bad form; it misses an essential point. In American journalism, you can have it both ways (witness the current success of New Yorker editor David Remnick), and having been right seems only to lead to further marginalization (witness the near invisibility these days of Scott Ritter and Noam Chomsky).

But as the Iraq debacle intensifies—as the corpses and nude Iraqi prisoners pile up—I can’t help looking back in time. While Remnick basks in the reflected glory of Seymour Hersh’s reporting on the Abu Ghraib prison scandal, it’s worth recalling his magazine’s (and most of the media’s) unthinking editorial support for the invasion, as well as for one of its absurd premises—the supposed Saddam Hussein-al Qaeda link. The New York Times and its ace stenographer, Judith Miller, have received their fair share of ridicule for amplifying administration lies about Iraq’s weapons capability before the war, but we shouldn’t forget Jeffrey Golberg’s farcically bad March 2002 New Yorker piece, “The Great Terror,” which relayed the tales of Mohammed Mansour Shahab, a supposed go-between for the former Iraqi dictator and Osama bin Laden.

Nor should we let disappear down the memory hole Remnick’s appalling “Comment,” which appeared about six weeks before the U.S. invasion. In it, he buttressed his endorsement of Bush’s folly with “the comprehensive and convincing case” provided by Kenneth M. Pollack (who has since recanted his faith-based belief in Iraqi WMDs) and praised the president’s war dance before the U.N. General Assembly (an “impressive opening foray” performed “with a gravity appropriate to the occasion”). Remnick’s regurgitations of White House propaganda were accompanied by his own portentous and pretentious calls for pre-emptive action against Saddam: “History will not easily excuse us if, by deciding not to decide, we defer a reckoning with an aggressive totalitarian leader who intends not only to develop weapons of mass destruction but also to use them.”

Instead of reading the “liberal” press these past two years, perhaps we all would have done better listening to people like the slightly crazed bicycle messenger who spied me in my office building elevator toward the end of the first week of “Operation Iraqi Freedom.” Perhaps sensing a sympathetic ear, he blurted out, “We’re getting our asses kicked over there, and they’re not telling us what’s going on.”

I have never been much for man-in-the-street generalizations, but my excitable new acquaintance was clearly expressing something significant about the media coverage of Gulf War II; namely, that expectations and reality had collided in a way not seen in America since the fall of Saigon in 1975.

Except for the brief moment of clarity brought on by the photograph of a U.S. Army Ranger’s corpse being dragged through the streets of Mogadishu, Somalia in 1993, Americans had pretty much forgotten that war is about death—the bloody kind. And that the natives, whoever might be their rulers, often don’t take kindly to the presence of foreigners with guns.

Which isn’t to say that the United States and Britain were ever losing the battle in a conventional military sense, nor that the coverage by embedded reporters was particularly penetrating or accurate. (Indeed, embedded reporters blew the story out of proportion when the drive for Baghdad briefly stalled.) But so much PR effort had been devoted to promoting American military invincibility during the prewar sales campaign that the ordinary citizen (and journalist) could have been excused for forming the impression that “shock and awe” could, all by itself, conquer another country.

Certain things hadn’t changed about American war correspondents since the first Gulf conflict. Credulity and misplaced patriotism remained the rule; dispassionate reporting meant to inform rather than inspire remained the exception. In the first few days of fighting, I happened to be on the French side of the Caribbean island of St. Martin and was able to compare coverage by the BBC, two French channels and CNN. Invariably, the French and British approach was suitably sober, while the CNN reporters and anchors seemed juvenile in their enthusiasm, thrilled to be along for the ride.

On the first Saturday of the war, Walter Rodgers of CNN actually said he was having “great fun,” in response to anchor Aaron Brown’s unwarranted praise for Rodgers’ “terrific … reporting.” (This included such extrasensory observations as, “There were whole families standing up there waving white pieces of cloth that looked like pillow cases indicating they surrender. They had no hostile feelings.”) Indeed, it must have been exhilarating to be racing northward in the company of General George Custer’s storied 7th Cavalry Regiment with the desert wind in your face—as long as no one was shooting at you. (Like Rodgers, Custer enjoyed the adrenaline rush of battle, right up to the bitter end. Like Custer, Rodgers didn’t speak the language of the natives.)

I’ve long resisted overarching theories about the editorial motivations of the American media (allegedly conservative and usually pro-government), preferring to examine individual cases. But on April 21, 2003, after weeks of “support the troops” propaganda on television and in the newspapers, I started to think that perhaps the media critics had a point. How else to explain the advertisement printed at no cost in that day’s edition of the New York Times, sponsored by the 9/11 PR concoction known as the Office of Homeland Security? Topped by a photograph of Homeland Security majordomo Tom Ridge, the headline read: “You’ve probably wondered, ‘Is there anything we can do to protect ourselves from the threat of terrorism?’ Here’s your answer.” The ad appeared the same day as Judith Miller’s fable about the Iraqi scientist in the baseball cap who supposedly pointed to evidence of chemical weapons. Both were free advertising for the Bush administration and its public rationale for war.

But disarming Iraq to achieve domestic security was never more than a pretext; the real motivations for the war were conquest, geopolitics and oil. Ridge’s new bureaucracy was little more than an advertising slogan. And Miller’s news story was little more than government propaganda. So what was the Times—and its publisher Arthur Sulzberger Jr.—doing, if not turning over its good name for use by the state? Always jealous of its position as the paper of record, this ultra-respectable paragon of objectivity seemed to be leading the rest of the media over a precipice, to a land of somnambulance from which it might never return.

In both Gulf wars, the degradation unto sleep of the U.S. media was largely self-inflicted. So, when al Qaeda struck the Western residential compound in Riyadh, Saudi Arabia, on May 12, 2003, killing 34 people, including at least eight U.S. citizens, the question could be asked: Was there any American reporter awake to cover the real story?

By December, with the number of U.S. war dead approaching 500, the total of wounded topping 2,000 and an Iraqi guerrilla movement seeming to grow stronger by the day, it finally dawned on some in the media that “liberation” might actually mean occupation and a very long and violent conflict. Nobody was counting the thousands of deceased Arabs—innocent noncombatants as well as anti-U.S. rebels—but the outline of a new “Vietnam Syndrome” had emerged on the political horizon, most obviously in the newest version of Pentagonspeak.

During the Vietnam War, Johnson administration officials, particularly in the Pentagon, frequently employed euphemisms—“protective reaction,” “body counts,” “kill ratios,” and the like to obscure the failures and destructiveness of the U.S. military. This mangling of political language was most famously crystallized in the metaphoric slogan, often attributed to General William Westmoreland, that the government could see “the light at the end of the tunnel” of the U.S. war effort—when precisely the opposite was true.

Now, with American war dead pushing 800, Donald Rumsfeld and his generals talk of “staying the course” on the road to Iraqi freedom. With dreadful zeal, the defense secretary makes mad comparisons between the occupation of Iraq and our own horrific Civil War, as though ending slavery inside the United Sates was morally equivalent to the establishment of a Potemkin-village democracy among tribal-based Arabs who never asked us to come in the first place.

There’s no light at the end of an American gun, just bullets. Despite all the second-guessing on Iraq, the U.S. media still hasn’t figured it out.

John R. MacArthur is the publisher of Harper's Magazine. He's the author of The Selling of Free Trade and You Can't Be President: The Outrageous Barriers to Democracy in America.