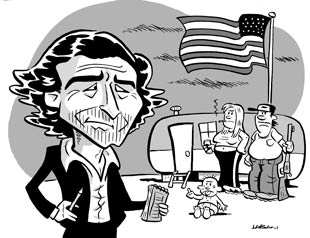 The Lies of Bernard-Henri Lévy

Bernard-Henri Lévy is so ubiquitous in France’s media that he is universally referred to as BHL. But in Parisian intellectual and journalistic circles he is known by the moniker BHV–the French department store that sells anything and everything. BHL had hoped to sell himself to the United States with American Vertigo, in which he travels the United States “in the footsteps of Tocqueville.” No one is buying.

American Vertigo reminds me of that old movie, If It’s Tuesday, This Must Be Belgium, about American tourists hip-hopping Europe in great haste. BHL’s account of his lightening-quick stops in various parts of the country–chauffeur and translator in tow–is receiving universally bad reviews, especially in the cities he visited, whose local newspapers have made a sport out of pointing out how he got it wrong. Meanwhile, the book’s bric-a-brac of dime-store observations has been widely ridiculed. In the front page of the New York Times Book Review, Garrison Keillor skewered BHL for “the grandiosity of a college sophomore, a student padding out a term paper,” adding, “There’s no reason for [the book] to exist in English, except as evidence that travel need not be broadening.” Enough said.

Two French journalists–Nicolas Beau of Le Canard Enchainé and Olivier Toscer of Le Nouvel Observateur–have just published in Paris Une Imposture Francaise (A French Imposter), an inquest into how BHL has built his success. They write:

A philosopher who’s never taught the subject in any university, a journalist who creates a cocktail mingling the true, the possible, and the totally false, a patch-work filmmaker, a writer without a real literary oeuvre, he is the icon of a media-driven society in which simple appearance weighs more than the substance of things. BHL is thus first and foremost a great communicator, the PR man of the only product he really knows how to sell: himself.

The flaws in BHL’s work have been evident from the beginning. His third book, the 1979 Le Testament de Dieu, was shot down in flames by Hellenist historian Pierre Vidal-Naquet (a moral leader of the French left) in a famous Nouvel Observateur article that detailed BHL’s numerous errors. To take just two, BHL cited texts he claimed were from the decline of the Roman Empire (fourth century) which were actually from the first century B.C., and cited Heinrich Himmler’s “deposition” at the Nuremburg trials, which opened six months after the SS leader’s suicide. Interviewed 20 years later by Jade Lindgaard and Xavier de la Porte, the authors of Le B.A. BA du BHL (The ABCs of BHL), Vidal-Naquet said sadly, “We have passed from the Republic of Letters into the non-Republic of Media. I thought I had ‘killed’ BHL. I hadn’t. I consider that a defeat.”

From the giant publishing house of Grasset–where BHL has been an editor since 1973–he launched his first media operation: the creation of the “nouveaux philosophes,” a band of scribblers of whom he was the most visible, whose leitmotif was anti-Marxism, anti-Communism, anti-anti-Americanism, and the embrace of the free market as guarantor of human well-being. Their books championed monotheism and anti-ideology as the only possible response to the moral collapse of Communism, thus fostering depoliticization in the wake of the evaporation of the “spirit of May 1968” and the triumph of consumer culture.

BHL launched his second book, Barbarism with a Human Face, from the platform of the high-rated, prime-time literary talk show, “Apostrophes.” A handsome dandy, with studiously coiffed long hair, and a white shirt carefully unbuttoned to reveal his tanned chest, BHL caused the TV host’s daughter to tell him afterward, “I have seen Rimbaud on television!”

That unbuttoned white shirt, by the way, is an important element of BHL’s TV and public images and it tells a lot about the man. If you tried it with your own shirt, the collar would sag. But BHL’s shirts are specially designed by the famous shirt-maker Charvet, with collars that withstand the unbuttoning and never disappear under his jacket. The effect costs some $400 apiece, but BHL is a very rich man. The business magazine Capital recently named him one of the 100 richest people in France.

Born with a silver cuillère in his mouth, BHL inherited the family’s huge lumber business, Becob. He played a major role in running the company, until it was sold in the early ’90s. The company specialized in rare woods from Africa and–as Une Imposture Francaise reveals–while BHL was running the company, numerous international bodies and a report from the Canadian government denounced it for keeping its African workers in penurious semi-slavery, which rather contradicts BHL’s pretensions to be an international humanitarian activist.

The book also describes BHL’s shady stock market speculations, his being questioned by the authorities about insider trading and the secret shell companies he owns in France, Switzerland, England and America, and his troubles with the taxman over undeclared revenue that led to a recommended indictment. Before it could be executed, the indictment was quashed by one of BHL’s new-found conservative friends, the then-Minister of Finances, Nicolas Sarkozy, the rising star of the right. Sarkozy is only one of the many politicians BHL has cultivated, by praising him in print while also commissioning Sarkozy to write a book for Grasset–a favorite BHL ploy for seducing everyone from TV hosts to literary critics.

BHL changes his political allegiances like one of his shirts. A courtier of Francois Mitterrand, BHL supported his presidency by helping create SOS Racism, ostensibly a civil rights group for young Franco-Arabs and blacks. Une Imposture Francaise, however, reveals that the group was only a media-driven vote-getting mechanism for Mitterrand that was completely created by the Elysée Palace (France’s White House). He also helped launch the monthly magazine Globe, designed to be a media arm of Mitterandian propaganda, in which BHL’s column was featured on the front page of every issue.

BHL was rewarded for these efforts with the chairmanship of the government commission that provides subsidies to French cinema. BHL used this post, which has life-or-death power over French films, to finance his own failed cinematic creations as well as movies starring his glitzy trophy wife, the actress Arielle Dombasle. But, when he sensed that Mitterrand’s star was fading, he began cozying up to and promoting the conservatives’ Prime Minister, Edouard Balladur–and was soon rewarded with the presidency of the state-owned TV network Arté, where he continued using taxpayers’ monies to subsidize his own productions, those of his friends and, of course, projects featuring Dombasle.

BHL’s fatuous intellect was on full display in the Feb. 27 issue of The Nation, when he wrote “a number of progressives needed, by their own admission, to wait for Hurricane Katrina before they got indignant about, or even learned about, the sheer scale of the outrageous poverty blighting American cities.” BHL had no need to wait for Katrina; he predicted her arrival.

In an interview with New York magazine, BHL claimed his American “trip was under three shadows … The shadow of the war in Iraq, the shadow of an election, and the shadow of Katrina.” When the interviewer pointed out that Katrina “hadn’t struck at the time he wrote the book,” BHL simply pirouetted: “The anticipated shadow of Katrina. I was in New Orleans four or five months before Katrina, and I more or less foresee what is going to happen.” As BHL likes to say dismissively when caught in a falsehood, “Ah, but the ink dries so fast …”

This incredible statement, however, proves the accuracy of the judgment rendered on BHL by Mariane Pearl, wife of the subject of BHL’s last book in English, the hallucinatory and factually nonsensical Who Killed Daniel Pearl? Says the disillusioned Mrs. Pearl, BHL is “a man whose ego destroys his intelligence.” Those are les mots justes.