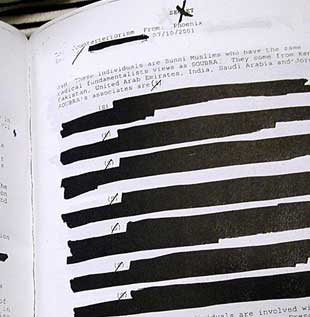 The explosive report on the abuse of Iraqi prisoners in Abu Ghraib prison by Maj. Gen. Antonio Taguba may mark a turning point in the U.S. war in Iraq. By now it must be one of the most widely disseminated internal military documents ever prepared.

Yet it also is a “classified” document that was supposed to remain “secret.”

“I do not know specifically why it was labeled secret,” said Gen. Peter Pace, vice chairman of the Joint Chiefs of Staff, in response to a reporter’s question on May 4.

Defense Secretary Donald Rumsfeld didn’t know either. “You’d have to ask the classifier,” he said.

That’s hard to do given the identity of the classifier does not appear on the document, which itself is a violation of official classification procedures.

But the explanation is not too hard to figure out.

Secrecy is the first impulse of bureaucrats seeking to avoid controversy and to manage public perceptions. Invoking national security provides a formidable barrier to inquisitive reporters and ordinary citizens. Classifying inconvenient facts is an understandable temptation, but one that is poisonous to democratic institutions.

Secrecy per se is not illegitimate. There are many instances where national security classification actually serves the broad national interest: design details of weapons of mass destruction, the identities of confidential intelligence sources, authorized military operations and diplomatic initiatives and so forth. These are all things that, by common consent, are normally kept secret.

But inevitably, the authority to classify information, once granted, is liable to be abused. Broad categories of information are sequestered as national security secrets even when they are innocuous (e.g., the total dollar amount spent annually on intelligence) or because they are a source of awkwardness or embarrassment (e.g., the grudgingly declassified President’s Daily Brief from August 2001 captioned “Bin Ladin Determined to Strike in U.S.”

Under the Bush administration, secrecy is growing sharply.

According to the government’s Information Security Oversight Office (ISOO), which reports to the president annually on classification and declassification activity, the number of new classification decisions exceeded 14 million in 2003, an increase of 25 percent over the 11 million secrets generated in 2002.

It is to be expected that secrecy will increase in time of military conflict, and many of these secrets, perhaps most of them, are likely to meet the nominal standards of the classification system.

But just as clearly, others do not.

In fact, the classification of the Taguba report on torture of Iraqi prisoners appears to be a positive violation of an executive order that states: “In no case shall information be classified in order to … conceal violations of law, inefficiency, or administrative error [or to] prevent embarrassment to a person, organization, or agency” (Section 1.7 of Executive Order 13292).

In spite of this, Taguba’s finding that “numerous incidents of sadistic, blatant, and wanton criminal abuses were inflicted on several detainees” was classified “secret.”

My organization asked the ISOO to initiate an investigation into the decision to classify the document. To his credit its director, William Leonard, promptly agreed to do so.

Meanwhile, thousands of photographic and video images of torture also are being protected as national security secrets.

The photos were classified by the Pentagon, a spokesman for Virginia Sen. John Warner, chairman of the Senate Armed Services Committee, told the Washington Times on May 11, and “only military officials can decide to declassify and release them.”

There may be valid reasons to withhold or modify some of these images—to protect the privacy of victims and third parties or to preserve the integrity of current or pending prosecutions—but national security classification cannot legitimately be used to withhold evidence of criminal activity.

The fundamental issue goes deeper than torture or the war in Iraq. It is a question of whether we shall have responsive, accountable government. We have evolved a political system for regulating the actions of our leaders, exposing errors and misdeeds, and correcting them. Official secrecy is an assault on this delicate and vital mechanism.

Steven Aftergood is director of the Project on Government Secrecy at the Federation of American Scientists.