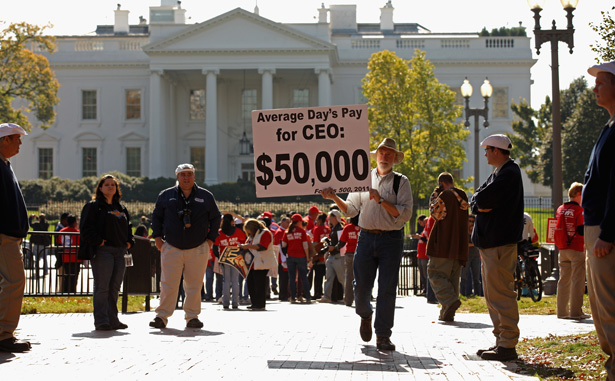 Members of National Nurses United demonstrate in front of the White House on November 3, 2011. A bill signed by President Obama this week will increase restrictions on protest in certain parts of the District of Columbia.
(Photo by Chip Somodevilla/Getty Images)

In certain corners of the Internet, concern has been gathering about another so-called “Anti-Occupy” bill.

Last week, H.R. 347, otherwise known as the Federal Restricted Buildings and Grounds Improvement Act, passed the House 399-3, and on Thursday it was signed into law by President Obama. In response, bloggers from the libertarian Daily Paul to the leftist Daily Kos accused the federal government of gutting the First Amendment.

Did something important happen while the rest of us were rolling our eyes at Rush Limbaugh?

According to the ACLU, there is indeed something disturbing about H.R. 347—but it had already been part of federal law long before last week.

The new bill modifies a 1971 law that restricted entering or blocking public areas cordoned off by the Secret Service while a protected individual is passing through, or during major public events like the Super Bowl or party nominating conventions. Violators can face up to a year in jail; if they’re carrying a dangerous weapon, it’s ten.

Of course, it’s probably a good thing that the police can arrest strangers with guns who try to get a little too close to the president. But more recently, this law has been used to shunt protestors at major political events into “free speech zones,” isolated from the crowds—and cameras—that might give their constitutionally-protected demonstrations some heft. Another issue is that the Department of Homeland Security has fairly wide latitude in what areas it can declare off-limits.

This has major implications for anyone planning protests at the NATO or G8 conferences later this spring, including Occupy. But that would have been the case whether or not H.R. 347 had passed.

What, then, has changed? First, certain parts of the District of Columbia, like the White House lawn, were added to the list of federally protected areas. (Previously, they had only been covered under DC trespassing statutes.) Second, and somewhat more ominously, it’s now easier for prosecutors to convict people arrested under the law. Before, violators had to “willfully and knowingly” enter a protected area, meaning that they knew the area was protected, and knew that it was illegal for them to be there. H.R. 347 deletes the word “willfully,” meaning that prosecutors no longer need to prove that someone knew what they were doing was illegal to convict them.

In other words, Congress removed a hurdle in enforcing the law without actually adding any new restrictions to the First Amendment. Then again, the restrictions that already exist are enough to concern anyone who believes the right to assembly is a crucial part of the democratic process.