The Limits of Military Intervention in Syria 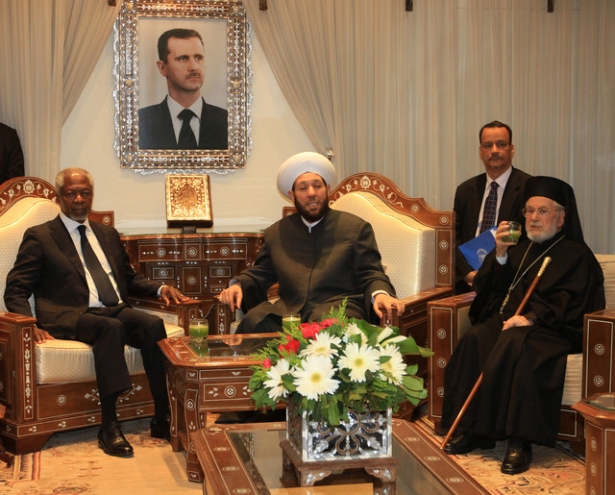 Kofi Annan, joint envoy of the U.N. and the Arab League to Syria, met with Syrian religious leaders on a trip to the country in March. (Louai Beshara/AFP/Getty Images)

Though international envoy Kofi Annan said last week that the U.N.-backed peace plan for Syria is "on track," violence is continuing. More than 8,000 Syrians have already died in the fighting since peaceful protests began in the country in March 2011. Centers of dissent such as the cities of Hama and Homs are still being ruthlessly attacked by forces loyal to the Assad regime. Pro-regime forces are also targeting those who have spoken to the few U.N. observers currently in the country and anyone able to send news or video reports out of the country in spite of the regime’s media lockdown.

At first glance, the situation in Syria might look a good deal like what we saw last year in Libya—a peaceful protest, an autocratic leader, violent repression and strongholds of resistance under siege. But the situation in the two countries is very different.

1. Syria is not isolated

One of the benefits Libya’s opposition forces had was that Ghaddafi had done a great deal to isolate himself from the rest of the world with his mixture of outlandish behavior and flip-flopping allegiances. Its not surprising that such a fair-weather friend would find himself alone when he needed help.

Syria has a much closer relations to its neighbors, particularly its Lebanon, where Syria has been deeply involved ever since it was invited into the country by a center-right political group to help it crush its political opponents in 1976, as well as its strong ally, Iran. Syria also has the sympathy of many people in the region who perceive the country as an important opponent of Israel, particularly for its support for the Palestinian cause and violent armed groups such as Hezbollah. As one Lebanese activist interviewed by Al-Jazeera commented: "If [the regime in] Syria is taken out of the equation it will be a major blow to those who support Palestinian liberation." Most importantly, Russia and China have not wavered in their support of Assad’s regime, proving much needed political support in the U.N. and elsewhere.

Opposition groups in Syria are not unified. The internally recognized Syrian National Council (SNC), which operates outside of Syria, is split between secular and Islamist groups, particularly the Sunni Muslim Brotherhood (the target of the 1982 Hama massacre). The National Coordination Body for Democratic Change, a mostly secular group within Syria, is willing to negotiate with the Assad regime and does not want foreign military intervention, unlike the SNC. Meanwhile, the Free Syria Army is little more than a “loose affiliation of local militias” rather than a coordinated military power. Considering the variety, it is difficult for the international community to know exactly where to jump in.

Military intervention, always on the top of the list of modern warship diplomacy, is not being advocated seriously by many (though it has a vocal U.S. supporter in Senator John McCain). Even normally hawkish conservative think-tank The Heritage Foundation is encouraging continued diplomatic pressure, saying that, “At this point, an outside peacekeeping force would only become embroiled in the conflict as a combatant. That might increase the suffering of the Syrian people, which is sure to continue as long as Assad remains in power.”

James Traub, a proponent of arming Syrian insurgent groups, has referred to this as the “neo-mujahadeen” option—a reference to the U.S. funding of various rebel groups to fight against the Soviet Union during the Afghan civil war. Most of the funding for this plan would come from countries already funding the resistance, such as Saudi Arabia, Qatar and the United Arab Emirates, who see the fight as part of a larger proxy war against Iran. The involvement of these extremely anti-democratic nations in the international process to mediate the situation in Syria is extremely problematic as their governments, as one journalist put it, make Syria’s look like "a hippie commune."

Finally, though diplomacy is a slow and frustrating option it may be the only viable one for resolving the conflict. The key focus is on the Six Point Plan that was submitted on March 16 by Kofi Annan, former Secretary General of the U.N. and current joint envoy of the U.N. and the Arab League to Syria. As many people have pointed out, Assad—and to a lesser extent anti-regime groups—have already bucked the plan by ignoring a proposed ceasefire and continuing to kill civilians. But the diplomatic option doesn’t have to be perfect to make progress, as Foreign Policy's Marc Lynch argues:

It is highly unlikely that Bashar al-Assad or his regime will voluntarily comply with a ceasefire, and even more unlikely that they will surrender power. But international diplomacy does not depend on Assad’s good intentions. Instead, it aims to demilitarize the conflict and create the political space for change driven by Syrians disgusted by the destruction of their country. Demilitarization through a ceasefire and political opening would undermine Assad’s survival strategy, not save him from an otherwise certain defeat.