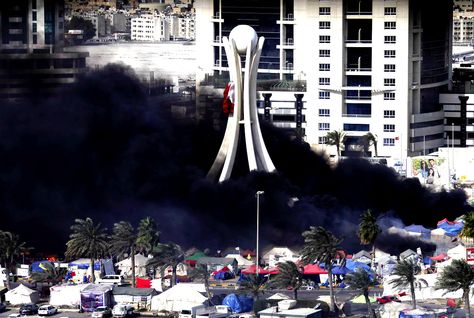 The iconic Pearl Monument amidst democratic protests last year in Bahrain, before it was torn down.
(Photo: Behrouz Mehri/Getty Images)

Over the weekend, the United States decided to resume part of its arms shipments to Bahrain, more than one year after a $53 million deal with the country was suspended during violent crackdowns on peaceful protests in the country last year. This follows news that prominent Bahraini human rights activists Nabeel Rajab, head of the Bahrain Centre for Human Rights, was arrested last week on unspecified charges. These events closely follow major series of “days of rage” protests by opposition groups that coincided with the Formula 1 grand prix the gulf nation hosted at the end of April, which was successful in scaring off many tourists and bringing attention to the abuses of the regime of King Hamad bin Isa Al Khalifa.

Like Syria, Bahrain’s protests have been ongoing since February 2011, when protestors took to the streets to demand democratic reforms.  After clashes with the police left 35 people dead and many more injured and in prison, the Khalifa regime cleared the occupation in Pearl square and tore down the symbolic Pearl Monument. (The regime has gone to great lengths to banish even the memory of the square by tearing down the monument and even taking the 500 fils coin, which bore the monument on one of its sides, out of circulation.)

The big thorn in activists' sides is the Khalifa monarchy, which has been in control of the country for 200 years. The current prime minister Prince Khalifa bin Salman Al Khalifa has been in power since 1971, making him the longest-serving prime minister in the world. When asked about this rather undemocratic aberration by German news magazine Der Spiegel, Prime Minister Khalifa argued that every democracy is different in its own way.

But calling Bahrain democratic is misguided. Though they have a Parliament of elected officials, that body has very little actual power compared to that of the Khalifa family. Though there are some reformist members of the family, such as Crown Prince Salman bin Hamad Al Khalifa, it is hard to see the family relinquishing power quietly considering that 70% of the country’s Muslims are Shia and have been victims of discrimination at the hands of the regime for many years.

In response to the protests, the government’s argument has been two-fold: that the government has made concessions and are willing to work with peaceful groups but that outside agitators, particularly Iranian interests, have been stoking factional fires for their own goals. The regime has been pointing to the growing violence of some members of the protest movement—particularly the using of Molotov cocktails—as a sign of the entire movement’s hostile intent.

But a clear look at the opposition groups shows a number of different interests and ideological backgrounds. Al-Wefaq, the leading Shia opposition group, want a constitutional monarchy. Other groups, such as the Coalition for a Bahraini Republic, are looking for more radical democratic reforms, including regime change. There is also the National Union Gathering, which was founded at Bahrain’s largest Sunni mosque, Al-Fatih, which is agitating for more democratic reforms while also criticizing what it sees as the anti-Sunni bias of some Shia opposition movements.

The U.S. seems to have two tracks of action against repressive regimes. On the one hand, there is the strong and swift denunciation, followed by sanctions and military action, which we have seen in countries such as Iraq, Libya, Afghanistan and, to a lesser degree, Syria. Then there is the reluctant or behind-the-scenes criticism reserved for equally repressive regional allies that the U.S. does not want to alienate unless they don’t have any other choice, such as Saudi Arabia, Kuwait and Egypt. The U.S. response to Bahrain has been of the latter kind. There are a number of reasons for this:

As long as the U.S. chooses to coddle some repressive regimes while attacking others, it is only confirming that spreading democracy is only shorthand for the U.S. doing whatever it wants wherever it wants to.  With a different policy towards the legitimate democratic concerns of regime opponents in Bahrain, the U.S. has an opportunity change its image in the region.