Beyond the ‘Second Shift’: Mothers in Service Jobs Work a Third 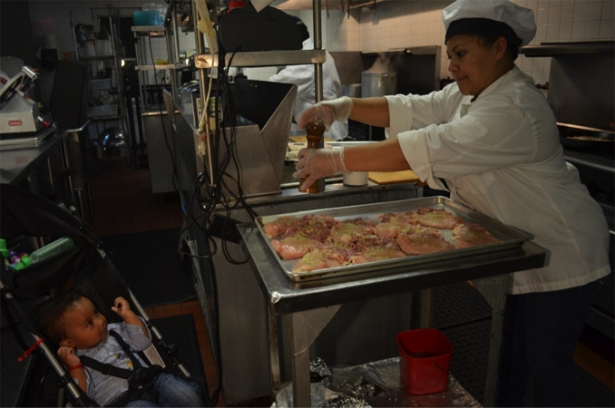 The New York Times ran a story this Sunday about the growing ranks of white, middle-class professional women who are choosing flexible work arrangements over a fast-track up the career ladder. “I never miss a baseball game,” one mother told the Times reporter—a record that's achievable because she works from home some days. Work-life balance has been an area of growing concern as daughters of the New Left have grown up, gotten jobs and had families. Books such as Lean In, by Facebook COO Sheryl Sandberg, advise women that they can have it all—family and success at work—if they take more risks in their careers.

Unfortunately, mothers working in low-wage jobs, many of them women of color, don’t have the option to step up into risky ventures with high opportunities for growth. As government support for children and families have shrunk since the 1980s, many women have been pushed into low-paying service jobs and can barely keep step with the economic demands placed on them. Restaurants employ 10 million workers in this country; half are women, and two million are mothers. The Bureau of Labor Statistics predicts that the service sector will grow to 80 percent of our economy in the next decade.

The Restaurant Opportunities Centers United (ROC-United) has released a new report, "The Third Shift," documenting the challenges that mothers working in restaurants face in balancing their precarious work, for which some earn subminimum wages, with little to no child care support. (Full disclosure: I am ROC-United's research director and worked on the report.) The title references the famous study by sociologist Arlie Hochschild describing the "second shift" of housework that women must do after clocking out and returning home. The mothers interviewed in our report must also work an unpredictable "third shift," thanks to the erratic schedules endemic to our new service economy. Working mothers are a floating and flexible workforce, always on call, without any control over their jobs or their hours.

These mothers also face a Catch-22: In order to receive child care assistance through federal child welfare programs, they are forced to accept any job they can get. And most jobs out there are crappy jobs. It’s no wonder that on average, mothers who earn an income spend more than a third of it on child care.

Daniella*, a 40-year-old black woman with two children who was interviewed in the report, works as a server in Detroit. Like many restaurant workers who rely on a tipped income, she earns $2.65 an hour. The tipped minimum wage has been frozen federally for the past 22 years at $2.13, an income barely enough for mothers to pay for child care, let alone other living costs. Servers comprise the largest occupational category in the restaurant industry. They are disproportionately women, and 1 in 5 is a mother.

“If you’re in the restaurant industry in a waitress role, then you depend on tips,” Daniella explained.  “If [you] don’t get any tips, you can’t pay the bills, because you only get paid $2.65 an hour, so your paycheck is worthless to you.” Daniella earns $90 on average a week, but isn’t able to pay for child care in a daycare center with those earnings.

Over three-quarters of the working mothers we surveyed told us that a child care subsidy was important to them. However, public assistance for child care has been plummeting since the right-wing attacks on the safety net began in the '80s. Monies allocated for children were cut by $2 billion between 2010 and 2011 alone. All of this has led to a strain on public sector programs that provide help to struggling mothers and their families. As it is, only 1 in 6 potentially eligible children benefit from child care subsidies. In 2012, 23 states had waiting lists or stopped accepting new applications for child care assistance.

One of the mothers we interviewed in Baton Rouge, La. needs support to care for her four children to find restaurant work. But, because she's unemployed, she doesn't qualify for child care assistance. Mothers are further penalized by the child welfare system. Approximately 2 percent of all mothers we surveyed reported that they had arrived late to pick up their child because of work, and a child care provider had threatened to call Child Protective Services. Some Detroit mothers who couldn't afford to pay their utilities bills not only had their services shut off, but also had their children taken away and placed into foster care until they could pay the balance.

Given that 4 out of 10 households today, according to a Pew Center report, are headed by breadwinner moms, this is a national emergency. With mothers earning 4 percent less per child than fathers or women without children, the cost of raising the next generation is borne solely on their backs. Children are public goods, as feminist economist Nancy Folbre has argued, and the country benefits from the earnings of future working-age adults through Social Security and public debt.

There's an extremely straightforward solution to the problem of affordable child care. We need comprehensive, universal pre-K at the nontraditional hours that our service economy runs on today.

Yvonne Yen Liu is the Director of Global Movements at WhyHunger, which is a member of the U.S. Food Sovereignty Alliance.