Do Federal Prosecutors Have a Vested Interest in Blocking Sentencing Reform? 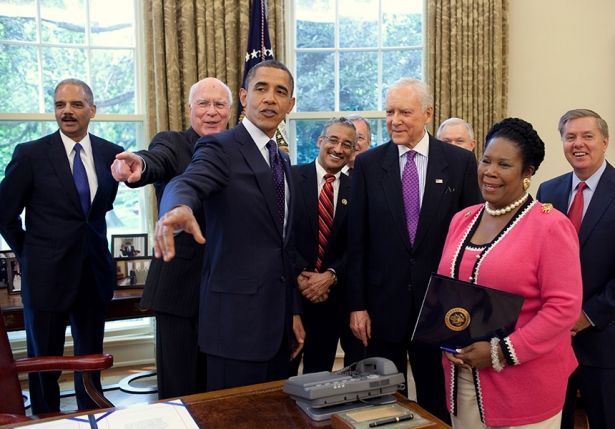 In the years since mandatory minimum sentences were put in place by the Anti-Drug Abuse Act of 1986, they’ve been roundly criticized for imposing upon nonviolent, low-level drug offenders sentences that are, as one federal judge put it, “so excessively severe they take your breath away.”

Such steep sentences are not only draconian, they also place undue pressure on defendants to forgo their right to a trial in favor of a more reasonable plea bargain. Mandatory minimums have also been criticized for disproportionally burdening people of color due to disparities in when, how and against whom they are employed.

After three decades, a push to reform these unfair practices is finally gaining traction. In August, U.S. Attorney General Eric Holder announced that the Department of Justice (DOJ) would no longer pursue mandatory minimum sentences for certain nonviolent and low-level drug offenders. “We cannot simply prosecute or incarcerate our way to becoming a safer nation,” he said.

The DOJ’s statement amounts to an executive decree and is neither legally binding nor assuredly permanent, but Congress may be poised to act on minimum sentences. The Smarter Sentencing Act, one of many proposed reforms aimed at reducing the federal prison population, was introduced last July and, if passed, would curtail minimum sentencing for drug offenses, slashing incarceration times in half for many defendants. Holder has come out in support of the bill, and the American Civil Liberties Union (ACLU) has called the act “the most significant piece of criminal justice reform legislation to make it to the Senate floor in several years.” Last month, the Senate Judiciary Committee voted to move the bill to the floor, albeit a weakened version that includes three new mandatory minimums for non-drug-related offenses.

Despite the watering down, the bill has momentum, as well as bipartisan support. But not everyone in the DOJ supports reforming mandatory minimums.

The National Association of Assistant United States Attorneys (NAAUSA), a group that represents about 1,300 of the DOJ’s 5,600 federal prosecutors, has come out strongly in favor of maintaining the mandatory minimum status quo. In a letter to Holder, Robert Gay Guthrie, president of the NAAUSA, described minimum sentencing laws as “well-constructed and well worth preserving.” According to a NAAUSA-conducted survey, only 15 percent of the nearly 650 federal prosecutors polled support the Smarter Sentencing Act.

In the letter, Guthrie maintained that mandatory minimum sentences “reach only to the most serious of crimes.” For Guthrie, the system singles out hardcore offenders and equips prosecutors with the tools to “secure cooperation” from the accused. Mandatory minimums, he goes on, “establish uniform[ity] and consistency in sentencing. … they protect law-abiding citizens and help to hold crime in check.”

But mandatory minimums ensnare far more than “serious” offenders such as drug kingpins and violent drug dealers. Because mandatory minimums are triggered by the amount of illicit drugs found on a defendant, rather than their role in a criminal organization, drug mules are routinely handed the same sentences as cartel leaders. About 93 percent of federal defendants charged with drug trafficking hail from the lower or middle tiers of criminal organizations—40 percent of whom are street-level dealers, couriers and other underlings.

The link between falling crime rates and longer prison sentences is not nearly as clear-cut as Guthrie suggests. The 17 states that reduced incarceration levels over the last decade also saw declining crime rates. In addition, New York City has experienced an above-average reduction in crime in the last 20 years while simultaneously reducing incarceration rates.

NAAUSA’s letter to Holder defends the fairness of mandatory minimums by enumerating the ways in which defendants can avoid the harshest of sentences through plea bargains and the “safety valve,” a loophole that allows judges some discretion in reducing sentences for some first-time drug offenders. But the safety valve is only applicable to 1 in 5 federal defendants (though it may be expanded under the NAAUSA-opposed Smarter Sentencing Act).

Of the defenses of mandatory minimums offered by Guthrie and the NAAUSA, the only one that holds any water is that the current system provides prosecutors with leverage in getting defendants to cooperate.

But, according to a 2013 Human Rights Watch report, that “leverage” amounts to prosecutorial coercion. The report found that prosecutors routinely use the specter of mandatory minimum sentences to coerce defendants into cooperating with investigations and pleading guilty without a trial. A mere 3 percent of federal defendants dare risk trial, and it is easy to see why. Federal drug offenders convicted by trial receive sentences three times longer than those who take a plea bargain.

Plea bargains are widely seen as a necessary expediency to keep the justice system from becoming bogged down in trials. But what gets lost in all of this is due process. Plea bargains are supposed to be bargains for guilty defendants who cooperate, but with minimum punishments that so clearly fail to fit crimes, defendants who maintain their innocence are subjected to a harsh trial penalty. Without the right to a trial in which a judge may exercise their traditional power of tailoring sentences to fit crimes, defendants are effectively denied their right to due process.

Federal prosecutors are likely to continue resisting reforms that would strip them of powers that should be beyond their remit. We would do well to ignore them. In a justice system that is actually just, sentences should fit crimes, not strong-arm defendants into admissions of guilt.