Judge Blames the Press for Telling the Truth About Muslim Surveillance 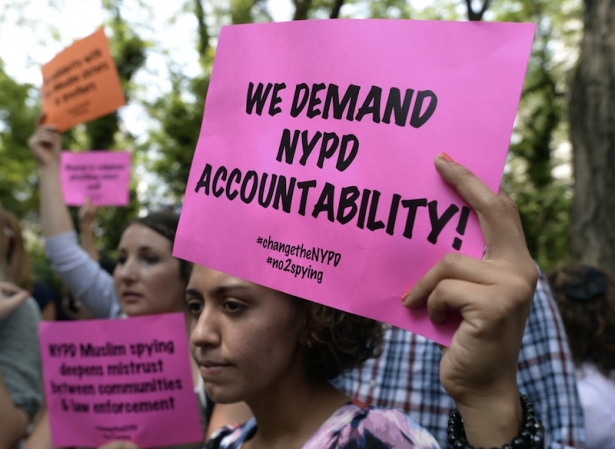 Many Muslims in the New York City area reacted with anger and fear when news broke of the NYPD's surveillance program. (Timothy Clary/AFP/Getty Images)

Like many other college students around the country, Soofia Tahir was an active member of a student organization while attending Rutgers University in New Brunswick, N.J. But unlike most college students, as a member of Rutgers’ Muslim Students Association (MSA) from 2004 to 2008, Tahir and the rest of her group were being carefully monitored by a secret unit of the New York Police Department (NYPD) for at least three years. In 2012, students from MSA groups all over the New York area—and even a few from elsewhere in the Northeast—discovered thanks to an Associated Press story that the NYPD had targeted them as part of a broader covert spying program aimed at identifying terrorist threats.

On June 6, 2012, Tahir and ten other Muslim residents of New Jersey filed the first lawsuit against the city of New York for its Muslim surveillance program. With assistance from Muslim Advocates and the Center for Constitutional Rights, the group alleged in Hassan v. City of New York that the NYPD had illegally used ethnicity and Muslim religious identity to determine law enforcement targets. They contended that the subsequent surveillance negatively affected their careers, businesses and religious practices.

In response to the suit, the City of New York filed a motion for dismissal in December 2012. And on Feb. 20, 2014, the U.S. District Court judge granted the city’s motion and dismissed the case, placing the blame for any negative consequences of surveillance on the journalists who had uncovered the program in the first place.

In a 2011 exposé, the AP revealed that beginning in 2002, the NYPD had used its “Demographics Unit” to conduct extensive surveillance on the New York City area’s Muslim communities.

Over the course of nearly a decade, classified documents showed, the Demographics Unit took photographs and video recordings at mosques and paid informants to infiltrate student organizations such as the MSA. The unit also created detailed maps showing the ethnic background of residents and the locations of Muslim businesses in the New York City area. According to court documents, the NYPD focused most of its initiatives specifically on New Jersey.

Despite the NYPD’s insistence that these strategies were necessary to detect terrorist threats, years of surveillance failed to yield any leads in terror cases. Instead, as the plaintiffs in Hassan v. City of New York pointed out, the program only served to heighten feelings of intimidation and fear among the Muslim community.

These plaintiffs included the Council of Imams of New Jersey, the Muslim Students Association of the United States and Canada, several business owners, and a teacher at a Muslim elementary school. Syed Farhaj Hassan, the lead plaintiff, served for 14 months in Iraq and is now a soldier in a Civil Affairs Brigade. According to case documents, Hassan regularly attended several mosques on the NYPD’s watch list. After learning that his mosques were under surveillance, he lessened his attendance out of the fear that his association with a law enforcement target would affect his military security clearance and cause other soldiers to distrust him.

Despite the violations cited by Hassan and others, U.S. District Judge William J. Martini, a former Republican Congressman who was appointed to the court by President George W. Bush, argued that they presented insufficient evidence to prove that the NYPD had violated their constitutional rights. He concluded that the NYPD had a legitimate, nondiscriminatory reason to monitor the Muslim community: “The police could not have monitored New Jersey for Muslim terrorist activities without monitoring the Muslim community itself.”

Civil liberties advocates have condemned the decision. “It sanctions the widest form of racial profiling that I’ve seen in a District Court opinion in a long time,” Baher Azmy, the legal director at the Center for Constitutional Rights, told press following the decision.

In his opinion on the case, Martini did not actually deny that the plaintiffs suffered damages from surveillance. However, he does not blame the NYPD for those damages. Rather, Martini argued that any injuries caused to the plaintiffs resulted from “independent action of a third party”—namely, the Associated Press. He explained, “None of the Plaintiffs’ injuries arose until after the Associated Press released unredacted [sic], confidential NYPD documents and articles expressing its own interpretation of those documents.”

Martini wrote that the responsibility for damages lay with the AP for exposing the surveillance, not with the police department actually conducting it. By that logic, informants infiltrating mosques did not cause fewer people to attend. Instead, the AP’s stories, which revealed that informants infiltrated mosques, caused fewer people to attend. Thus, Martini deemed, the NYPD was not liable for these consequences.

Media advocates find Martini’s logic suspect. “It’s outrageous that the judge would say something like this,” says Trevor Timm, executive director of the Freedom of the Press Foundation, an organization that supports public-interest journalism. “The damage to people’s civil liberties does not depend on whether they know about it. Oftentimes with surveillance, people don’t find out until months or years later, and that doesn’t mean it’s any less damaging to them.”

This isn’t the first time the government has tried to shift the responsibility of its own bad press to the media itself. Since 9/11, Executive Branch officials have frequently attempted to silence reporters who break stories about national security, with the FBI even claiming that a reporter could be considered a “co-conspirator”—and a felon—under the Espionage Act.

Timm notes, however, that it is unusual to see a judge take similar action. He hopes that Martini’s dismissal based on the AP’s disclosure will be an aberration and that the appeals court will overturn the decision or at the very least, “Acknowledge that reporters reporting on [surveillance] is not a problem; in fact it’s part of their first amendment rights.”

Glenn Katon, legal director of Muslim Advocates, agrees, calling the district court’s reasoning “fundamentally flawed.” He believes the concept of an intervening third party is irrelevant to the case, especially because that party was a journalist. “In the history of American journalism, there has never been a time when the wrongdoer has been let off the hook because the wrongdoing was exposed by a journalist,” says Katon, who is optimistic that the appellate court will reject Martini’s logic.

Muslim Advocates is currently preparing its briefs for the appeals court. If the appellate judges reject Martini’s decision, the case will go to a trial court. From there, the court will decide if the plaintiffs have successfully proven that the NYPD violated their constitutional rights.

In the meantime, Muslims in the tri-state area supposedly no longer have to fear covert spying by the NYPD. On April 15, the department announced that the Demographics Unit, now called the Zone Assessment Unit, has been disbanded; in its place, officers will gather relevant information through direct engagement with the community. Some residents are calling for assurances that other parts of the NYPD will not spy on Muslims, but others see this decision as a positive step away from secretive and invasive tactics.

Katon says Hassan v. City of New York will continue, however. The plaintiffs’ goal, he says, is not to disband the specific program; rather, it’s to stop what they see as unconstitutional spying based on religion elsewhere in the state or country. Though the trial court’s decision will only have legal authority over states in the Third Circuit, it would set a significant precedent for cities across the United States that may also be conducting surveillance on Muslim communities.

“We’re going to press forward until it’s clear that the problematic practices have stopped and not just until the unit is dismantled,” Katon tells In These Times. “That’s what the case is about.”