How Can We Achieve Sustainability?: First We Have to Anticipate the Future 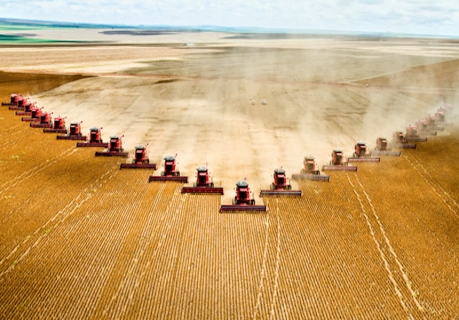 Sustainability is about maintaining something—about keeping something going—indefinitely into the future. History does not give humans very high marks for our ability to predict, let alone control, the future. Our best bet for achieving sustainability probably is rooted in our efforts to anticipate changes and prepare for them in advance. How we are positioning ourselves, especially with respect to food and agricultural sustainability, provides us with ample material for interesting debates.

Paul Krugman made a provocative observation in a column published July 1, 2012 in the New York Times (Krugman 2012). He said that in 1910 Norman Angell argued quite persuasively in a popular book, The Great Illusion, that wars were obsolete since the cost of military conquest no longer could be justified given that trade and industry, (not the subjugation of people), had become key to national wealth. Simply counting the number of wars we have waged since 1910 shows us how that turned out!  More importantly, we seem to have turned wars into a type of disaster capitalism in which we justify military spending as a means of “stimulating the economy.”

As we anticipate changes in our future food and agriculture systems, we may confront similar delusions. For example, we know that most of our natural resources are in a state of decline. Fossil energy, which powers every aspect of our food system from seed to chemicals, fertilizer, mechanization, processing and transportation, is being depleted. The same is true for minerals, especially rock phosphate and potash that are inputs for our current industrial food system, and iron ore and copper metals that are essential for mechanization. We also are using more than 70 percent of the planet’s freshwater resources for agricultural irrigation. Some predict that the Ogallala aquifer will be depleted in another 20 years (Hylton 2012). Add the projected reduction in yields due to increased frequency of severe weather events as a result of climate change, and the prospects for “maintaining” productivity of our current industrial food system are dim (Lobell et al 2011).

How should we proceed?

One option is to persist with our demonstrated capacity to use destructive capitalism to achieve short-term economic gains. Michael Klare imagines a chilling scenario in his book, The Race for What’s Left. He paints a plausible picture of a future in which we will increasingly engage in violent geopolitical scuffles to lay claim to the world’s last resources. Given that many nations already are positioning themselves to engage in such conflicts, it is not hard to imagine going down this foreboding path.

Klare proposes that we can adapt to the new world only “through a complete transformation of industrial society” and that it is critical to begin with food and agriculture. While we all probably can manage without a lot of industrial technology, we cannot survive without food and water.

Such a transition appears reasonable, bringing us back to Angell’s proposition in 1910. Using his logic, we could argue that given the imminent depletion of our natural resources, the industrial economy will become obsolete. Hence, a complete transformation of industrial society will occur naturally.

So what would be the next steps?

First, those involved in food and agriculture need to engage in conversations. Given our future world, can simply intensifying what has worked in the past sustain us? If not, what are the alternatives?

Second, let’s reacquaint ourselves with wisdom embedded in the writings of Sir Albert Howard, Aldo Leopold and Liberty Hyde Bailey, as well as some non-western cultures (National Geographic 2012). These luminaries saw the wrongheadedness in industrializing agriculture, and they proposed alternatives. We might marry that wisdom with the emerging science of ecology and evolutionary biology to create a transformed agriculture for the future.

Third, we only can accomplish this task through global cooperation and sharing, not through a race for what’s left.

Fourth, we need to become more explicit about what the market economy does in our current industrial society and what it creatively could do. We might look to inventive economists like Michael Porter and Mark Kramer who have proposed a new business model based on what they have called “Creating Shared Value” (Porter et al 2011). Economies based on partnership and cooperation likely will serve us better during this transition than economies based solely on competition and domination.

The good news is that already numerous “beacons” point to a revamped food and agriculture system, and a new generation of young farmers are eager to participate. This new food system celebrates the intersection of biological, cultural and economic diversity, potentially increasing the resilience of natural, social and economic systems. It is based mostly on self-renewing and self-regulating, adaptive systems designed to mimic nature, rather than systems that rely on energy-intensive external inputs that dominate nature.  The “beacons,” featured in numerous United Nation studies published in the last decade, include innovations in perennialization, permaculture, agroforestry and diversified crop/livestock systems.

It is important to remember that transformations never take place overnight. Change happens in a series of successions in which we sort out what works in each landscape. Almost certainly, restoring the biological health of our soils and the biological and genetic diversity of our plants and animals will be foundational to such a transformation.

We all certainly can benefit from a new ethical culture in our communities based on what Aldo Leopold called an “ecological conscience.”

A version of this article was originally published by the Leopold Center for Sustainable Agriculture.