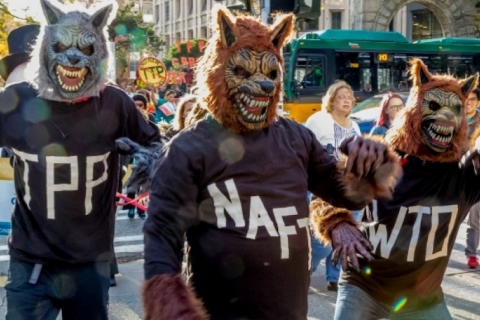 On Sunday, officials from the United States, Mexico and Canada wrapped up the first round of talks regarding the “modernization” of the North American Free Trade Agreement (NAFTA)—the economic treaty inked in 1994 that, depending on who you ask, either “lays the foundation for economic growth and prosperity for all North Americans” or has, in fact, exploited workers in all three countries, suppressed wages and outsourced environmental destruction.

President Trump, a vocal critic of NAFTA economics on the campaign trail, made no mention of the talks last week, but the Institute for Agriculture and Trade Policy (IATP)—an alliance that “works locally and globally at the intersection of policy and practice to ensure fair and sustainable food, farm and trade systems”—did.

IATP criticized government officials' refusal to allow input from the actual farmers any new deal will affect and maintained that the direction of the talks continues to favor multinational corporations instead of working people—not unlike the supposedly "dead" Trans-Pacific Partnership (TPP).

In an Aug. 16 press release, the Minneapolis-based group released the following statement:

As the formal talks to renegotiate NAFTA begin in Washington, D.C., this week, family farm organizations from Canada, the United States and Mexico denounce the direction of the talks. Despite repeated demands by civil society organizations in all three countries, the governments have refused to open the talks to the public or to publish proposed negotiating texts. All signs point to negotiations designed to increase agribusiness exports and corporate control over the food system rather than to support fair and sustainable trade and farming systems.

The Trump administration has stated its clear intention to continue its trend of putting multinational corporations’ narrow interests first by using the same blueprint that shaped the failed Trans-Pacific Partnership (TPP). A review of submissions on the talks includes proposals to dismantle Canada’s successful dairy supply management program and eliminate restrictions on trade in GMOs and other agricultural biotechnology.

“Under NAFTA and its forerunner, the Canada-US FTA, farm input costs have gone up and inflation-adjusted commodity prices have dropped, yet the farmer’s share of the grocery dollar is smaller. We export more, but imports have increased faster, which means our share of our own domestic market is actually shrinking,” said Jan Slomp, President of Canada’s National Farmers Union. “NAFTA and the FTA have not helped farmers. Since 1988 we have seen one in every five of our farms disappear and we’ve lost over 70 percent of our young farmers, even though Canada’s population has increased.”

“The United States cannot solve its dairy crisis by taking over the Canadian dairy market and putting our farmers out of business,” said Slomp. “We need Canada to stand firm against any temptation to negotiate away supply management. Our system ensures farmers are paid the cost of production, processing plants are able to run at full capacity and consumers have a reliable, wholesome and affordable supply of dairy, poultry and eggs—all without any government subsidies.”

Jim Goodman, a Wisconsin dairy farmer and member of the National Family Farm Coalition [and Rural America In These Times contributor], agreed. “Federal and State Governments and Land Grant Universities, at the behest of the dairy industry, have done all they can to encourage U.S. dairy farmers to produce more milk, never questioning how much milk might be too much or how the subsequent cheap prices affect farmers. We cannot expect Canada, at the expense of their dairy farmers, to bail us out. Farmers­­—whether U.S. or Canadian—are nothing more than parts of the machine to the industry and NAFTA. That's the way free trade works.”

Ben Burkett, National Family Farm Coalition board president and Mississippi farmer, noted that simply increasing exports will not replace ​the need for ​ fair prices. “U.S. family farmers and ranchers have demanded that the administration restores Country of Origin Labeling (COOL) for meat, which would provide more accurate information to consumers while improving our access to markets.”

Mexican family farmers, who have been devastated by NAFTA’s existing provisions that flooded their markets with cheap grains, will join thousands of labor, environmental and other activists in Mexico City tomorrow to denounce the talks and demand a completely different approach based on complementarity and cooperation. On agriculture, they insist that, “Mexico must guarantee food sovereignty and security and exclude basic grains, especially corn. Transgenic crops should be excluded and the ability of national states to promote sustainable agriculture intact. Likewise, Mexico must maintain its adhesion the UPOV [International Union for the Protection of New Varieties of Plants] Act of 1978 and to reject the commitment to accede to the UPOV Act 1991, as it was intended in the TPP.”

Victor Suarez, Executive Director of the Mexican National Association of Rural Producers (ANEC) added, “This whole process should begin with a thorough, independent evaluation of NAFTA's economic, social, environmental and governance impacts. The goal should be to restore national sovereignty over food and farm policy, and to support local farming communities.”

“For many years, Rural Coalition has advocated for a ‘people-to-peoples NAFTA’ linking rural communities in all three countries to collaborate to improve their local economies and food sovereignty. A renegotiation of NAFTA that further helps transnational corporations while diminishing community self-determination will only hasten rural economic collapse—exactly the wrong way to go,” said John Zippert, Rural Coalition Chairperson and longtime Federation of Southern Cooperatives staff member in Alabama.

“NAFTA has woven our economies together in ways that hurt family farmers, workers and our environments,” said Karen Hansen-Kuhn, Director of International Strategies at the Institute for Agriculture and Trade Policy. “We need a new approach to trade that promotes local and regional food systems, including providing for mechanisms in all three countries to shelter food crops from volatile markets and dumping. Simplistic calls to expand exports won’t get us to the fair and sustainable food and farm system we need.”

The next round of trade talks is scheduled for early September.

(For more information visit: “NAFTA Renegotiation: What's at stake for food, farmers and the land?” You can also view a collection of 25 years’ worth of related research in a NAFTA portal by clicking here.)