Foreign Control of U.S. Farmland has Recently Doubled, And the USDA Doesn’t Know Who Owns What 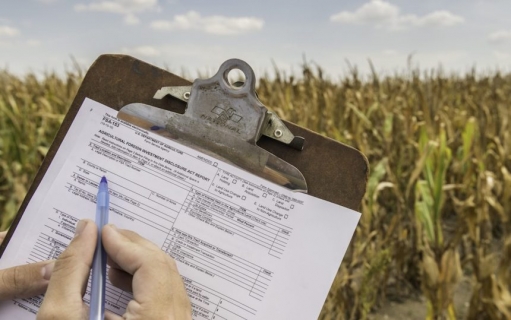 Foreign investors currently control 27.3 million acres of farmland in the United States. They are required by law to fill out an FSA-153 form with the USDA, but the Midwest Center for Investigative Reporting has discovered that much of the Department's data is out of date, incomplete or inaccurate.   (Image: Darrell Hoemann / Midwest Center for Investigative Reporting)

A law requiring foreign investors to report transactions of farmland to the U.S. Department of Agriculture (USDA) has been on the books for almost 40 years. But as the amount of foreign-controlled farmland doubled in millions of acres between 2004 and 2014, the USDA has lapsed in enforcing the law, a review of USDA documents has found.

The land, roughly the size of Tennessee, is worth $42.7 billion.

But, since 2011, the USDA has only assessed 10 fines under the law, worth $115,724, according to records obtained by the Midwest Center for Investigative Reporting through the Freedom of Information Act. And no fines were assessed in 2015, 2016 or so far in 2017.

Lesa Johnson, the manager of the USDA program, acknowledged her office does not review the filings for completeness or accuracy. She said her office also does not investigate to see if companies with foreign ownership file these forms because of a lack of staff and resources. Even before the recent downturn in enforcement, the USDA only assessed 187 penalties between 2004 and 2010, valued above $667,000. But the largest fine of $111,266 during that time, which made up a sixth of the total, was the result of a company self-reporting its lack of compliance with the law.

“We really can’t go after anyone,” Johnson said. “We don’t know it’s late until they call and put in a form past 90 days.”

Under the act, every foreign person or entity that acquires at least 10 percent interest in agricultural land must file what is known as an FSA-153 form. Agricultural land is defined as a parcel of land at least 10 acres in size or that could produce $1,000 in revenue from agricultural activities. The form requires disclosure about a broad number of things, including how the project is financed, who the owner is and where the owner is from. Penalties for not filing within 90 days can be as severe as a fine of up to 25 percent of the fair market value of the land.

Senators Chuck Grassley (R-Iowa) and Debbie Stabenow (D-Michigan) have sponsored the Food Security is National Security Act of 2017 that would strengthen the monitoring of foreign investment. The act would give food and agriculture officials a permanent role on the federal committee in charge of reviewing foreign investment in the United States.

No progress has been made on the new act, but Grassley told the Midwest Center for Investigative Reporting through spokeswoman Jill Gerber that the “USDA should enforce the Agriculture Foreign Investment Disclosure Act.”

He said the USDA should make sure the ownership information is clear and up to date.

“Transparency adds value wherever it occurs, and analyzing trends in land ownership is helpful to understanding the current state of American agriculture. And on principle, agencies should enforce the laws on the books or ask for legislative updates if the laws are obsolete,” Grassley said. “Good government depends on good laws and the faithful execution of them.”

A separate USDA database on foreign investment in farmland reviewed by the Midwest Center showed that 27.3 million acres of agricultural land in the United States are controlled—either owned or under a long-term lease agreement—by foreign investors. The land, roughly the size of Tennessee, is worth $42.7 billion. But many of those records are incomplete and inaccurate. For example, about one million acres of land have no information about which country the owner is from. About 300,000 acres also do not list who the owner is. And typos within the data can be misleading about the true value.

In addition, spot checks by the Midwest Center of the data show that many parcels of land are no longer controlled by the owner listed in the database. Furthermore, it is difficult to determine who owns many limited liability companies or how many companies are owned by foreign investors in whole or in part.

Because the USDA has little capability to review filings of foreign investors, the result is that the USDA relies on companies to report errors.

For example, in 2010, a team of attorneys at Atlanta law firm Morris, Manning & Martin realized they had failed to file a $98.9 million purchase of 55,000 acres of Alabama, Mississippi and Tennessee timberland. The firms’ corporate and realty teams had miscommunicated, and no one had filed the FSA-153 form with the federal government, according to Rebecca Vandiver, then an attorney at the firm.

Records show the form was required because their client, RMK Select Timberland Investment Fund I, LLC, a timber investment management organization, had ownership interest from Denmark. Vandiver said she anonymously called the federal government about the lapse, and a USDA official explained how to file and what the fine for the late filing would be.

Morris, Manning & Martin decided to voluntarily file late, which would result in an $111,266 fine, covered by malpractice insurance, rather than be in noncompliance. But Vandiver said that it didn’t appear the federal government would have ever known the fund was in noncompliance if the firm hadn’t self-reported. And records and comments from the USDA confirm her perception.

The fine for RMK Select Timberland Investment Fund I, LLC, was the largest fine since at least 2004, enforcement records show. Vandiver, who also represented two other funds that were fined about $95,000 at the same time, called the penalties “draconian.”

“The government seemed to be treating this as a simple filing, so the fine was disproportionately high for missing a filing,” Vandiver said.

Vandiver, who represented many different real estate investment firms including foreign firms, said that corporate structures can often make it difficult to find out who the owner is.

“With a lot of these LLCs, finding out who the investors are would not be easy, to be honest,” Vandiver said.

Because of that difficulty, getting around the filing requirement—either by negligence or intention—would not be that hard, Vandiver said.

“If people aren’t doing the filings, the government isn’t looking into this like they should be,” Vandiver said.

Waiting for the owners

“It’s all based on the person coming to us,” Johnson said. “We have no way of knowing if there is someone who is supposed to file, and they aren’t. We don’t have people out there looking.”

Penalties for late filings are only applicable to fee interest ownership, or outright ownership by the foreign entity. But from 2004 to 2014, about 5.1 million was leased by foreign entities, largely foreign renewable energy companies, who lease the land for wind and solar farms. This land is valued at $8.5 billion.

Johnson said one reason the USDA has not enforced this law is because there is no penalty for late filings for the companies who lease land and who now make up such a significant portion of the growth in foreign investment. Johnson also said the downturn in enforcement is due to more people having knowledge of the law.

“People are filing on time and in completion,” Johnson said. “I think the word is getting out that you’re supposed to file within 90 days.”

The USDA has its county offices publish the act’s requirements a few times per year in their newsletters, Johnson said. Overall, the USDA has 4,500 locations. They also ask county clerks and local realtors to share the information. Most FSA-153 forms are filed with county offices and then forwarded to the USDA in Washington, though many companies with a large number of acquisitions file directly with Washington, Johnson said.

Johnson said issues with the database could be because of issues merging the data, which is stored both in Kansas City and Washington D.C. However, she said that much of the complete data could result from complex ownership structures.

The USDA may not know who the foreign owner is or what country they’re from because the FSA-153 form is limited to three tiers of ownership.

“I’m sure there are some that slip through the cracks,” Johnson said.

Foreign investment in agricultural land has been an area of concern for the past few years. In 2013, Chinese firm Shuanghui purchased U.S. pork producer Smithfield Foods for a record $4.7 billion. And this year, ChemChina, China’s state-owned chemical company, purchased Swiss agribusiness company Syngenta, one of the largest seed and crop protection companies in the world. German company Bayer is also in the process of purchasing St. Louis-based Monsanto.

In an August policy brief, the Organization for Competitive Markets (OCM), a nonprofit organization focusing on antitrust and trade policy in agriculture, called for adoption of the legislation, as well as better enforcement of AFIDA. “We believe foreign ownership is a national security issue and a food security issue,” said Joe Maxwell, the executive director of OCM.

“We see more and more money being dumped into this sector, and it puts farmers and ranchers at an unfair competitive disadvantage. It locks out farmers, and it locks out rural communities.”

Maxwell said that foreign investment in agriculture land artificially drives up the value of land above production value, driving farmers out of the market. Maxwell, the former lieutenant governor of Missouri, said the AFIDA database is helpful but it’s hard to make good policies when there are so many problems with the data collected. “It’s hard to find the data,” Maxwell said.

This story was originally published by the The Midwest Center for Investigative Reporting and is reposted on Rural America In These Times with permission. The Midwest Center for Investigative Reporting is a nonprofit, online newsroom offering investigative and enterprise coverage of agribusiness, Big Ag and related issues through data analysis, visualizations, in-depth reports and interactive web tools. Visit them online at www.investigatemidwest.org.