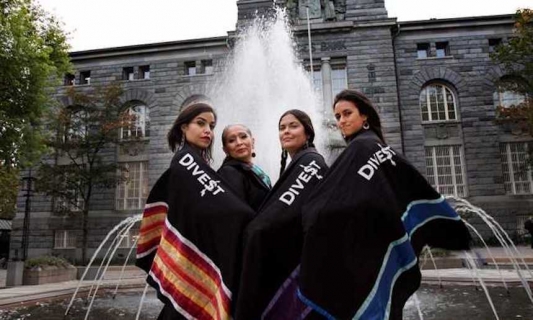 Last December, calls to defund the Dakota Access pipeline and “Stand with Standing Rock” led individuals to divest millions of dollars from banks extending credit to that project. As cities and tribes got involved, that amount increased to now more than $4 billion.

Seattle was the first, then more cities followed, and the movement to defund Big Oil is still growing. In May, Indigenous leaders launched a new campaign, the Treaty Alliance Against Tar Sands Expansion, targeting four proposed tar sands pipelines. The strategy is to stop banks’ financial commitment before ground is broken. One of these projects—TransCanada’s Energy East Pipeline—was terminated earlier this month.

Now, the movement that began at Standing Rock has gone global, since much of the DAPL funding came from overseas banks. Some European banks such as BNP Paribas have taken steps to stop funding fossil fuel projects that trample Native peoples’ rights. Others such as Norway’s DNB and ING have done some divesting.

Last week, a delegation of Indigenous women returned from a trip to Europe where they met with leaders of financial institutions in Norway, Switzerland, and Germany, the “home bases for several of the world’s largest financial and insurance institutions supporting dangerous extraction developments,” according to the news release. The delegation was organized by Indigenous women leaders in partnership with the Women’s Earth and Climate Action Network.

Jackie Fielder, who is Mnicoujou Lakota and Mandan-Hidatsa, was a member of that women’s delegation. Fielder is an enrolled member of the Three Affiliated Tribes and a campaign coordinator of Lakota People’s Law Project as well as an organizer with Mazaska Talks. Others in the delegation included LaDonna Brave Bull Allard, Michelle Cook, and Tara Houska.

In this interview, Fielder talks about divestment, the delegation’s trip to Europe, and what’s next for the movement to defund fossil fuel projects that threaten Indigenous peoples. The interview has been lightly edited for clarity and length.

Shannan Stoll: One thing connecting the delegation of women that went to Europe was that you were all involved in the Standing Rock movement. Could you tell me about your involvement with Standing Rock and the divestment movement?

I got involved because I am the result of what happens when you protect water—my grandparents grew up along the Missouri River—and I have had a passion for following the money when it comes to injustices like these.

At the end of DAPL, I was trying to find a way to get involved or support the movement from afar. I was in San Francisco at the time of the camp and was really committed to my work in the Bay Area and didn’t want to tear away from it.

In late January, I saw Seattle commit to moving its money away from Wells Fargo. This was a result of Indigenous-led ground actions and a four-month-long pressure campaign led by Matt Remle and Rachel Heaton, who are the co-founders of Mazaska Talks. I was inspired by [their] work, and I said “this has to happen in San Francisco.” Over the course of a month I started a campaign and made a Facebook page called San Francisco Defund DAPL Coalition. … We wanted to put San Francisco’s money where their solidarity was. … We got a resolution on the table [of the city council], and it passed unanimously.

How has the divestment movement grown since Standing Rock? Is divestment working?

Yes. Since Standing Rock, more than a dozen cities have taken some form of action to move their money out of Wall Street. These include Los Angeles, San Francisco, Seattle, Eugene, Missoula, Santa Fe, Denver, Colorado Springs, Minneapolis, Chicago, D.C., Charlotte, and others.

We know divestment is working because Energy Transfer sued our partner Greenpeace, and other partners, … and their SLAPP [strategic lawsuit against public participation] suit included a quote that says:

The damage to our relationships with the capital markets has been substantial, impairing access to financing and increasing their cost of capital and ability to fund future projects.

What was the purpose of this trip?

The purpose was to demand European banks divest from fossil fuel companies that violate Indigenous peoples’ right to Free, Prior, and Informed Consent, as outlined in the United Nations declaration of the rights of Indigenous peoples.

We met with [major banks] and asked them to exclude Energy Transfer, Enbridge, Kinder Morgan, and other fossil fuel companies that have violated Indigenous peoples’ rights to deny or grant permission for projects on their territories and that fund tar sands pipeline expansion.

Why was it important that women in particular carry this message to Europe?

I think because Unci Maka, Grandmother Earth, is feminine. Indigenous women have been the backbone of this particular resistance movement, but also in general, of tiospaye, family units, in Lakota nations. And Indigenous women—as well as [being] traditionally the backbone of their families, they often are the ones to call out injustice when they see it immediately. We saw that at Standing Rock. LaDonna has a story in which she describes how there were bulldozers going over the sacred burial sites, and the men were just so in shock that they didn't know what to do. And LaDonna said, “Well push [the men] out of the way and tell the women to stop it.” And that's what happened. Women got arrested: doctors, mothers, sisters. They are a force to reckon with. And I think that's why we were meant to carry this particular message to Europe.

The specific places you traveled were Norway, Switzerland, and Germany. Why were those the targets?

These European nations and their institutions have some of the world’s highest standards for Indigenous rights, creating an opening for delegates to call for firm action by banks and investors of these nations to uphold high standards and become an international model for justice and accountability.

What did you learn from the trip?

We got to understand how European, specifically Norwegian, Swiss, and German, people think about Indigenous people, environmentalism, and their relationships to banks. For example, Norway is lauded as the prime example of a green, progressive country. However, there is a $1 trillion oil fund behind the economic and social equality over there. And the Swiss bank, they manage money from sketchy leaders. You know, they held Nazi money. They're a really good example of showing how neutrality in instances of injustice helps oppressors maintain their hold on oppressed people.

With respect to Germany, there is a lot of potential for people to hold their banks accountable. For example, Deutsche Bank is one of, if not the biggest, financers of the companies behind the tar sands pipelines that we're focused on. And they were really interested to hear what we had to say.

But they are—like many of the banks—really hesitant to do anything radical, which in their world means stepping away from fossil fuels. And that’s not what we’re asking. BNP Paribas just set a standard while we were there—right before Tara was going to meet with them—that they would stop financing tar sands, Arctic drilling, and fracking. That sends a message to the rest of the banks that it is possible to stop funding destruction and climate change. This also follows other banks that pulled out of the Dakota Access pipeline funding.

I think that Europe is ready—because at this point the United States is not going to do this with the current administration. Europe is ready to lead the world, if they want to, in a green path and one that upholds Indigenous peoples’ rights and human rights.

What’s next for the divestment movement?

According to LaDonna, there are more than 200 camps around the world. We have fossil fuel and desecration projects around the world, and there are big financers behind these projects. The next thing for the divestment movement is to keep growing. … We are going to continue building our alliances across the world and we're going to bring this specific divestment movement that is Indigenous led to a level we haven't seen since South African apartheid.

Mazaska Talks has been organizing a Divest the Globe campaign. What are you asking people to do?

On October 23 and 24 and 25, 92 banks that belong to the Equator Principles Association are meeting in Sao Paulo, Brazil, to discuss Indigenous peoples’ right to “free, prior, and informed consent.” Starting on Monday, we are calling for three days of action around the world that makes the connection between banks and desecration projects, whether that's the tar sands pipelines and the banks that finance those, a deforestation project, coal mines, or a local refinery. We want to raise the public's awareness and to raise the banks’ awareness that we are well aware of who is financing these projects, and —whether it's a sit-in, vigil, nonviolent direct action, art space, or teach-in—we want people to meet the community where it’s at and educate one another about the relationship between these banks and these fossil fuel projects.

Why the focus on making the campaign global?

The financing of fossil fuels over green power is a global issue. The events at Standing Rock opened the world's eyes to the system that we're operating under. Indigenous peoples are the canaries in the coal mine. There are companies that are willingly financing the destruction of our planet—not just Standing Rock’s only source of water. This has always been much bigger than just a single tribe or single people.

I am excited to see people realize that this is going to happen to everyone at some point. Whether that's in a week, as is happening with these hurricanes and fires and natural disasters, or whether it's going to happen to their grandchildren who will have to live on a planet that is two degrees hotter and with freshwater as scarce as it [will be]. I'm excited to work with people on solutions that honor our role as stewards to the Earth and our duty to provide a cleaner, less violent, and cooler planet to the next seven generations.

These banks are only making decisions on a quarterly basis. They're not making their projections based on the next seven generations. That's why they're happily financing these projects that are so short-sighted and not even economically viable.

Divestment is a way to obtain accountability and do it in a way that also invests in our future. When we take our money out of Wall Street, we put it into community banks, into green banks, into credit unions that … fund growth in the community.

Divestment is not the only tactic that we, as Indigenous people or just people who care about the planet, need to use. But it is certainly going to be the engine behind the just transition from fossil fuels to green energy.

("Why Native American Women Are Going After Europe’s Banks to Divest From Big Oil" was originally published by Yes! Magazine and is reposted on Rural America In These Times in accordance with their sharing policy.)

Shannan Stoll wrote this article for YES! Magazine. Shannan is a senior editor at YES! She covers environmental justice and Native rights issues.