Why Didn’t We Listen to this Guy?: Bernie Sanders on the GOP Tax Plan and Global Oligarchy 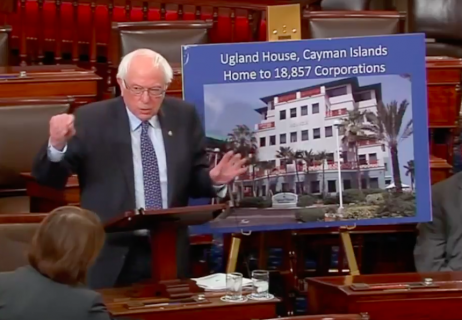 In a more reasonable world, the American people wouldn’t need Sen. Bernie Sanders (I-Vt.) to travel around the country explaining all of the ways this GOP tax proposal is just another poorly-disguised, donor-funded, corporate charade in which half of Congress is attempting to sell us the same trickle-down deception we’ve already endured for decades—it would be obvious. We are, however, not there yet.

So, in a speech delivered earlier this month (and one of many in recent weeks) Sanders continued his ongoing effort to inform all Americans—“whether one is a progressive, a Democrat, a conservative, a Republican or something in between”—about some very twisted, rapidly-worsening financial realities.

But his speech is also about more than the absurdity of our tax code and partisan dysfunction. It lays out how the same few entities—a handful of tremendously rich individuals, institutions and corporations—are using their consolidated power to manipulate not only in the United States, but around the world.

“One of the great crises that we face,” says Sanders, “is that a handful of billionaires are moving this entire planet toward an oligarchic society in which the people on top not only have incredible wealth, but incredible political power as well.”

He cites the recently released Paradise Papers: Secrets of the Global Elite, a months-long investigation by the International Consortium of Investigative Journalists (ICIJ) that documents the magnitude of global tax evasion while implicating, among others, the Koch brothers, Sheldon Adelson, Carl Ichan and Robert Mercer; institutions such as Wells Fargo, Citigroup and Bank of America; corporations such as Apple, Nike and Exxon Mobile and, unsurprisingly, numerous big-shots in the Trump administration.

A few key takeaways from the ICIJ report:

Sanders points out that, as this administration "works overtime to make this absurd situation even worse at a time when corporations are making record-breaking profits,” one out of five major profitable corporations currently pay nothing in federal income tax.

Like he did on the 2016 campaign trail until the DNC brought out its giant hook, Sanders suggests that if these entities did pay their “fair share” of taxes, that money could be used to actually address many of the issues these same billionaires and companies drone on and on pretending to care about—veterans, infrastructure, health care, education, etc. Yet instead, by hoarding money overseas, they’re placing these burdens on a rapidly shrinking middle- and already squeezed working-class.

“This, needless to say, is an issue that does not get a whole lot of discussion,” says Sanders. “Because, in general, the more important the issues are, the less discussion they get within the corporate media or within the political world that we, in Congress, live in.”

Check out the video below, it’s only 12 minutes: