Rural America’s Population is Shrinking for the First Time Ever 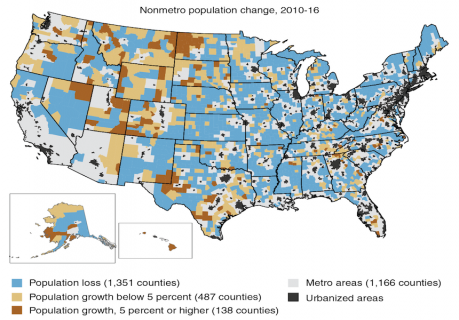 From 2010 to 2016, rural areas declined by nearly 200,000 people but the loss was not evenly distributed.   (Source: USDA Economic Research Service / Census Bureau)

Rural America at a Glance, 2017 Edition—the U.S. Department of Agriculture’s annual report on rural economic and population trends in the nation’s “nonmetro” areas—didn’t include too many surprises, but did find wide regional variation. It also confirmed (as we've reported) that rural America's overall population is in fact shrinking for the first time on record.

Key findings on the economic front:

According to the report, rural counties with economies based on tourism and recreation maintained higher-than-average population growth rates during 2010-16. However, over that same five year period, 1,351 rural counties lost population—totaling close to 800,000 people. In addition to an aging population, factors behind this decline include:

You can find a link to the full report (and a webinar presentation of its findings) below, but first here's a closer look at the numbers.

The number of people living in rural (nonmetro) counties declined by nearly 200,000 between 2010 and 2016, the first recorded period of rural population decline. Population loss for rural America as a whole has averaged just -0.07 percent per year in that span, but this loss has not been evenly distributed across all rural counties.

The number of nonmetro counties losing population reached an historic high of 1,351 during 2010-16, with a combined population loss of just under 790,000. Long-term population loss continued in counties dependent on agriculture, in the Great Plains, Midwest and southern Coastal Plains. New areas of population loss emerged throughout the eastern United States, especially in manufacturing-dependent regions.

The 487 rural counties with positive but below-average growth (less than the U.S. population growth rate of 5 percent) together added 281,000 people over 2010-16. Many are located in rural parts of the Mountain West, southern Appalachia, and other scenic areas where population growth slowed considerably for the first time in decades. Counties identified by ERS as having recreation-based economies grew by 4.6 percent during 2002-08 but only by 1.2 percent during 2010-16.

Most nonmetro population growth was concentrated in just 138 counties that grew by 5 percent or more during 2010-16, adding 317,000 people. Workers attracted to the oil and gas boom caused rapid growth in the northern Great Plains, western Texas/southeastern New Mexico, and south Texas. However, production cutbacks slowed population growth in these regions during 2015-16.

Most other high-growth counties during 2010-16 were counties in scenic areas that maintained higher-than-average growth despite the overall population slowdown in these types of areas. This first-ever period of overall nonmetro population loss may be short-lived. The cyclical economic downturn that began in 2007 bottomed out in 2012, and increasing population growth since 2012 coincides with renewed nonmetro employment growth. The latest population estimates show signs of a population recovery in many parts of rural America in 2015-16, especially in tourism and recreation destinations.

The uploader mispelled "edition" in the title, but there's some good data in here presented by John Cromartie, an author of the report. (Video: USDA / YouTube)

To check out Rural America at a Glance, 2017 Edition in its entirety, click here.