A Disturbing Peek Under the ‘Tilted Kilt’ 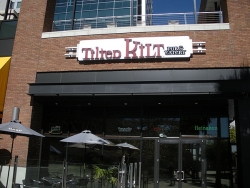 Another 'breastaurant' gets hit with another sexual harassment lawsuit

When I heard last week that 19 women had sued the Chicago franchise of a national chain called Tilted Kilt, known for its "scantily-clad kilt girls," I was not surprised.

I once visited the downtown faux-Irish pub and felt sorry for the young waitresses wearing ridiculous and uncomfortable-looking outfits, and the lone male customers who seemed to have nothing better to do than eat overpriced food and desperately seek attention from women who likely wouldn’t give them the time of day off the clock.

News of the lawsuit was gratifying, but reading the actual complaint was disturbing. The conditions alleged by the women at the restaurant do sound "outrageous" and "extreme" as the lawsuit says. But the most disconcerting revelation, for me, was the fact that the charges apparently deal almost excusively with the behavior of one manager described as a "predator." The manager, Dennis Sotos, allegedly habitually grabbed women’s breasts and buttocks, propositioned them, loudly discussed pornography, dropped ice down their skirts and, in at least one case, used a straw to shoot water down a woman’s dress saying, "I’m trying to get your panties wet."

If even a fraction of the allegations are true, Sotos and the franchise's two co-owners, Athan Sotos and Chris Tomaras, clearly deserve a sexual harassment lawsuit. But the narrow focus on one manager’s behavior leaves the impression that the general atmosphere at Tilted Kilt is otherwise legal and acceptable.

The existence of other Tilted Kilt franchises, countless Hooters restaurants and other chains like the Missouri-based "Show-Me's"—so-called "breastaurants"—indicate that such establishments have become an entrenched part of American culture. But it's jarring that the lawsuit doesn't mention the institutionalized highly sexualized climate and demeaning behavior from customers that must undoubtedly be a regular occurrence.

This is a chain that boasts on its main corporate website about the "girls" dressed in "scanty attire of short, plaid kilts that match the bra that peeks from under white camp shirts tied to show off their abs, capped off with white knee socks."

The site features an annual swimsuit calendar and countless photos of waitresses in the aforementioned attire…and brags about being "too risqué for an Illinois town"—in reference to an Evanston, Ill., location scrapped after 2,000 residents signed a petition opposing it.

Of course, all women have the right to work in a "risqué" workplace and to capitalize on looks or sexuality to make a living. But I see restaurants like Hooters and Tilted Kilt as offensive and exploitative because I guess that their waitresses’ wages, benefits and job security (or lack thereof) are little or no different than at most other restaurants.

In other words, the owners are taking advantage of and profiting from the objectification of these young women without fairly compensating them. There’s a good chance, like the vast majority of restaurant workers nationwide, they are working with few or no paid sick days and low wages that may or may not add up to a decent living once tips are figured in.

The reliance on tips to even make minimum wage is a problem for many restaurant employees—putting them at the whim of market fluctuations and unpredictable customers—but much more so at a place like the Tilted Kilt. where many tipping customers expect a sexual dynamic that would likely be considered a "hostile workplace" in most other professional settings.

The lawsuit alleges that women who complained were retaliated against with poor schedules, reduced hours and a lack of promotions. Before filing a sexual harassment lawsuit, workers are supposed to file a complaint with the Equal Employment Opportunity Commission (EEOC); allegedly, those who did so suffered ongoing retaliation at Tilted Kilt. Details of the alleged retaliation as described in the lawsuit show the kind of power imbalance that apparently existed at the restaurant:

After the charges were filed with the EEOC, a Tilted Kilt Chicago manager told Plaintiffs that they would never work in Chicago again because of the EEOC charges; that Plaintiffs would be required to move from Chicago because they filed the EEOC charges; that Mr. Tomaras (an owner of Titled Kilt Chicago) never loses; that Plaintiffs would never win their lawsuit; and that Mr. Tomaras uses $400 per hour lawyers who never lose.

If management made such statements to women who dared complain, it is hard not to guess that they were pressured to put up with behavior and advances from customers and managers that they might not have felt comfortable with.

There were a number of sexual harassment lawsuits filed against Hooters in the 1990s, and a compiled on a website lists five cases where Hooters settled sexual harrassment suits between 1999 and 2007. A 2006 suit against an Alabama Hooters—ultimately settled for $15,600 —hints at what might be a systematic culture at some of these establishments.

A male assistant manager, Jarman Gray, sued Hooters after he was fired allegedly for complaining on the behalf of female employees offended by a female visiting corporate Hooters trainer. The Smoking Gun website described the situation:

Gray claims that a trainer named Cat told waitresses that they were 'the ones with the pussies and you are in control because of that.' Then she reportedly added, 'If you need the extra money, go ahead and suck a dick or fuck a customer if the money is right.'