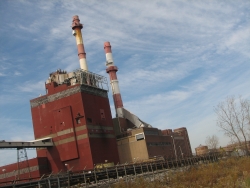 The State Line Power Station, perched on Lake Michigan at the edge of Indiana and Illinois, will close in March.   (Photo by Kari Lydersen)

State Line Power Station on the shore of Lake Michigan just across the Indiana border from Chicago was key to powering the once-legendary industries of Chicago, Gary and other Northwest Indiana towns.

The coal-fired plant, which opened in 1929, provided electricity for nearby steel mills, stock yards, refineries and countless other factories, businesses and residences. It also spurred commercial development as workers poured into local eateries and watering holes after their shifts.

The power plant also was central to the lives and careers of hundreds or even thousands of Chicago and Northwest Indiana residents over the years, including multiple generations of some families. But by the end of March the power plant will close, its Virginia-based parent company having decided that cheap natural gas and impending environmental regulations make it too expensive to run.

Now no one will notice the loss of electricity. There are plenty of other electricity sources to power the region, and State Line actually sells its electricity on a wholesale market that includes buyers as far east as New Jersey. But the closure will be devastating for many of the about 100 employees, about 80 of them members of the United Steelworkers Local 12502 and many of them with decades of service at the plant.

As things currently stand, the closure will be especially difficult for about 50 workers who turn 55 in the next few years. Workers who are 55 and older when the subsidiary that owns the plant closes can still buy affordable health insurance through the company Dominion.

The company had previously announced it would close by 2017; then it announced a closure by the end of 2014, which would have allowed most of these workers to continue their retirement plans. But the new closure date, announced in August 2011, means they will either have to purchase individual coverage—likely to be very expensive, given their age and family situations—or get new jobs with decent health benefits—also no easy task.

Local 12502 President Dave Weaver, who started at the plant as a janitor three decades ago and is now a control room operator, said the union has repeatedly asked the company to find a way to include the borderline employees in retirement health programs.

Weaver said the previous plant owner, ComEd, did something similar when it sold the plant in the late 1990s. Dominion spokesmen said they could not discuss this issue as it was raised in confidential union negotiations.

The State Line workers are generally considered highly skilled and they could benefit from an apparent slight resurgence in industry in the area, including the ongoing expansion of the BP Whiting oil refinery.

But those over age 50 fear that, laws against age discrimination not withstanding, they won’t be able to compete with younger workers in the still-tight job market. Several workers also told me that even if they do get full-time, union jobs—a big "if"—they will still have to start "on the bottom rung" with wages and benefits far below what they are accustomed to.

I have three kids still under my roof. What you have to pay for medical insurance (on the open market) for a family is outrageous. When you start a job you want to retire someday comfortably with healthcare. Now we’ve given most of our lives here, but we’re getting pushed out like we’re nothing. We just want the company to bend a little bit, to show us a little consideration. It’s not like we’re talking thousands or hundreds of guys…but they said they couldn’t do it.

Jeff Kuzma, 52, is a welder and mechanic with 33 years at the plant. "It’s not pretty out there, believe me," he said, adding that he worries about the health effects of working around coal dust, the plant’s emissions and other toxins for so long.

Tom Litwicki, a chief steward for the union, will get to continue buying insurance through Dominion since he turns 55 during the coming several months that the workers will get severance pay. But he feels for his co-workers who just missed the deadline.

On the company’s web page they always brag about how charitable they are, how they do so much for the community. But I thought charity started at home….We made a boat load of money for these people over the past few years.

The union members said they were insulted by the way the company handled the changing news about closure dates. Weaver and Litwicki noted that on April 28 of last year they were told to "plan your lives around Dec. 31, 2012," which was two years earlier than the 2014 closing date they had come to accept. Then on August 24, 2011 they were notified the plant would shut down by the end of March.

"I remember it was 4-28 and then 8-24," Weaver noted wryly. Closing at the end of 2012 instead of March would have allowed about 12 more men to continue their health insurance plans, Litwicki added.

The economic and energy landscape looked a lot different a decade ago when Dominion bought the State Line plant. Generation from coal, which still provides about half the nation’s electricity, could be highly profitable when sold in short term wholesale markets, benefitting from a complicated auction process where high natural gas prices meant a relatively high sale prices for all forms of electricity.

Companies that own coal-fired power plants across the country have decided, or are likely to decide in coming years, not to invest in expensive pollution control equipment needed to meet new federal environmental regulations in the pipeline. But to the chagrin of environmental and public health advocates, it was assumed most of these plants would keep running until the regulations took effect.

The steep drop of natural gas prices because of the growth of horizontal hydraulic fracturing changed that, making the old coal plants much less profitable to run even before the regulations took effect. Environmentalists are cheering the development. But Weaver feels like the workers got a raw deal:

If we were already running us into the ground, why can’t they keep running until we cease to be viable? Many of these guys thought they could stay here until they retire or work somewhere part time. Now they have to try to start all over.

We feel as a station we’ve been running so well, making so much money for them. We know we’ve done our share of polluting over the years, but no more than any other company in this area. All that pollution control stuff didn’t need to be on until 2017 or 2018. But now they talk about the fluctuations of coal and natural gas prices. Someone in their ivory tower has decided it will be too costly to keep us running.