Getting on the BRT Bus: U.S. Cities Eye Mexico Program That Benefits Workers 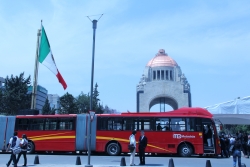 A shiny new Metrobus in front of Mexico City's monument to the Revolution.   (Photo by Kari Lydersen)

MEXICO CITY—Almost any time of day on Avenida de los Insurgentes, one of Mexico City’s busiest streets, people crowd onto the constant parade of shiny red buses that pull up to platforms every few seconds, whisking passengers to different neighborhoods in the city of 22 million.

This is the Metrobus system, one of the "bus rapid transit" or BRT projects that have been instituted in the past decade or two in Bogota, Johannesburg, Guangzhou and other Latin American, Asian and African cities. They've been proposed for an increasing number of U.S. cities.

The system is meant to enhance public transportation, help revitalize marginalized neighborhoods and reduce air pollution, with less expense and construction than new light rail lines. On a tour this week paid for by The Rockefeller Foundation and run by the international Institute for Transportation and Development Policy (ITDP), Metrobus official Gonzalo Garcia Miaja told me and other journalists that the system also means a major improvement in working conditions for bus drivers. And it makes the workday easier for hundreds of thousands of regular residents, who now have a much quicker, healthier and safer commute to work.

Intracity transport has a complicated and dramatic history in Mexico City. In the 1980s and 1990s the powerful bus drivers union fought bitterly with the administrations of presidents Carlos Salinas de Gortari and Ernesto Zedillo over plans to privatize the public bus system. Union leaders were jailed and massive protests rocked the city, as In These Times contributor David Bacon explained in this 1996 article. Unlike many unions of the time, Mexico City’s SUTAUR-100 bus union was not affiliated with the then-ruling PRI party, and they supported the Zapatistas during their 1994 uprising.

The labor clashes changed the face of standard public bus transport in Mexico City, with use of these "high capacity" buses dropping dramatically between 1990 and 2000. Standard public buses were largely replaced by a chaotic and allegedly corrupt system of private small microbuses, or "combis," with a mosaic of small fleets run by extended families and syndicates, with relatively little oversight from the government. According to the ITDP, the percent of trips by microbus increased from 36 percent in 1989 to 54 percent in 2000 as the use of high-capacity public buses plummeted.

As in many other cities in the "developing world," Mexico City microbuses are infamous for driving wildly through crowded and perilous streets, motivated to pick up as many passengers and reach their destinations as quickly as possible—for more profit. The operators also typically delay repairs and maintenance and run the vehicles for as long as possible, meaning many archaic, heavily-polluting and dangerous microbuses on the street.

Enter the BRT system starting in 2005, wherein city and private officials with the new agency Metrobus essentially convinced seven of the city’s main private microbus operators to become partners in the new public-private Metrobus organization in exchange for removing their microbuses from key routes.

The Metrobuses have their own dedicated lanes, and people pay fares on platforms as at light rail stations, so the buses can move very rapidly. The city government oversees the Metrobus program, while the collectives of private operators pay the costs and reap the profits.

Many microbus drivers lost their jobs because of the conversion, since a total of 1,077 microbuses (with at least that many drivers) were removed from the streets, while currently about 800 drivers now operate the city’s fleet of almost 300 Metrobuses.

Garcia noted that many of the microbuses were family operations "where the father drives in the morning, the brother in the afternoon and the son in the evening," and the whole family profits; so the streamlining of operations into the Metrobus system wouldn’t necessarily mean devastating layoffs for drivers' families.

But Garcia said working conditions are much better for the drivers who now pilot Metrobuses instead of microbuses. They now have health insurance and pensions, he said, and work 8-hour days, compared to workdays that could last 20 hours in the past. And they are paid based on numbers of kilometers driven on established uniform routes rather than by the number of passengers they pick up—so the actual driving is much safer and more relaxed.

"Previously their income was directly proportional to the number of passengers they were carrying, so they were literally killing themselves to get more passengers," Garcia said.

Additionally drivers and passengers in the old microbuses were exposed to high levels of benzene, particulate and other air pollution extremely harmful to health. Tests have shown the air emissions from Metrobuses are much lower—about 35 percent less benzene exposure and 54 percent less exposure to carbon monoxide for riders and drivers, and of course less pollution for the city as a whole.

Official policy and reality regarding working conditions, customer protection and civil rights are often far apart in Mexico, so U.S. advocates and analysts usually take official statements with a large grain of salt. However, Mexico City Mayor Marcelo Ebrard of the center-left PRD, whose six-year term expires this fall, has generally been supported and praised by people across the political and economic spectrum for his populist policies and his efforts in revitalizing and securing the city.

Bus rapid transit has been proposed for an increasing number of U.S. cities including Chicago and Detroit. In Latin America the systems are typically run by private operators, with the contracts bid out or, as in Mexico City, run by the operators of previously existing microbus systems. In the U.S. such bus rapid transit would typically co-exist with current light rail and regular public bus systems, in most cases replacing some regular bus routes. Bus rapid transit could be incorporated into the existing public systems or privatized or some hybrid of the two approaches. It is not clear how it will play out exactly in different U.S. cities, whether workers will be unionized or whether there will be opposition from public transit unions.

On March 12 a fleet of 17 new Metrobuses including prized "bi-articulated" (three-car) ones lined up in formation in front of Mexico City’s Plaza de la Republica, a monument to the 1910 Revolution. The grand structure was under construction as the country’s new Congress building at the time of the Revolution; it was left unfinished and later revamped as an homage to revolutionary leaders including Emiliano Zapata, Pancho Villa and Ricardo Flores Magon. Nearby is an historic massive jai alai stadium where workers have been on strike since 1994. An occupation continues inside and faded red and black flags cover the entrances.

(Protests and strikes are a constant presence in Mexico City. For example, during our tour, one Metrobus line was blocked by a public protest, and a separate protest of union pensioners against the government of Tabasco state blocked one of the separated bike lanes that are also part of the current administration’s sustainable transportation initiative.)

Facing the Revolution monument with the buses lined up expectantly behind him, Mayor Ebrard described the Metrobus system as part of a larger effort to make Mexico City more livable, sustainable and healthy. Ebrard, an ally of famous former Mexico City Mayor and presidential candidate Andres Manuel Lopez Obrador (AMLO), has won international attention for his "green" initiatives in Mexico City and his outreach to poor and working people.

"It’s dramatically changed the culture of the city," he told a crowd at the unveiling of the new Metrobuses.