Judge Drops the Hammer on Union Members at Hostess 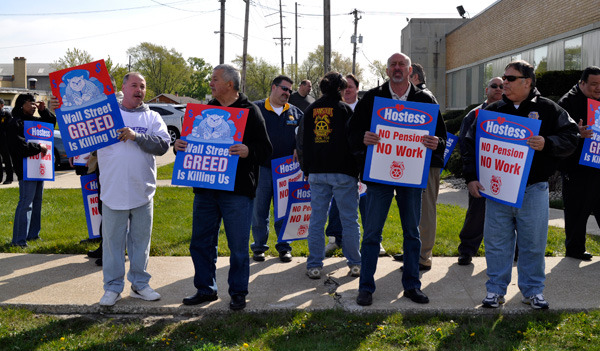 Teamsters rally in April to save their pensions outside one of Hostess' Illinois transport facilities, from where products like Wonder Bread and Twinkies are distributed into the Chicago region.   (Photo courtesy Pat Barcas, Fox Valley Labor News)

Allows company to cancel union contracts; on same day, Twinkie-maker sends lay-off notices to all 18,500 workers
A federal judge is moving to end a tense labor standoff at Hostess Brands by bringing the heavy hand of bankruptcy law down in favor of the corporate managers and against the employees who produce the cakes and breads that have made the company famous.
Judge Robert Drain issued an order May 4 giving the company permission to unilaterally cancel union contracts covering thousands of production workers at the plants where Wonder Bread, Twinkies and dozens of other goods are made. The workers—represented by the Bakery, Confectionery, Tobacco Workers and Grain Millers Union (BCTGM)—may see their wages and benefits arbitrarily reduced by the company, as well as losing the labor union rights they have enjoyed for decades.
Drain’s decision is equally bad news for the Hostess employees represented by the Teamsters and a half-dozen other smaller unions. Bankruptcy court proceedings are already in progress to strip these workers of their labor rights as well, and Drain’s action against the BCTGM indicates that other union members can expect the same sort of treatment at his hands.
“I just don’t know what is going to happen right now, but it’s not going to be a pretty picture,” BCTGM President Frank Hurt told In These Times this week. “I don’t have any hope that this company can be saved,” in its current form because of these developments, he said.
Hurt’s uncertainty is based on an unclear and sometimes contradictory approach by Hostess executives to its union members, particularly since the company initiated Chapter 11 bankruptcy proceedings in January. On the one hand, it has threatened to use bankruptcy court mechanisms to break the unions, while on the other it has issued pleas for cooperation in renegotiating contracts in a way that will allow the company to repair its finances and return to profitability.
The latest such plea came just this week, when Hostess spokesman Erik Halvorson told In These Times that the company would not immediately exercise its new power to cancel BCTGM contracts. Instead it hopes that an out-of-court settlement might be reached with the union that would avoid cancellation of existing agreements, he said. However, Hostess also sent out notices May 4 to all of its 18,500 workers (including non-union employees) that their jobs would be eliminated.
All eyes now turn to a May 14 deadline for action on a similar struggle between Hostess and the Teamsters. Judge Drain is expected to rule at that time on a motion allowing Hostess to cancel the Teamster contracts, according to Teamster spokeswoman Leigh Strope. In the meantime, Teamster leaders are willing to continue talks toward an out-of-court settlement, Strope said.
Cancellation of the Teamster contracts next week could well provoke a new crisis at the company, according to statements from union leaders. Rank-and-file members have already voted to authorize a strike if the contracts are cancelled, and Hostess officials have warned that such an action could mean the final collapse of the company.
In any event, hopes for a fair and orderly reorganization of the company under bankruptcy rules are largely gone, BCTGM’s Hurt indicated. “The investors who are in control want to do the same thing that Mitt Romney did (as an executive of Bain Capital)  -- break up the company, take the money, and leave somebody else holding the bag,” Hurt said.
The union has been already been told that as many as 10 of the company’s bakeries will be shuttered, even if the company can move forward with a reorganization plan, Hurt told In These Times. That means mass layoffs all along the production and distribution chain even in a “best case” scenario.
The company has also ceased to make any pension plan contributions for the workers, and there is every indication that Hostess plans to use the bankruptcy laws to avoid paying pension contributions that it owes from years past, he said. Hurt charged that company executives were using the cash saved from starving the pension plans to keep the company afloat while plans are finalized for a breakup.
“They are running this company by taking it out of our hides,” he concluded.