Wages Rising in Chinese Factories? Only For Some 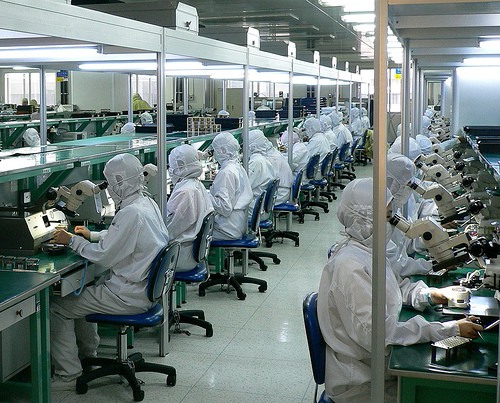 If we are to take recent news reports at face value, the collective conscience of the world's consumers can be eased, because conditions at Chinese factories are improving.

Last year, The New York Times told us that these workers are “cheap no more,” and just this February, the Heritage Foundation, touting the virtues of global free trade, claimed that Chinese factory wages have risen 20 percent per year since 2005. Foxconn, Apple's major supplier and the manufacturer of approximately 40 percent of the world's consumer electronics, says it will hold free union elections every five years.

But Pollyannas should take pause: The average migrant worker's $320 monthly salary in 2011 was actually 43 percent less than the $560 national average, according to government statistics. And though it's true that Foxconn will permit the election of union leaders, we have yet to see how much China's so-called democratic unions can empower the workers they purport to represent.

Skepticism and caveats aside, the reality is that the lot of formal production workers in China is indeed advancing, however slowly and painfully. But that is true only for formal workers. What many consumers and observers fail to note are the perilous conditions of China's temporary production workers and the increased tendency among Chinese factories to use such workers to manufacture the brand-name products that fill your home.

Factories supplying Apple and Samsung, for example, make heavy use of temp workers. According to official statistics, temp workers make up 20 percent of China's urban workforce of 300 million, though the proportion in individual factories often tops 50 percent. As China turns into a land of short-term workers, there are grave implications for labor, companies, and Chinese society.

What is a Chinese temp worker?

The second term is instructive. Temp workers in China are primarily recruited and assigned via laowu paiqian gongsi (劳务派遣公司), “labor dispatch companies.” These are conceptually similar to America's staffing agencies.

Another thing Chinese and American temp workers share is a lack of benefits. Temp workers in a Chinese factory do not receive any type of insurance from the factories, leaving them with neither a health care safety net beneath them nor a retirement net ahead.

But working sans benefits is one of the few things all that American and Chinese temp workers have in common. While an American temp may be employed only 30 hours per week, a Chinese dispatch worker might spend 12 hours per day in a factory six or seven days a week.

What makes Chinese temp workers both unique and their plight urgent is the illegality of their conditions. Article 68 of Chinese labor law defines non-full-time workers as those employed no more than 24 hours per week and an average of four hours per day, filling a company 's short-term temporary needs. But the reality is that such workers do more overtime than the law permits, lack a contractual relationship with their employers, and are often paid sub-minimum wages.

Why do temp workers exist?

Businesses gain considerable cost-saving benefits by using temp workers in their factories. Temp workers do not sign a contract with the factories, relieving the company of responsibility for providing these workers with the five types of insurance mandated by Chinese law. In a mid-sized factory with 500 temp workers, the company could save tens of thousands of dollars per month in insurance payments alone.

Another long-term benefit for companies is that they do not have to employ veteran workers who might require higher pay. Rather, the company can let temp workers come and go, then hire the next batch of cheap young temps. In cases where workers are injured, the company is less likely to be forced to pay compensation because the worker does not have evidence of a contractual relationship. Finally, factories can skimp on making their facilities more pleasing for workers since the workers are not expected to stay.

Temp workers do gain some benefits, however short-sighted they may be. Using the temp route, workers have a sense of freedom. Factories make promises during recruiting that end up being distant from the true working and living conditions within, and managers are often unkind or condescending toward workers, most of whom have less than a high school education. For these reasons, workers may understandably wish to avoid dealing with the stresses of being a formal employee in the factory. The thinking is, “If the supervisor has it in for me, I can simply leave and get assigned elsewhere.”

Another reason one may prefer to be a temp worker is the frequency of pay. In China, where factory profit margins are often thin, employees commonly get stuck working without pay. Temp workers can sometimes avoid the wage-arrears headache when they get paid daily or weekly.

Poor governance in China has played a major role in the rise of the temp phenomenon. The text of Chinese law is generally pro-labor. But in reality, collusion between local government and business interests—and the oiled gears of bribery—have led to severely sub-par law enforcement.

The risks of a temp worker empire

The most apparent victims of an economy that relies on temp workers are, of course, the workers themselves. The price they pay for the freedom to walk away is unequal treatment under law, a lack of economic security, and a weakened ability to defend their rights. Unlike formal employees, temp workers are often paid less and do not usually receive insurance. If they are injured on the job, they must depend on their own meager savings, those of their economically disadvantaged families, or the benevolence of the factory. If a worker wants to take a job-injury or rights-violation case to court, her legal standing is diminished because she lacks a contract with her employer.

The system also presents risks to business. First and foremost, the conduct surrounding the employment of temp workers is illegal in China, and businesses risk being sued or criminally indicted for their behavior. Economically, while the up-front savings for a company may seem obvious, temp workers will be unfamiliar with the production process and less committed to the factory; the result is inefficiency and a greater number of deficient products.

At a broader political level, with intermittent work and illegally unequal wages, the growing temp worker population contradicts the Chinese government’s professed commitment to reducing economic inequality (Chinese). On the government's priority list, social stability comes a close second to development, and the growth of a transient, marginalized social group is not conducive to stability.

Turning back the tide of temps

When the numbers are crunched, businesses using temps can perhaps improve their bottom lines. But this wanton pursuit of profit is illegal, unethical, and a poor standardization of business practices. Chinese factories and the global brands they supply have a social responsibility to respect the value of full-time jobs and eradicate the illegal use of temp workers.

Workers and labor-rights NGOs, for their part, must continue to increase awareness among the worker community of the risks of temp work and the rights of labor.

The Chinese government has an obvious responsibility to strengthen the enforcement of its own laws. Indeed, in December the government strengthened restrictions on the use of temp workers, but without effective enforcement, these are empty expressions and may only serve to further diminish the respect for law.

Lastly, the duty of foreign governments is clear: The U.N. Guiding Principles on Business and Human Rights, unanimously endorsed by developed countries, states that a government has the duty to prevent companies operating in its jurisdiction from violating laws and impinging on human rights in other jurisdictions. The U.S. and others should pass national laws that punish companies for labor violations in foreign territories. Such a law would have the support of Americans, who know that “injustice anywhere is a threat to justice everywhere.”

Opinions expressed here are not necessarily those of China Labor Watch.

Kevin Slaten is program coordinator at China Labor Watch. He previously conducted a year of field research on workers' rights defense in the factory districts of Qingdao, China. Before that, he was a Fulbright Grantee and a Junior Fellow at the Carnegie Endowment for International Peace. You can follow him on Twitter @Kevinslaten. Xue Chao was the program director for five years at New Urban Home, a labor NGO in Qingdao, China. He is currently studying law and plans to become a labor lawyer.