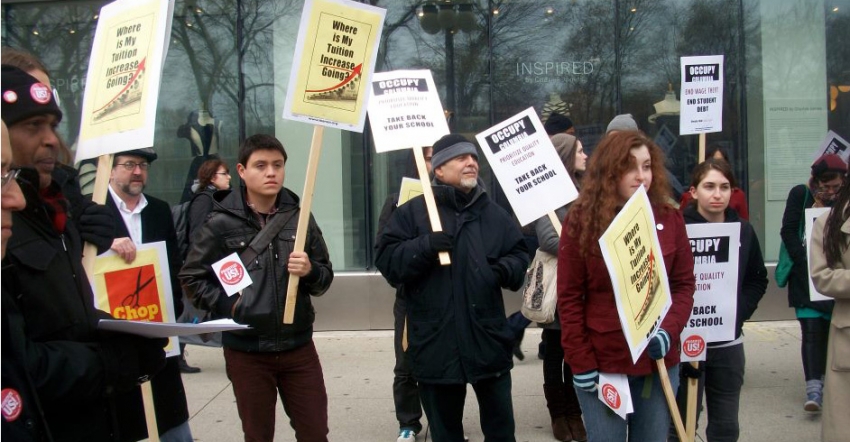 Members of Columbia College Chicago's Part-time Faculty Association and their supporters rallied in December 2012, calling for a fair contract. (Photo via P-fac)

Unionized adjunct faculty at Columbia College Chicago appear poised to go on strike for the first time, with union president Diana Vallera telling In These Times that “the College has left only one path for part time faculty and that is a strike.” The Part-Time Faculty Association, or P-fac, and the administration have been at loggerheads in extremely contentious negotiations for about three years.

Union leaders are surveying the rank and file about a possible strike, and early results show 80 to 90 percent support, according to Vallera.

Like other adjuncts around the country, P-fac members complain that the college is taking advantage of their labor without treating them with respect or compensating them fairly based on their experience and dedication. Adjuncts say it is difficult to make a living even working full-time, since they have no benefits and little job security, with scheduled class assignments often canceled at the last minute.

“Undignified treatment of our most senior faculty who have made Columbia what it is today is the most egregious” problem, said Vallera, along with what she describes as the administration’s “unwillingness to work collaboratively with the union that represents the majority of the faculty," its "union busting tactics" and "the overvaluation of money above people and students ”

Columbia College declined to answer questions and offered this statement: “Columbia College will continue to engage in good-faith bargaining with P-fac and hopes to reach a new agreement in the near future. Our focus remains on the educational well-being of our students as well as the vitality and quality of the college itself.”

Vallera said the survey results showing widespread support for a strike “are exciting for us—our members are ready to take action if needed.”

While making picket signs with Columbia students this week, Vallera said student interest in the adjuncts’ battle has increased recently and some students have attended bargaining sessions. “They couldn’t believe how we’ve been cheated,” she said.

The union has filed multiple complaints with the National Labor Relations Board (NLRB) and won some important rulings, as previously covered by In These Times.

The latest outrage in the ongoing saga, Vallera said, is a relatively new program described as providing experience for graduate students that actually provides cheap teaching labor for the university. Under the program, students with as little as one semester of graduate school under their belts—and no pedagogical training—are teaching classes that in the past were taught by experienced adjunct faculty, the union says. P-fac found out about the program, which has been going on since at least the fall, as a result of an NLRB ruling demanding the college return over documents the union had requested. A press release from the union says that in the past year, 300 classes have been “wrested away” from union adjuncts and given to grad student instructors.

Vallera described this as a move to cut costs—since grad students earn much less than senior adjuncts—and also to undercut the P-fac union, since students aren’t union members. The NLRB is currently deciding a case regarding whether grad students at private colleges like Columbia have the right to unionize. Public university grad students in Illinois can unionize, and those at the University of Illinois at Chicago have a union.

In March, the union filed an unfair labor practices charge with the NLRB regarding the graduate-student program; the charge is still pending. The union argued that the influx of graduate student teachers is “unlawfully eroding” the union’s bargaining unit by cutting the ranks of adjuncts and is also illegally awarding graduate students benefits that are only supposed to go to union adjuncts.

Many colleges and universities enlist graduate student “teaching corps.” What makes the situation different at Columbia College, the union says, is that administrators are not being upfront about the extent of graduate student teaching with either parents or adjuncts. In October 2012, an anonymous letter backed by the union was sent to the administration describing the graduate student teaching as a “potentially dubious labor and educational practice” in the English department.  The letter charged that the program had been “cleverly hidden” for some time.

As described by DNAInfo.com, Columbia College students pay an average of almost $28,000 a year, according to a White House scorecard on college finances. Columbia students had the city’s highest average monthly loan payments, at $302, according to the scorecard.

The potential strike comes as the college prepares to welcome a new president and CEO in July—accomplished pianist Kwang-Wu Kim. Vallera said union leaders have been hopeful that the new administration will be more receptive to working with them, but so far the incoming president has not made any overtures.

If a strike is what it takes to truly get the attention of those in power, Vallera said, adjuncts are ready for it.

“Ultimately a strike will lead to a fair contract, which in turn will allow for a community of dignity, transparency and greater mutuality,” Vallera said.

P-fac will hold a rally on Thursday May 9 from 11am to 1pm outside Columbia College Chicago, 600 S. Michigan Avenue. A bargaining session is scheduled for the following day, from 10:30am to 4:30pm at the same building. P-fac is an affiliate of the IEA-NEA. Disclosure: this writer is a past member of P-fac.