10-Year Strike at Chicago’s Congress Hotel Ends in Defeat, But Leaves a Legacy 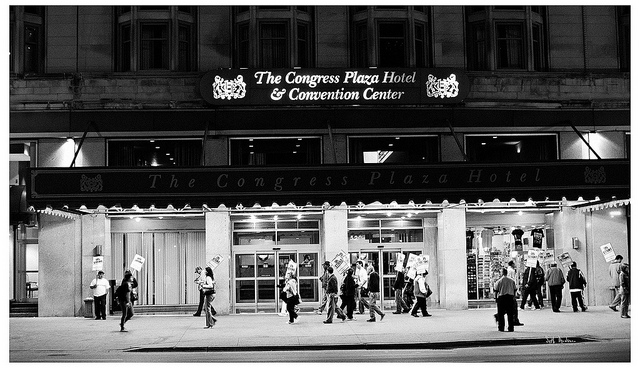 Picketers in front of the Congress in 2007. (Seth Anderson/Flickr/Creative Commons)

The longest strike in America ended yesterday when the union representing workers at the Congress Hotel in Chicago tacitly admitted defeat at the hands of an owner whose iron resolve to break the strike seemed stronger than his desire to turn a profit.

Despite the defeat, the 10-year strike leaves a complicated legacy for Chicago’s labor movement. Its confrontational tactics have resonated throughout the city and struck fear into the hearts of bosses.

I first encountered the strike unexpectedly, and embarrassingly, on a daylong trip to Chicago when I was 17, just before moving there for college. Some friends had booked a room in the cheapest downtown hotel they could find. I arrived around midnight, noticing signs of an owner who didn’t feel the need to fix crumbling plaster, but none of a fight between management and workers.

When I walked onto Michigan Avenue the next morning, to my horror I had to exit through a picket line. At the early morning hour, the strikers didn’t seem to have the energy to subject me to the shrill shaming that is the fate of most picket line crossers. But I did talk at length with one of the workers, who explained the strike’s history.

In 2002, in the middle of the post-9/11 recession, UNITE HERE Local 1 workers from 39 hotels covered by a single citywide contract threatened a strike. The action would have paralyzed Chicago’s hospitality industry. The hotels caved, and the union negotiated a contract that included gradual raises over four years that nearly doubled wages for the city’s hotel workers, eventually bringing the standard wage at union hotels to $14.60 per hour for housekeepers (today, after raises from other contracts, it’s $16.40).

But the Congress, located on prime real estate on the downtown “Magnificent Mile,” removed itself from that agreement. Instead, the Congress demanded wage cuts and increasing contributions from workers to healthcare costs. In response, a majority of the hotel’s 130 workers voted to strike in 2003. A decade later, the strike has ended, but without any tangible gains for the workers.

Unions almost always try to spin crushing losses as partial victories, but even the union’s president didn’t try to hide a sense of resignation and defeat. “It is the right time for the union and the strikers to move on,” Local 1 President Henry Tamarin wrote in a statement. “There is no more to do there.”

On its face, the strike appears to be a long, costly, abject failure. It became the longest strike in America years ago, and the workers did not win on a single one of their demands. On a local news show yesterday, Peter Andjelkovich, the hotel’s attorney, seemed to linger upon the word “unconditional” when describing the terms of the strike’s end, relishing the hotel’s victory. Asked if wages and benefits at the hotel have changed, Andjelkovich didn’t hesitate. “No. They did not get any concessions.”

This despite the Herculean efforts the union waged during the strike. Workers and religious leaders traveled to Geneva, Switzerland, attempting to confront the owner, Albert Nasser, at his primary home there. (Nasser hadn’t been to Chicago since before the strike.) Union members led a delegation to the Philippines, meeting with workers at garment factories owned by Nasser. (These and other holdings around the world likely provided the bulk of Nasser’s wealth for the past decade; tax documents indicate that the hotel has been bleeding money for years, thanks in part to the union’s efforts.)

The union also fought for years to keep the City Council from granting the hotel a permit for a sidewalk cafe and a four-floor expansion of the hotel, at one point working with a union-friendly city council member to block the plans before hotel lawyers successfully overturned the ruling.

Strikers were constantly picketing in front of the hotel on Michigan Avenue, one of the city’s busiest drags. During the last half-decade, they were less likely to be in front of the hotel and more likely to be paying unannounced visits to companies or conferences that had reserved blocks of rooms at the hotel, telling their stories of hardship at the hands of the Congress and demanding the reservation be canceled. These cancellations alone may have cost the hotel millions over the years.

When companies refused to budge, UNITE HERE would escalate its tactics, often driving their targets insane. I once accompanied the union to a 5K “fun run” for attendees of a healthcare conference whose organizers had refused to cancel their Congress reservations. Strikers jogged alongside baffled spandex-clad runners, shoving fliers in their sweaty hands and explaining the impact of the hotel’s intransigence on their families. One older organizer devised a complicated scheme to make runners believe he had laid a tripline across the trail––he would pretend to pull it taut ahead of them, causing confused runners to halt in their tracks.

At another event, attended by some company officials who continued doing business with the hotel on the second floor of a mostly glass convention center building, the union raised a small blimp with a message to attendees demanding they cut ties to the Congress.

The union quickly developed a reputation throughout Chicago for the confrontational, and often absurd, lengths to which they would go to challenge anyone crossing the picket line.

And it was that reputation that made the strike significant. Even though the strikers won no concessions for themselves, the union’s confrontational tactics had a chilling effect upon Chicago hoteliers.

For years, union staffers say, other hotels would reference the Congress during contract negotiations. they would fight the union on compensation and working conditions, but they would also make clear they didn’t want their guests to receive the kind of treatment at the hands of unions experienced by those who had refused to cancel Congress reservations. The strike had a similar effect on other hotel workers, who saw the strikers refusing to settle for substandard wages as a kind of inspiration in their own struggles with management.

More broadly, the strike became a fixture in Chicago, a veritable landmark of class struggle in the city’s central district of consumerism and commerce. Students from Chicago and elsewhere often joined the strikers on the picket line or on delegations through alternative break trips or service learning classes. The strike became a cause célèbre for everyone from suburban peace and justice groups to Jewish community organizations and synagogues.

At a time when strikes in the U.S. are at their lowest levels in decades, the Congress served as a daily reminder that a fighting working-class spirit had not been totally snuffed out in the city.

Unsurprisingly, that fighting spirit flagged with each passing year. I remember walking past the picket line and seeing strikers wearing earbuds. The annual summer rally marking the strike’s anniversary––an annual pilgrimage for labor stalwarts and some Democratic politicians (including then-Sen. Barack Obama in 2007)––seemed to dwindle in size every year. Like many other Chicagoans, I eventually stopped attending. It was too depressing.

It is difficult to imagine what else the union could have done to win the Congress Hotel strike. Faced with a reclusive owner living halfway around the world who could draw upon much larger holdings on another continent for his income, who was bent on beating the union even as it drove the hotel into the red, any union would find victory difficult.

The Congress workers did not go down without a fight, but yesterday, they did go down––and with them, a fixture of class struggle disappeared from Chicago’s landscape. But perhaps the memory of that struggle, and the fear it inspired among many of the city’s bosses, will linger long enough for other upstart workers to fight and win.