Why a Picture Is Worth a Thousand Words: Laid-Off Photojournalists Defend Their Field 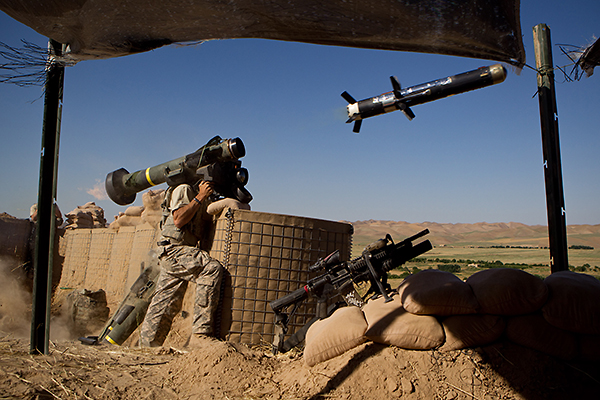 While embedded with a U.S. regiment in Afghanistan in May of 2010, photojournalist Andrew Nelles took this shot of Sgt. Christopher Bunnell firing a Javelin missile at a structure outside of Bala Murghab.   (© Andrew A. Nelles. All rights reserved.)

CHICAGO—A month after the Chicago Sun-Times laid off all 28 of its full-time staff photographers, a cadre of prominent photo editors and photojournalists made a case for the very existence of their trade at a panel discussion before a packed room in downtown Chicago.

The panelists, who spoke at the Harrington College of Design on June 27, all acknowledged that the seismic shift to digital, which is transforming both photography and news, is in many ways an exciting and positive development. But they rued the fact that the transition has entailed a devaluing of photojournalism and the skills and nuances it requires.

Just as stories by untrained and unpaid (or low-paid) “citizen journalists” have become more common in media outlets, so too have photos taken by everyday people, especially with iPhones.

Cahan said that he follows the work of numerous amateur photographers on Flickr and finds countless impressive and beautiful images. But he still made a distinction between those shots and photojournalism. Amateur photographers without journalistic training “are not being asked to go to the widow of a policeman who was shot,” he said.

He joked that he would accept the concept of “citizen journalists” when people are ready for “citizen surgeons.”

“Many people, even some editors, believe photojournalism is simply pushing a button at the right time in the right place,” said Chicago Tribune picture editor Michael Zajakowski. “Photographers have to be right there in the scene, whether baseballs or bullets are flying.”

Meg Handler, former photo editor at The Village Voice and long-time documentary photographer, noted that shots by regular citizens often serve as “filler” in coverage of big news stories, like the Boston Marathon bombing. Countless citizens’ shots circulated in the media but ultimately it was professionals who took the “iconic images” that will live in the collective public memory.

While media outlets across the country have increased their reliance on unpaid amateur photographers, since the layoffs the Sun-Times has relied mostly on photo and video from reporters, freelancers and wire services. Panelists says that this may be sufficient for illustrating news stories, but that having a fleet of professional photographers roaming the streets on a daily basis allows them to become deeply familiar with certain scenes and communities, producing some of the best and most unexpected shots.

As the photographers spoke, slides of some of their favorite images were projected, in an exhibit worth a thousand words (or more) depicting the value of photojournalism. Laid-off Sun-Times photographer Andrew Nelles’ vibrant shots of young women athletes in action were juxtaposed with those of soldiers reading girlie magazines in a dusty war zone. Screens also displayed stirring images by Alex Garcia, founder of the Chicago Tribune’s blog Assignment Chicago, of an impoverished nursing home in Cuba, the lone shoe of an astronaut killed in the Columbia shuttle disaster, the barely lit profile of a Mexican immigrant being deported.

An amateur photographer would not be able to get access to a bus carrying deportees, or have the ability to drive all over Texas looking for the shoe, Garcia noted.

Is journalism primarily for profit?

In the context of the layoffs, Cahan raised the question of whether media outlets are simply bottom-line-driven corporations or whether they have a larger obligation to their employees and the general public.

Garcia answered that media outlets “don’t owe a job to anybody.” But he noted that outlets pay very little for “raw materials”—they trade in the free and intangible commodity of information. “They’re getting access to people’s emotions and people’s lives. …That’s ‘free content,’” he said. If quality journalism is gutted or chipped away at in the name of profits or cost-cutting, he said, “customers will sense that social contract is not being honored.”

Zajakowski agreed, saying that since the mass photographer lay-offs, the Sun-Times’ “credibility has eroded significantly.”

In June, the former Sun-Times photographers picketed outside the paper’s offices, joined by other union members—including Chicago Teachers Union president Karen Lewis—and some of their former colleagues at the paper. The laid-off photographers include John White, a legendary Pulitzer Prize winner who had worked at the paper for 44 years.

Cahan asked whether the Sun-Times move would inspire other media outlets to dump their photojournalists. The panelists agreed that it would vary by company. This may have been a chilling thought for the Chicago Tribune employees in attendance, as the notorious, right-wing Koch brothers are contemplating purchasing their company.

A coalition called Save Our News that includes the AFL-CIO and SEIU, along with environmental and civic groups, has protested against the possible sale of Tribune papers in Chicago and at least 11 other cities to Charles and David Koch. The labor-community-interfaith coalition Stand Up! Chicago has led the local campaign. At a May 29 protest, people held placards with fake news headlines, like “Romney Defeats Obama.”

A statement from AFL-CIO president Richard Trumka said: “It is hard to imagine how the Tribune newspapers would continue to provide quality independent journalism to the communities they serve if they were under the control of the Koch brothers."

Forging ahead, scraping by

Given such corporate-consolidation trends in the media world, photojournalists on the panel and in the audience agreed that freelancing will increasingly be the reality for anyone who wants to work in their field. Even in journalism’s heyday, few went into it for the money, and photojournalists indicated that the dedication they feel to the craft will keep them going even if the paychecks don’t.

Nelles, one of the “STM 28”—as the laid-off Sun-Times photographers have come to be known—quickly made a name for himself in photojournalism after quitting his mechanical engineering studies at Purdue University in 2005. Entering the field just as full-time jobs were disappearing, he’s spent most of his career hustling to make his way as a freelancer, except for his stint at the Sun-Times. Nelles raised funds on his own for two trips to Afghanistan, where he embedded with the U.S. military as a freelancer, and for another trip to cover the rebuilding of Iraq. In response to a comment from the crowd, Nelles said he does not have a trust fund. But like so many other photojournalists he has made sacrifices to do the work he finds important—whether corporate bean counters deem it valuable or not.