This Thanksgiving, Spare a Moment to Consider Turkey Plant Workers 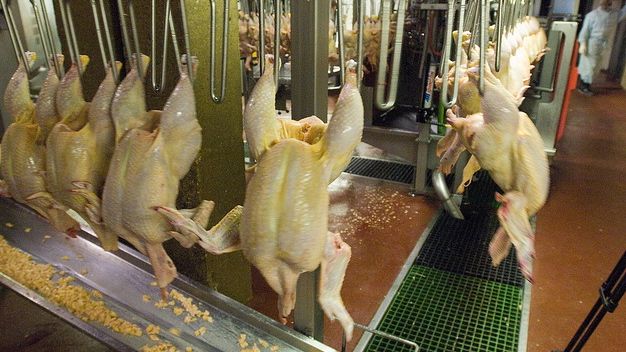 With Thanksgiving Day nearly upon us, government officials are moving forward with plans to privatize some poultry inspections at chicken and turkey slaughter plants in a manner that could compromise worker and consumer safety.

The poultry privatization plan would eliminate some 800 government food safety inspectors and replace them with employees hired directly by the poultry companies, says Ken Ward, a retired veteran of the Food Safety and Inspection Service at the U.S. Department of Agriculture (USDA). It would also speed up inspections, he says, allowing slaughter line speeds to be increased from 32 turkeys per minute to 55 birds per minute, with similar increases for other poultry. That’s too fast to do proper inspections for signs of disease or other health problems in the birds, he suggests, and could lead to unsafe food being shipped out to local supermarkets and butcher shops.

With those consumer safety concerns in mind, representatives from the Washington, D.C.-based advocacy group Food and Water Watch analyzed USDA data at plants where the proposal was tested as part of a pilot project. They say they found potentially concerning results, including birds whose meat had been contaminated by fecal content and that had already died of other disease before slaughter. “The data is disturbing," says senior lobbyist Tony Corbo. "USDA has minimized the importance of catching defects" in the birds, and the pilot program seems rigged to provide financial benefits to the producing companies while putting food safety at a lower priority, he says. In order to correct the problems with the USDA proposal, he continues, “New regulations or new legislation is required."

But the plan's potentially dangerous consequences wouldn't be limited to the holiday dinner table. A spokesperson for the United Food and Commercial Workers (UFCW), which represents about 65,000 poultry workers nationwide, tells Working In These Times that increased line speeds are associated with musculoskeletal disorders like carpal tunnel syndrome, and that the union wants further study on the worker safety elements of the USDA proposal before going forward. Ward himself has also been an outspoken critic on this proposal for similar reasons.

Other workers' rights groups are concerned that any adverse safety effects for workers will disproportionately affect people of color and women, because the plant managers tend to hire workers from these groups. Catherine Singley, a policy analyst with the advocacy group National Council of La Raza, says that La Raza opposes the privatization because it will allow poultry processing companies to speed up production lines at dozens of their plants. "Consumers should be alarmed to learn that [the USDA plan] puts food workers in harm's way," she continues.

These objections have all been articulated in the past as the USDA has steadily moved forward on its proposal, which was first advanced in the late 1990s, says Singley. Having completed the last stage of its rulemaking process, the USDA is waiting for final approval from the Office of Management and Budget. The Obama admnistration's most recent budget proposal foresees the implementation of the plan in plants all over the United States as early as 2014. And for its part, the USDA has maintained for years that its plan will have no ill health effects on birds, consumers or workers.

But Singley hasn't lost hope. Given that USDA Secretary Vilsack still has the ability to kill the proposal, she says that conscious consumers and worker rights advocates should be “urging [him] to abandon his plan."

Working in concert with La Raza, the Southern Poverty Law Center (SPLC) is also urging new involvement from the Occupational Health and Safety Administration (OSHA). According to a petition the SPLC issued to the organization in September, OSHA should be regulating line speeds at poultry plants, an activity that has been outside OSHA’s governmental jurisdiction in the past. “The hardworking people who produce our food should be protected from dangerous conditions that lead to avoidable injuries,” said SPLC’s Tom Fritzsche in a statement announcing the petition. “The current system may be profitable for the poultry companies, but it relies on systematic exploitation of workers. Now, regulators are about to make conditions even more hazardous.”

In a press briefing organized by SPLC last week, former turkey plant worker Esmundo Juarez Carranza endorsed efforts to stop the USDA plan and issued a plea for better treatment of poultry workers. Carranza says he was unfairly fired from his job at a Cargill turkey slaughter facility in Springdale, Ark. after leaving his post on the production line to use the bathroom without first getting permission from supervisors.

Mike Martin, a spokesperson for Cargill, confirmed that Carranza is an ex-employee, but says that any allegation that Carranza was fired unfairly is false. "All the workers at our plants have regular breaks and meal periods," he maintains. Though he can't speak about the details of Carranza's case, he says Cargill workers are not fired over minor matters like unscheduled bathroom breaks.

Carranza, however, says workers at Cargill suffered from low pay, onerous working conditions and abusive managers. As the poultry producers strive to maintain fast line speeds, he says, they're subjecting workers to tighter restrictions—and often disregarding the workers' emotional and physical well-being. “They treated us worse than animals,” he says.

SPLC collected stories similar to Carranza’s from about 300 Alabama poultry workers for a report it released earlier this year titled “Unsafe at These Speeds." Among other findings, the report estimated that almost three quarters of poultry workers suffered from occupational injury or disease—many of which were associated with fast slaughter line speeds.