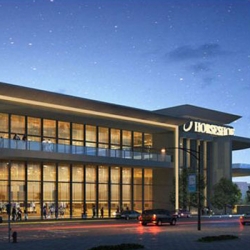 Labor unions in the Washington, D.C. area got an early Christmas present December 20, when Maryland state officials announced their approval of a plan to build a massive MGM Resorts International casino complex just a few miles from the nation’s Capitol building.

The news comes as a welcome sign of organized labor’s vitality in Maryland, which has seen falling union membership during the last decade. As of 2012, unions represented just 12.3 percent of Maryland jobholders—a decrease of 23,000 workers from the previous year.

One of Maryland labor’s responses to this challenge has been to lobby on behalf of expanded gambling long before casino construction ever takes place, usually in return for a mutually beneficial “labor peace agreement." In the case of MGM Resorts, the gambling powerhouse received its approval from the Maryland Video Lottery Facility Location Commission with the help of an ad-hoc coalition of local labor unions, says John Boardman, an officer of D.C.-based Unite Here Local 25. He estimates that the $925 million project will generate about 2,000 temporary construction jobs and 4,000 permanent ones.

“We have a labor peace agreement with MGM, so I expect we will be moving pretty quickly to organize wall-to-wall,” Boardman tells Working In These Times. About 2,000 of the permanent casino workers are likely to be represented by Local 25, he says, with the remainder spread out among Teamsters Local 639, International Union of Operating Engineers (IUOE) Local 99 and International Alliance of Theatrical Stage Employees (IATSE) Local 22. Similarly, the 2,000 temporary construction jobs are expected to be filled by union members linked to the Washington, D.C. Building Trades Council (AFL-CIO), a regional alliance of 15 union locals of electricians, ironworkers, painters, plumbers and others.

As the sixth major gambling site in the state, MGM’s construction signifies the emergence of casinos in Maryland as “a billion-dollar industry,” notes James Karmel, a historian, author and gambling industry analyst. This growth has been aided in large part by the lobbying efforts of local labor, particularly where casino-friendly legislation is concerned. Unions supported a 2008 state constitutional referendum that legalized slot machine parlors; its passage prompted the opening of four such establishments throughout Maryland. And after another 2012 statewide referendum—also strongly supported by unions—granted slot machine operators the right to expand into other types of gambling and to commence 24-hour operation, an expanded Caesars Entertainment Horseshoe site began construction in Baltimore.

All this has added up to a regional gambling boom, Karmel says, with the creation of more than 9,000 permanent jobs in addition to thousands of temporary construction ones. But allying with labor is nothing new for casino companies, who have successfully negotiated deals with labor unions in other locations around the country.

“It’s logical that the big casino companies like MGM and Caesars would bring unions with them when they expand into Maryland," because these same companies are also heavily unionized in Las Vegas and elsewhere, says Karmel. “They are used to having unions ... there is a long tradition of unionization in gambling.”

Indeed, in April 2013, Working In These Times reported that Caesars had struck a deal to unionize most of its estimated 1,700 permanent casino jobs in Baltimore, paralleling its existing agreements in other cities. And Boardman expects the yet-to-be-negotiated labor contracts at MGM’s Maryland location to mirror the “middle class wages and benefits” established by the company’s labor pacts with Unite Here locals at its branches in Las Vegas. He says many MGM entry-level jobs will likely pay about $17 an hour and come with fully paid health benefits.

The opportunity for organizing is so great, in fact, that it may be causing dissension among various unions when it comes to employee coverage. For example, the November 2013 issue of The Seafarers Log, the official publication of the Seafarers International Union (SIU), reported that a joint effort between the SIU-affiliated Seafarers Entertainment and Allied Trades Union (SEATU) and United Food & Commercial Workers Local 27 had succeeded in signing up about 2,500 new union members working at the expanded slot parlors. Sources indicate that some local unions regard SEATU as an intruder into their own jurisdictions. (Representatives from SIU and UFCW declined to comment for this story.)

For the most part, however, with labor peace agreements now in place for Maryland’s two large new casinos, leaders are counting the boom as a success. Fred Mason, President of the Maryland State and District of Columbia AFL-CIO, says the growth is a good example of the kind of gains that can be made when unions engage politicians and the public in job-creation initiatives.

"It's creating jobs and pumping money into the economy generally,” he says. “And, of course, it is important that these are good-paying union jobs."