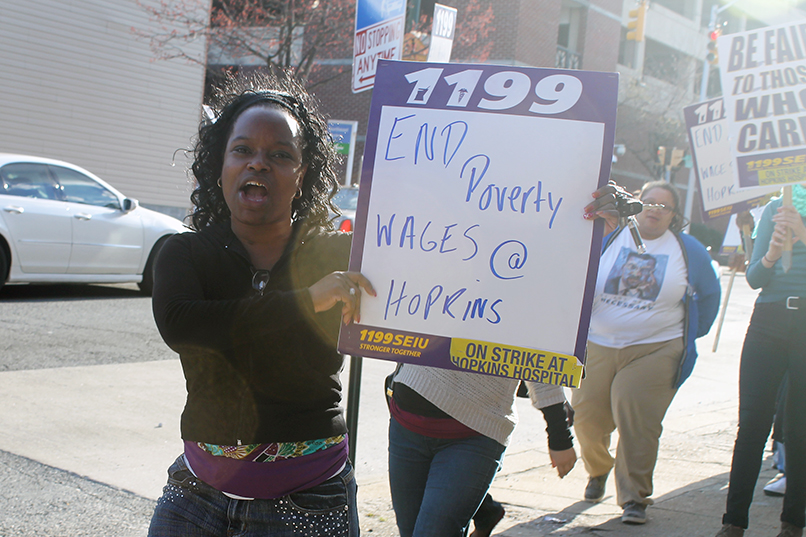 Some 2,000 union workers went out on strike Wednesday at Johns Hopkins Hospital in a protest aimed primarily at exposing low wages at Baltimore’s second biggest employer and one of the nation’s most prestigious hospitals.
Members of 1199SEIU United Health Workers East hit the picket lines at 6:00 a.m. April 9 for a three-day strike provoked by a stalemate in negotiations for a new contract to cover the union workers. The previous contract expired March 31, and renewal talks earlier this week stalled on the key issue of raising wages, according to 1199SEIU spokesperson Jim McNeill.
Hospital executives had received a ten-day warning of the strike, says 1199SEIU Vice President Vanessa Johnson, so there was ample time to ensure that patient care would not be adversely affected. Union members are primarily in maintenance and food service, with some technical workers such as surgical techs. Operations at the enormous Hopkins medical complex are reported to be near-normal with non-union nurses, administrators and temporaries filling in for the unionized strikers. Hopkins spokesperson Kim Hoppe would not respond to repeated inquiries for additional information from Working In These Times.
Labor trouble at Hopkins has been brewing for some time. A year ago, the union signed an unusual one-year contract with the hospital as a stop gap as negotiators wrestled with difficult wage and healthcare issues.
More broadly, the 1199SEIU-Hopkins conflict reflects Baltimore’s yawning racial divide, with the predominantly African-American union members receiving few of the benefits, as Hopkins’ well-paid physicians and administrators prosper. That economic divide was thrown into sharp relief Wednesday with low-paid 1199SEIU picketers demonstrating at the entrance to the hospital’s huge new medical building, which cost the hospital some $1.1 billion to construct.
“Hopkins says they don’t have the money [to lift union wages] but they own most of the community,” charged union member Michelle Horton at an April 9 solidarity meeting of strikers and local supporters. Horton’s comment touched on another raw spot in Hopkins’ relationship with Baltimore’s African-American community: The hospital and related institutions are currently engaged in a long-term effort to re-develop and gentrify the low-income residential neighborhoods that surround the hospital, prompting charges of racial discrimination and unfair dislocation.
Those issues notwithstanding, the focus of the solidarity meeting at St. Wenceslaus Catholic Church on Wednesday night was squarely on the issue of higher wages. 1199SEIU Vice President Johnson said that nearly 1,400 of the 2,000 union members currently earn less than $14.92 an hour, the level at which a single parent with one child will qualify for food stamps.
“Johns Hopkins and [hospital President] Ron Peterson should be ashamed of themselves,” because some Hopkins workers require public assistance like food stamps or Medicaid, emphasizes veteran hospital worker Yvonne Brown. According to a 2010 report in the Baltimore Sun, Peterson earns about $1.9 million a year.
The union initially asked a minimum wage of $15 an hour, consistent with the demands of other SEIU campaigns such as Chicago’s Fight for 15 initiative, Johnson says. Currently, negotiators are discussing a five-year contract, and the union is pushing to get a minimum of $14 for all workers by the final year, and a minimum of $15 at that point for  workers with 15 years or more of experience . The expired contract had the lowest-paid workers starting at $10.71 an hour, with the best-paid earning as much as $27.88.
Hopkins can easily afford the $15 minimum, Johnson says. The union estimates the raise would cost Hopkins less than $3 million in annual payroll expenses, while the non-profit hospital reported a $145 million surplus last year.
Dr. Benjamin Oldfield, a resident physician at Hopkins who led a group of non-union Hopkins doctors, medical students and nursing students to the Wednesday solidarity meeting, agrees with Johnson. “[As medical professionals], we know that financial insecurity leads to bad health outcomes,” he told the group at the St. Wenceslaus hall.. “For a place like Hopkins, which has plenty of money, I’m surprised that they haven’t gotten this one right yet.”
Hopkins, however, is adamant in negotiations that the $15 minimum wage is not affordable, according to Johnson, who says the offers put on the table thus far have been paltry. The most recent would see the minimum rise to only $12.25 in the fifth year of the contract, an offer that prompted the strike action this week, according to Johnson.
That’s just not good enough, adds Wiley Rhymer, a member of the union’s negotiating team. “We’re trying to get our members out of poverty, not keep them in it,” he tells Working In These Times.