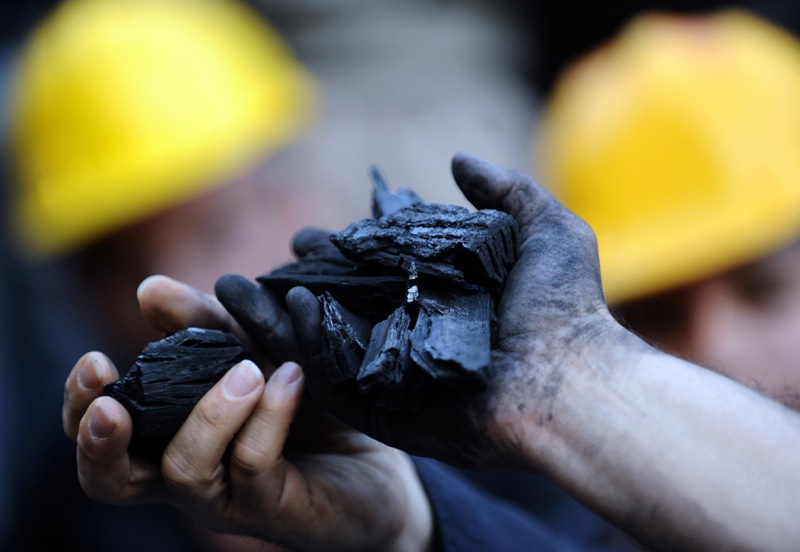 Protesters hold coal in their hands during a demonstration for the victims of the Soma mine accident on May 15 near Taksim Square in Istanbul. Tens of thousands protested in cities around the country. (OZAN KOSE/AFP/Getty Images)

A horrific mining disaster in Turkey on Tuesday claimed the lives of at least 298 workers, a toll that continues to climb. Callous responses from both the Turkish government and the company that operates the mine have triggered widespread anger, leading trade unions to launch a one-day strike on May 15 in protest of the country’s poor mining safety record.

On Wednesday, Prime Minister Tayyip Erdoğan rushed to the site of the accident in the southwestern Aegean town of Soma. “These types of accidents are regular occurrences...there are no such things as having no accidents,” he said, reading from a list of global mine disasters since the 19th century that have had higher death tolls, highlighting cases in China and India. In response, an infuriated crowd repeatedly kicked his vehicle and attempted to encircle him, calling for his resignation. The callousness of his statement triggered a wave of backlash on social media and in the streets, as the official death toll swept above 200 on Wednesday evening and hundreds of the mine’s 5,800 workers reportedly remained trapped. Unofficial reports estimate anywhere from 400 to 600 deaths. (The exact numbers are difficult to pin down because the accident occurred during a shift change.)

Protesters, numbering in the thousands in some major cities, continued to spill into the streets throughout the week holding placards that read, "This is not an accident, it's a massacre.” In Istanbul, Ankara and Izmir, police intervened with tear gas and water cannons.

Soma Coal Mining Co., the private company contracted to operate the government-owned mine, is denying that the accident was due to negligence, but admitting that there were no functioning refuge chambers in the mine at the time. At a press conference on Friday in Soma, company owner Alp Gürkan expressed his condolences and explained that the sole safety chamber was in an area that was no longer being actively mined, but that the company was planning to build a second one when the accident occurred. He noted that Turkish mining laws do not require refuge chambers.

The company says the accident was due to a fire whose causes are still under investigation. Operating manager Akin Çelik said at the press conference that such a fire could have happened in a mine anywhere in the world. Turkey’s Labor and Social Security Minister Faruk Çelik added that there had been no missteps in safety checks and inspections prior to the accident.

Details remain murky, however, and allegations of negligence abound. The Izmir branch of the Chamber of Electrical Engineers, which sent a committee of engineers to the scene to investigate the incident, said the mine’s ventilation systems and poisonous and explosive gas detectors were inadequate and outdated. Others have noted the lack of heat-resistant power transformers and electric equipment

Nedret Durukan, director of the Union of Chambers of Turkish Engineers and Architects, says that mine workers describe long hours underground, lack of rest, lack of safety equipment and inadequate safety training. "Training and education of workers … is viewed as taking away from working hours,” she says.

Turkey’s largest unions staged a one-day strike on Thursday over the mine tragedy, demanding that the government enforce mine regulations. "This is not the first disaster we've experienced. In the past few years, we've seen hundreds of incidents, and we've lost thousands of workers, " the Confederation of Turkish Trade Unions (TÜRK-İŞ) general secretary Pevrul Kavlak said in a statement to the press this week, listing off previous mining accidents in Afşin-Elbistan and Zonguldak

In 2005, Soma Holding took over the reins of the mine from the government amid a push for privatization that began in the 1980s and has become a pillar of the ruling Justice and Development Party’s (AKP) neoliberal restructuring. Recent laws allow the government to sell “royalty tenders,” in which the operation of the mine is awarded to whichever company offers the cheapest coal extraction bid. The coal is then sold back to the government for the market. Some say the profit-driven cost cuts, heightened production targets and slackened government oversight came at the expense of worker safety.

“The private mining sector has enforced an intense working tempo in order to extract more coal, which can result in cracks in worker safety,” Confederation of Revolutionary Trade Unions of Turkey (Dev Maden-Sen) representative Tufan Günay told a local publication. Soma Coal Mining Co.’s Gürkan said at the Friday press conference that the company has a narrow profit margin of only 10 to 15 percent at the Soma mine, and that any increases in profits have stemmed from more advanced production techniques.

While China and India may be typically associated with poor worker safety standards, the disaster at Soma sheds light on Turkey’s shortfalls. According to figures from the Economic Policy Research Foundation of Turkey, more miners die every year per million metric tons of excavated coal in Turkey than in China, where fatality rates have fallen since 2000 as the central government closed small, under-inspected rural mines, instituted new safety standards and cranked up fines for company negligence.

The latest disaster also underscores Turkey’s lack of domestic natural gas and oil production, which leaves it heavily reliant on coal and on other countries for energy imports. Despite an ongoing push for natural gas, coal still accounts for about 26 percent of Turkey’s energy consumption. As Turkey continues tapping into its domestic coal reserves in spite of ongoing mine accidents, Soma has jolted the country into self-reflection not only over occupational safety standards, but also over energy consumption.

Another glaring detail that has drawn fire in the wake of the accident is that two weeks ages, the ruling AKP party quashed a motion in parliament by the opposition Republican People’s Party to investigate work-related accidents at Soma coal mines. Also troubling are widespread, though unproven, assertions that Soma Holding handpicked the union leaders who were representing Soma’s mine workers.

On Friday, the AKP submitted a proposal for a parliamentary inquiry into the accident, though no top managers or company executives have been implicated as of yet. The prosecutors investigating the case have said the managers they planned to arrest had died in the mines.

Finally, labor unions have long criticized big factories and mining companies for outsourcing to subcontractors, which are notorious for lacking regulation and pushing boundaries on employee rights. Soma Holding has officially denied using subcontractors, but journalists in Turkey have raised speculation that it was indeed employing uninsured workers through subcontractors. “This disaster should be a lesson for those who have turned this country into a heaven for subcontractors and for those who have created an order based on exploitation,” said Kavlak.

Sisi Tang, a former student of history, is now a writer and traveler based in Istanbul.