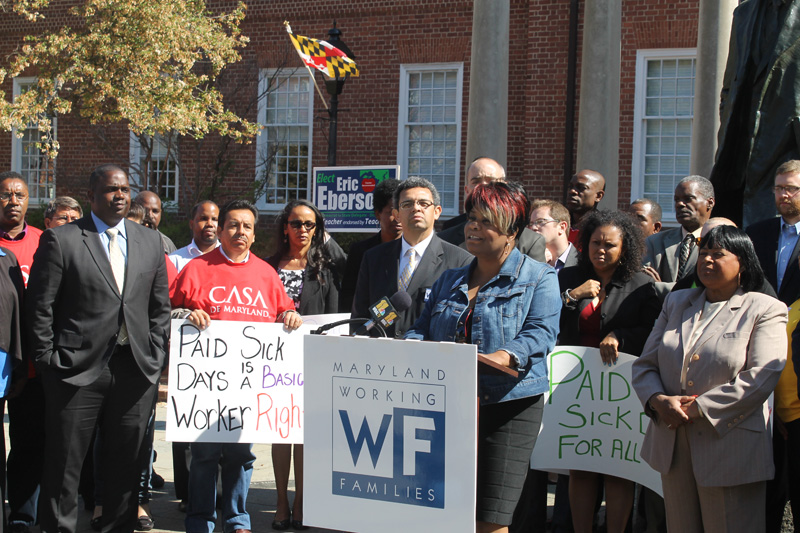 The new organization Maryland Working Families is reporting good results in its first foray into state electoral politics last week, as a statewide Democratic Party primary election drew about 400,000 voters to the polls.

Maryland Working Families—affiliated with Working Families Party, a budding alliance of labor unions and traditionally progressive groups that is now firmly established in New York, Connecticut and Oregon—began its first direct electioneering effort in Maryland this year with purposefully modest goals, says Executive Director Charly Carter. MWF endorsed 10 candidates for the state legislature and concentrated on grassroots tactics to get them elected, she says, forgoing involvement in the higher-profile races for governor and state attorney general. Of those 10, seven were successful in winning the Democratic Party nominations in their districts on Tuesday, victories that are considered tantamount to final election in the heavily Democratic areas of Baltimore and suburban Washington, D.C.

As far as influencing state electoral politics is concerned, Carter tells In These Times, “We’re happy. We think we’ve made a good start.” One campaign proved victorious for a union organizer who used tactics he learned in his four decades of activism to rally support; another led to the election of a high school teacher who relied heavily on his former students to staff his campaign.

These are the kinds of people, Carter says, that Maryland needs in the legislature: “People who understand the issues of working people, and are not afraid to fight” a system of entrenched power.

The MWF endorsement translated largely into boots-on-the-ground assistance to the selected candidates, Carter explains. She estimates that the MWF contributed $4,000 worth of aid in the form of logistical, technical and individual resources to each candidate.

“We knocked on close to 15,000 doors in the course of five weeks,” says Carter. “We provided advice and support, especially for those who were running for office for the first time.” For candidates without access to financial assistance from corporations or entrenched lobby groups, she says, “Our idea is not to write checks, but to provide the kind of grassroots support needed.”

That kind of help was indeed valuable, says Cory McCray, one of the victors in a race for the Democratic nomination to a seat in the Maryland House of Delegates. McCray, a journeyman electrician from IBEW Local 24, is a first-time candidate for office in a central Baltimore district that includes some low-income neighborhoods hit hard by the city’s long-term decline. “The WFP is a big asset. Not only did they show up a bunch of times with a van full of eight or 10 volunteers, but it helps to be able to sit down with knowledgeable people to talk about communications strategy or the mechanics of a field operation,” he tells In These Times.

The interest of MWF in issues like raising the minimum wage makes it a good fit for his district, McCray says. “When you have the ability to make a good living wage, you will have a successful community,” he says, in reference to some of poorer areas of his district. Given the chronic structural problems that often plague such low-income areas, he says, “When you don’t have that, you can’t really make progress.”

As an apprentice in a five-year Local 24 training program, and later as a regional organizer for the national IBEW organization, McCray knows firsthand how important stable pay can be. “I had a chance for a steady income that a lot of kids that I came up with didn’t have,” he says.

Minimum wage issues will be at the top of the agenda for the MWF when the Maryland legislature convenes again in early 2014, Carter adds. After working hard earlier this year to pass a bill to raise the state minimum to $10.10 an hour, activists were ultimately disappointed to see some of the more progressive elements of the proposed bill stripped out of the final version. An annual automatic cost-of-living increase in the minimum wage, for example, was a MWF goal that was frustrated by more conservative Democratic legislators, she says. Next year, the MWF plans to reintroduce a revised minimum wage bill that includes the cost-of-living increase once again.

Aside from the promising start in selected legislative races, Carter says many of the MWF’s union affiliates were also pleased this week to see primary voters select Anthony Brown as the Democratic nominee for governor. Brown, who has served as Lieutenant Governor for the last seven years under Gov. Martin O’Malley, had nearly universal support from the state’s labor organizations in his primary contest against two other Democrats. Carter says it is very possible that the MWF will get involved in gubernatorial politics in the future; however, it stayed out of that primary this year to concentrate on the legislative races.

The MWF’s formal entrance into the state’s electoral politics is one major way pro-labor progressive Democrats in Maryland are fighting to implement leftist legislation. Gustavo Torres, president of CASA in Action, the elections arm of the Hispanic advocacy group Casa de Maryland, explains that on a state level, the Republican Party is weak and disorganized—so it’s conservative, pro-corporate Democrats who pose the most serious obstacle to progress.

“I believe there are some people in the Democratic Party in Maryland who are very progressive, but there are also some who are not … The minimum wage bill this year is one specific example of how disappointed we are in the establishment,” Torres tells In These Times.

Torres’ group is among the MWF’s strongest Maryland backers in terms of finances and personnel. He says that support is part of a long-term strategy to build support for policies important to the Hispanic community. Aside from the minimum wage, Casa is also working with the MWF to create policies preventing police enforcement of immigration regulations that harm Hispanic families, and to pass a law that would allow undocumented immigrants to gain access to healthcare programs like Obamacare.

Overall, Torres believes that leftist Democrats must push from within their own ranks to enact policies that will help all Maryland residents, not just those with lavish campaign contributions to spare.

“The struggle is inside the Democratic Party,” he says.