A Staples Diet for Postal Workers 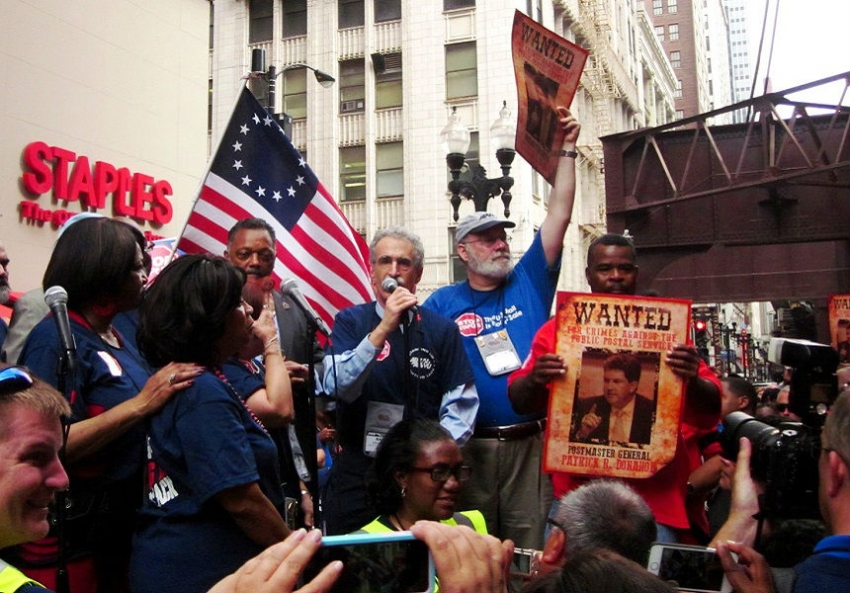 More than 1,000 postal workers and allies gathered in downtown Chicago on Tuesday to promote a boycott against Staples as part of the American Postal Workers Union’s “Stop Staples” campaign. Late last year, the office supply giant set up “mini post offices” inside 82 outlets around the country, provoking anger among workers concerned for their salaries, their jobs, and the integrity of the postal service.

Tuesday’s protest, the largest of its kind since the National Day of Action on April 24, was held in conjunction with this week’s APWU convention. The rally’s temporary stage—erected in front of a Staples store and below Chicago’s elevated train tracks—hosted a pageant of labor leaders who spoke in turn, among them Richard Trumka, president of the AFL-CIO; Jesse Jackson, leader of the Rainbow PUSH Coalition; and Mark Dimondstein, president of the APWU, who told the assembled crowd that “we’re gonna win this fight” against Staples office supply chain.

In November of last year, Staples made a deal with the United States Postal Service (USPS) to launch a Retail Partner Expansion pilot program, privileging Staples with the first nearly full-service postal counters outside of federal post offices. Participating Staples stores can offer a majority of the same products and services found in post offices, from stamps to USPS Tracking and Insurance.

It was the latest move by the USPS to expand its services through cooperation with private companies. “If we have [federal] post offices that are open from 9 to 5,” explains USPS spokesperson Darleen Reid, “we’re going to be looking at retail locations that are open until 9, or retail locations that are open over the weekend.” This would allow customers access to USPS services even when their local post office is closed; the financially troubled organization has said this kind of partnership “allows for the USPS to compete in the marketplace.”

USPS workers, however, say this is not the way to protect the institution. Angered by the fact that Staples staffed these private post offices with its own non-union, less-trained, and lower-paid employees, the APWU denounced the program as “privatization” of the postal service and called on all its members—as well as anyone else in need of office supplies—to shop elsewhere.

The APWU alleges that postal workers are already feeling the harmful effects of the pilot program. According to a May 29 union press release, 21 out of 39 post offices in the San Francisco area—an area with eight postal Staples counters—saw their operating hours reduced by 30 minutes to an hour. “They’ve got a sign on the door that says ‘We’re closed, go to Staples,’” said Dimondstein in the press release. “It couldn’t get much more obvious than that.”

The union sees this transfer of labor away from federal post offices as a conscious decision by USPS leadership to save money by replacing unionized postal workers—whose hourly wages average about $25—with Staples sales associates, who typically make less than half of that.

In addition to advocating for members' financial security, the union has also cited concerns over the integrity of mail delivery through these services. When a customer drops off a package at Staples, it remains in the custody of Staples employees until they hand it over to the USPS to be delivered—which, the union is quick to claim, means it’s not legally protected.

“The main thing for the public to know,” explains Madison-based mail-processing clerk Christopher Degeyter, who attended Tuesday’s rally, “is that when you drop off your letter at a post office it’s secure. It’s been this way for 100 years.” Like military enlistees, postal workers must pass written and physical examinations and take on oath to “support and defend the Constitution of the United States against all enemies, foreign and domestic” before beginning their job. In other words, they pledge to keep the contents of your mail safe to the best of their abilities.

By contrast, Degeyter argues, "When you drop it off at Staples, it's not considered mail. Therefore, it's not secure until we get it at the post office or it's in the hands of a postal employee, such as a letter carrier or a USPS window clerk."

APWU has been dedicated to pushing the Staples boycott since its unofficial beginning on April's Day of Action. Their efforts are paying off: The boycott has won endorsement from the 1.6 million-member American Federation of Teachers (AFT), as well as from the largest unions and union federations in the country, including the American Federation of Labor and Congress of Industrial Organizations (AFL-CIO); American Federation of State, County and Municipal Employees (AFSCME); and the Service Employees International Union (SEIU). And it's been gaining momentum just in time for the back-to-school shopping season, which accounts for a big chunk of Staples’ sales.

Just last week, however, Staples and the USPS reported that they intend to discontinue the pilot program. Instead, Staples will transition by the end of August to the established Approved Shipper program, which traditionally offers fewer postal products and does not guarantee the USPS exclusivity. The Wall Street Journal speculated that the move was a “rare win for the unions,” but both Staples and USPS have declined to comment on whether or not the boycott was a reason for ending the pilot. USPS claims that the decision was simply “based on the information learned from the test.”

The APWU, for that matter, is also not interested in declaring victory just yet. It has vocally declared that this reclassification of Staples’ services is just an effort to defuse the boycott. Dimondstein wrote in a July 14 press statement that while “this attempt at trickery shows that the ‘Don’t Buy Staples’ movement is having an effect,” he believes that the program will change in name only. “If it looks like a duck, walks like a duck and quacks like a duck,” he wrote, “it’s a duck.”

In fact, USPS spokesperson Darleen Reid confirms to In These Times that “the Staples program, as it moves to the Approved Shipper program, will be offering the same exact suite of services that it offered before.” She also says that Staples will continue to offer more services than many other Approved Shippers.

“In the case of Staples, because it found the products it was offering during the Retail Expansion pilot were successful, it decided to go ahead and just leave the same suite of products. So, to the customer, there will be no difference,” she explains. The one change she did specify is that Staples will no longer be required to exclusively offer USPS products at its mail counters.

Even if Staples were to scale back its services, though, the APWU would not call off the boycott. “We’re in this until they’re out of the postal business,” Dimondstein tells In These Times.

Melissa Rakestraw, a member of the National Association of Letter Carriers Branch 825 in Oak Brook, Illinois, believes that the drive to push Staples out of the market has been complicated by the fact that one of its biggest competitors, Office Max, currently has more than 1,000 stores participating in the aforementioned Approved Shipper program, which began in 2005 under the Bush administration.

“The APWU is fighting an amazing battle against Staples and USPS management to beat back the outsourcing of retail counter services,” she writes in an email. “Unfortunately, the genie was let out of the bottle years ago, when USPS began to allow postal products to be sold outside of our local Post Offices.”

Dimondstein, for his part, was elected APWU president only a month before the USPS announced its deal with Staples. Since then, he and his Member First team have been, as Bloomberg Businessweek reports, “more stridently opposed to [USPS’s leadership’s] efforts than their predecessors.”

And though they and other APWU leaders recognize that the problem is more wide-ranging than Staples alone, they view the corporation as an ideal starting point in the fight to reclaim the USPS.

As APWU organizer Rich Shelly explains, “Our position is this: This is a new administration. We’re taking action against the privatization of the US Postal Service. We’re dealing with originally Staples’ pilot program and now the move between Staples and the USPS to go to the Approved Shippers program. And then we’re going to put our focus on all the other privatization attempts, whether they’ve been in place for a while or whether they’re new.”

For now, Dimondstein has been heartened by the support from workers in other sectors. “I’m not only hopeful, I’m almost sure it’s going to work,” he tells In These Times about the campaign. “We have the entire labor movement behind us.”

Referring to AFT’s endorsement in particular, he adds, “Teachers are the biggest customers at Staples. Staples has got to get the message: Get out of the post office business entirely and go back to selling office supplies and we’re fine with you. Stay in the postal business? We’ve got a beef.”

Other speakers at the Stop Staples rally agreed that the campaign’s impact extends beyond USPS employees. “My father died working for the Postal Service,” said Jesse Jackson. “I’m a postal service kid.” After an enormous applause died down, he went on to link the loss of union jobs such as postal work to violence and racism in Chicago and elsewhere. “Postal workers and teachers and believers—if we close ranks, we can win this fight. We can not win this fight alone.”